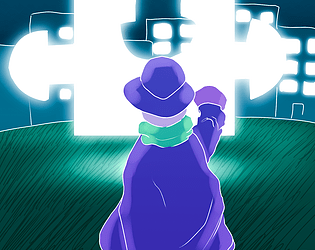 Ranked from 94 ratings. Score is adjusted from raw score by the median number of ratings per game in the jam.

In what way does your game fit the theme?
you collect the key piece and then you walk the path you walked in reverse

Did you write most of the code yourself and made all the assets from scratch?
yes

I love it , Just love it

would like to hear what u think of my game :)

This was a nice polished game. This game has some potential and it  motivates me to finish my unfinished jam game for this jam. I liked the idea that the movement/velocity rewinds instead of the actual position.

The only thing is the transition from being idle to walking, and waiting for the movement to accelerate feels slow.. Probably could make the transition a bit faster.

Oh and also while I did enjoy it some of the levels I actually managed to wing it on pure luck so you may want to change the difficulty a bit.

Other than that it was nice.

nice game! the atmosphere and art really added alot to the feel of the game. I really like the puzzles with the lasers, it was cool seeing the charterer dodging the lasers as they turn on and the puzzle transition was really pretty.

the puzzles were good but maybe they could have been a bit more innovating, some felt very basic. and also the jump felt very weird and not smooth.

(also, by your names, I assume you are from Israel... I am also from israel! Its nice to see other Israelis make games here!)

Submitted
Back to the Button
LikeReply
SchnekorinoSubmitted199 days ago

First of all the art looks just amazing!

The game was great fun too but the jump felt a bit weird sometimes and was not so smooth. The music and atmosphere were great!

I really enjoyed this game, I'm amazed you managed to make all this and so many levels in only 1 week! I managed to complete the game too :D I liked what you did with the rewind mechanic here and I thought the game looked really nice. Oh and I love the puzzle piece transition between the levels!

Some things that I feel like could be improved are:

- Player movement: The jumping didn't very smooth or reactive - I had to wait a bit after pressing jump before the player actually jumped. The slidey movement I found a bit weird too, with the acceleration and deceleration. The jumps betwen singular spikes was very hard to get right because of this.

- Rewind: Watching the whole thing again in rewind felt quite long and slow, it would've been nice if it was sped up especially if the player was going to die anyway.

- Jump key: Don't know if it's just me but having it on the Z key was super weird. Maybe W, up arrow or space would've been better?

Other than that, really great job! The game felt super polished.

Submitted
Run It Back
LikeReply
Arihan10Submitted202 days ago

This one takes almost all stars from me! The concept is super interesting, and the execution feels supremely polished. All art looks amazing, and the audio part is also superbly done. Level design is a bit below 5 starts though, as the levels usually don't require any thinking from the player and more often than not (since by the time most mechanics are properly introduced just a few levels are left), simply involve timing jumps. Besides that though, which by the way is fully expected from less than a week (in fact it's more than I expected), quite literally, the only piece of feedback I have for this game is the controls- why, just why arrow keys :P

But in all seriousness though, making the jump Z seems like a pretty arbitrary decision. It would make sense if this was a 2-player game, but this isn't.

Other than that though, perfect game! Good job to the team behind it.

Really nice, polished game. I love all the assets, the character looks and controls great!

The theme is spot on and the rewind mechanic in this game is very original compared to others.

Really nice game, some of the levels really made me think. I really enjoyed the music and the graphics, overall the game was very fun

Nice graphics and soundthank, loved the atmosphere but IMO the rewind mechanic here is a bit pointless because you are just watching how you played the level and avoiding the obstacles like they where there

Really nice concept and interesting way to use the theme in a unique way. Nice job!

Submitted
Back in Lab
LikeReply
GonbadSubmitted203 days ago(+1)

The game looks great and the story is nice, but the slow controls really hold it back

This is a strange review for me haha, I've rated it very highly in every category, yet I'm not sure if I feel that way about the game overall haha

>All the individual elements: The graphics were crisp and clean (although perhaps some more contrast between background tiles and foreground tiles would be useful; it was occasionally hard to tell what you could jump on at an immediate glance). The audio was excellent with beautiful music and great sound effects, I liked the change in background music too.

>Great use of the theme and a creative idea: I liked the idea of having a puzzle where you had to take into account your rewind actions, the levels with the teleporters were definitely the most interesting (more of that please).

>The platforming was decent, with some good challenges for timing, and it seemed you compensated for 'near misses' too because i didn't have any of those frustrating moments when you accidentally bump your head and then fall or similar.

Things to improve/Things I was uncertain about:

>The biggest problem to me seemed to be the competing aims of the game: it's both a tight platformer (where little differences in timing/spacing mean the difference between winning/losing and where you are on the clock), and a puzzle game (where you ideally want to be able to solve the puzzle at a leisurely pace and dont want to be punished for a lack of dexterity). It was nice that you didn't start the clock till the player moved though, so that at least helped with solving the puzzle before starting the run. >With the puzzle side of things: I feel like in a puzzle game you should try to do three things 1. Give the player all the info up front to solve the puzzle,  2. give the player as much time to solve the puzzle as needed and/or allow the player to reset the puzzle if they make a mistake rather than forcing them to lose, and 3. dont require players to meet a dexterity requirement to solve a puzzle. I think you did 1 alright after the player had already died once, but it required dying at least once on the rewind to know what the new mechanic was (so that was a little unideal); for 2 they could think about it before starting the clock, but unfortunately the player had to die if they made a mistake, but at least the reset was quick (so not that bad); but unfortunately for 3, as I mentioned before, there was a fairly high dexterity requirement to solve the puzzles (if they knew what they had to do, but couldnt get the timing/jumps right then i imagine that would be quite frustrating for people).  Fortunately for me I'm competent at platforming and like puzzle games :) I just think that it might be a bit niche as it is essentially only for people who like puzzle games and platformers, not one or the other.

All that said (and I know I just wrote a lot haha, sorry, just wanted to be comprehensive with my feedback), I think it was a really good game, with great elements in it, one of the best I've played in the jam!

thank tou for your feedback! As for the timer, it was rather a technical issue then gameplay one. We will try to make it better next time.

Amazing AMAZING game. The visuals were Lovely and the brilliant use of Unity's Particle System was truly awesome. I loved the game. I absolutely loved the game. It is one of the best looking games of the Jam. Just two problems. First, the character stops when you land from a jump, so you should change that to create a flow to movement and also, it was very short. I just wanted more. Really hope that you continue the game and finish it.

Could you please rate my game too? Its not as good as yours but it would mean a lot to me if you rated it.

Submitted
Back To Square 1
LikeReply
LordDiegoSubmitted204 days ago (1 edit)

Lovely puzzle game, with a nice calm music. Very good rewind mechanic implementation! Well crafted level! Just one think.. the tiles used for the background should be darker, or different from the once used by platforms. Sometimes they mix. But only that small thing.
Last level was tough! But manage to complete it.

An interesting and clever little puzzle game with a gorgeous art style, well done sound design and an overall very polished feel to it. Definitely one of my favorite games of this jam so far and one that i will keep for a second playthrough.

My only issue with your game is that it quits with one press of Esc, without any warning, or beforehand information that that will happen. So, i lost some progress because of that, but it didn't stop me from starting new. A level selection menu, or just a simple "do you really want to quit and loose all your progress?" window would have been nice.

Anyway, i still loved your game and will rate it high. Good job :)

An interesting and clever little puzzle game with a gorgeous art style, well done sound design and an overall very polished feel to it. Definitely one of my favorite games of this jam so far and one that i will keep for a second playthrough.

My only issue with your game is that it quits with one press of Esc, without any warning, or beforehand information that that will happen. So, i lost some progress because of that, but it didn't stop me from starting new. A level selection menu, or just a simple "do you really want to quit and loose all your progress?" window would have been nice.

Anyway, i still loved your game and will rate it high. Good job :)

Definitely a great puzzle game, the rewind mechanic was a little slow but overall I think the puzzles made it fun to use. Everything was introduced to the player in a smart way, so none of the puzzles felt too difficult. The art and music is great, although I did think the environment was a little too dark before getting the puzzle piece. The one thing I didn't really like were the character movements. I didn't like that the character lost all momentum when hitting the ground, I think it's better to give the player more control in the air instead of forcing them to stop immediately after every landing. The character's jump also looked weird, I think squashing and stretching on the landing and pushing off would make it look more natural. Overall very well done!

i enjoyed your game from the sound to the simple design, to the graphics. wow, well done