Made for the Brackeys Jam 2020.2!
Submitted by PeteLovag — 1 day, 17 hours before the deadline
Add to collection 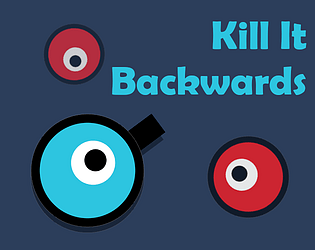 In what way does your game fit the theme?
The bullets that you shoot need to be "rewinded" in order to damage enemies.

Did you write most of the code yourself and made all the assets from scratch?
All of the assets and code were made by me during the jam.

Except for the what I assume was the final boss it was really fun :) Good job!

Submitted
A ninja in time
LikeReply
PeteLovagDeveloper108 days ago(+1)

You're welcome and feel free to play my game as well :)

I will check it out!

I really liked your game and have nothing to criticize other then:

Sounds fit, graphic was simple but good, the game made fun and fitted the theme. Awesome.

Felt dumb playing this game, I didn't realize you could shoot in the opposite direction and then rewind the bullet so that it goes past you and into an enemy until the last level.  So, that felt way more challenging, by trying to shoot a bit off of the enemies and then bait them into the path of a bullet.

Anyway, that was a nice game. It feels like a beginner's game, but a really well made one.
By that I mean that you've got your core gameplay pinned down, but the polish is lacking :
-You start by telling the player to shoot but don't tell that you use the mouse/LMB. Which is weird since you though about telling that RMB is the rewind.
-The fact that there is no music makes the game seem barebone. Next time you should try to find a public domain BGM, at least. Same for the background, you should try to use a generic image if you can't draw, but it's always better to not have a simple unity background/basic rectangles as walls.
-There is no UI or infos about your progression. That can be a choice, but something like a message in the middle of the screen telling you at which wave you are when you start could make it a bit better.
-There is no way to quit your game beside alt+F4. Be careful with that, it's easy to overlook but it'll be needed in your more complete games. In the same vein, the ending lacks a "get back to the title screen" button.
-Finally, for the boss, you should be careful with your spawning of lesser foes. It's really frustrating to die because an enemy spawned on top of you. So, you should try either wait if the player is too close to a spawn point, or make the enemy appear a bit further away.

So, as you can see, it's all small details, but it's those details that makes a game go from good to great.

So, overall, really good job, even more for what seems to be your second game.
Next time, try to think more about the polish.

Thank you for the detailed feedback!

I wanted to add music but I didn't have time to make it, and since I already made everything myself I decided not to add it.

Only after I submitted the game I realized that the boss level was too hard, so I'm reducing the difficulty on that a bit for the new version. And I did think about adding spawn blocking to the enemies at the boss level, but I was really running out on motivation, even when I made the boss level.

The reason I don't add a quit button is because I don't really use it in other games. I either quit with windows button + close window option on the taskbar or just alt f4. But now that you have mentioned it I will add it to my future games.

really well made game, the mechanic is very well thought out and fun

I really like the game, but I can't beat boss.

it is simple yet so good. nice approach

can't  play much due to mouse issue.

but it is satisying and minimalistic.

thanks for rating mine

The movement was really smooth, the bullet physics as well, very good job!!

Beat the whole thing. The boss was really hard :^)

Try adding some music for immersion. Great game, hope you had fun making it!!! ^^

Really loved the mechanics of the game. Add some music. And try to add a WebGL build.

Submitted
It's rewind time(Back in 80's)
LikeReply
PeteLovagDeveloper114 days ago

Thank you! Yes I'm working on both of those things!

Nice game, the shooting mechanics are well done, and enemies are fine. I would have loved if there was a final level with all the things you had (purple boxes, red boxes, etc) before the boss.

also, you should try to add some music. It makes a big difference if there is.

Thank you! If I ever make a new version I'll definitely add music!

Cool concept, though, if you get timing right, you can just shoot straight at enemy, and change it last second, it would need some balancing, also you should add a cooldown to shooting, it can be broken with auto clicker

Thank you! Yes I know about that bug... I'll try to fix it in a later version.

Nice! I loved the idea. It's kind of unintuitive and I found myself trying to position myself where I wanted the shot to go, but I guess after a few more levels I'd get used to it.

Submitted
Attack of the RNG!
LikeReply
PeteLovagDeveloper114 days ago(+1)

Oh snap! This is a very clever idea.

Feedback: after playing for a while, I realized a way to trick the game. I shot the enemy normaly and then right after the bullet almost hit the enemy i rewind the bullet, so the damage applied. Just thought to let you know.

Thank you! Yes, I know about that bug... I didn't fix it, because i thought people wouldn't notice it... I was wrong

LikeReply
That Indie DudeSubmitted115 days ago(+1)

It never hit me that even this could be done. Very interesting take on the concept.

Do you like games that make you rage? try my game it will be worth your time.

Thank you! I'll try your game!

The graphics are really good! I really love the creativity in the rewinding mechanic!

love the visuals and the creative take on the theme good game.

This is a really awesome mechanic with a surprising amount of depth to it. I also love how you implemented the different colors. Great work.

It's a really interesting mechanic because you have to think about where your shots go, going back in time. The graphics are simplistic but this kind of game doesn't take away from it at all. I could honestly see this game being expanded into a full fleshed bullet hell. On that end, I'd recommend making the whole game more exciting and punchy with music, sound effects and faster paced gameplay.

Thank you for the feedback! Yes, I wanted to add music, but I only realized that this jam even exists on Tuesday... And I needed to submit this game almost 2 days before the deadline because I had other stuff to do on the end of the week... I'm definitely going to expand on this idea once I have time!