wow. Thanks a lot. I will check that out.

By the way I played your game. The dice roll and unwrap is satisfying and you did a great job making two mini games in the game.

i just tried to balance the randomness and i was very very wrong. :)))

Do you think the jam demands a lot of balance due to the randomness?

looking forward and wish you the same.

I should learn javascript too and doing things from scratch has been concerning me from the beginning. But this might help me in a job that i might start in the next few months

I think I'm gonna spend today doing basic movement and camera so if it works out then I might continue. thanks for the heads up.

Im using threejs for this jam. It is used to make 3d websites and games. And it is not an engine. Used godot and unity before (not completed any project tho:(()

Have you heard of Threejs?

Is used, any tips?

Any experience of using a different software other than popular ones like unity, unreal, godot, gamemaker etc.

the puzzles are really good and each solution is different from the others.

as the level size increases, it gets annoying not knowing what block would pop up when an object goes to its place. so the player would lose the level instead. if the popping-up blocks appear transparent from the very beginning in a colour a respective colour then the player could win the level in a single stretch giving much more satisfation

loved it. found it from the jam (i am a participant too). 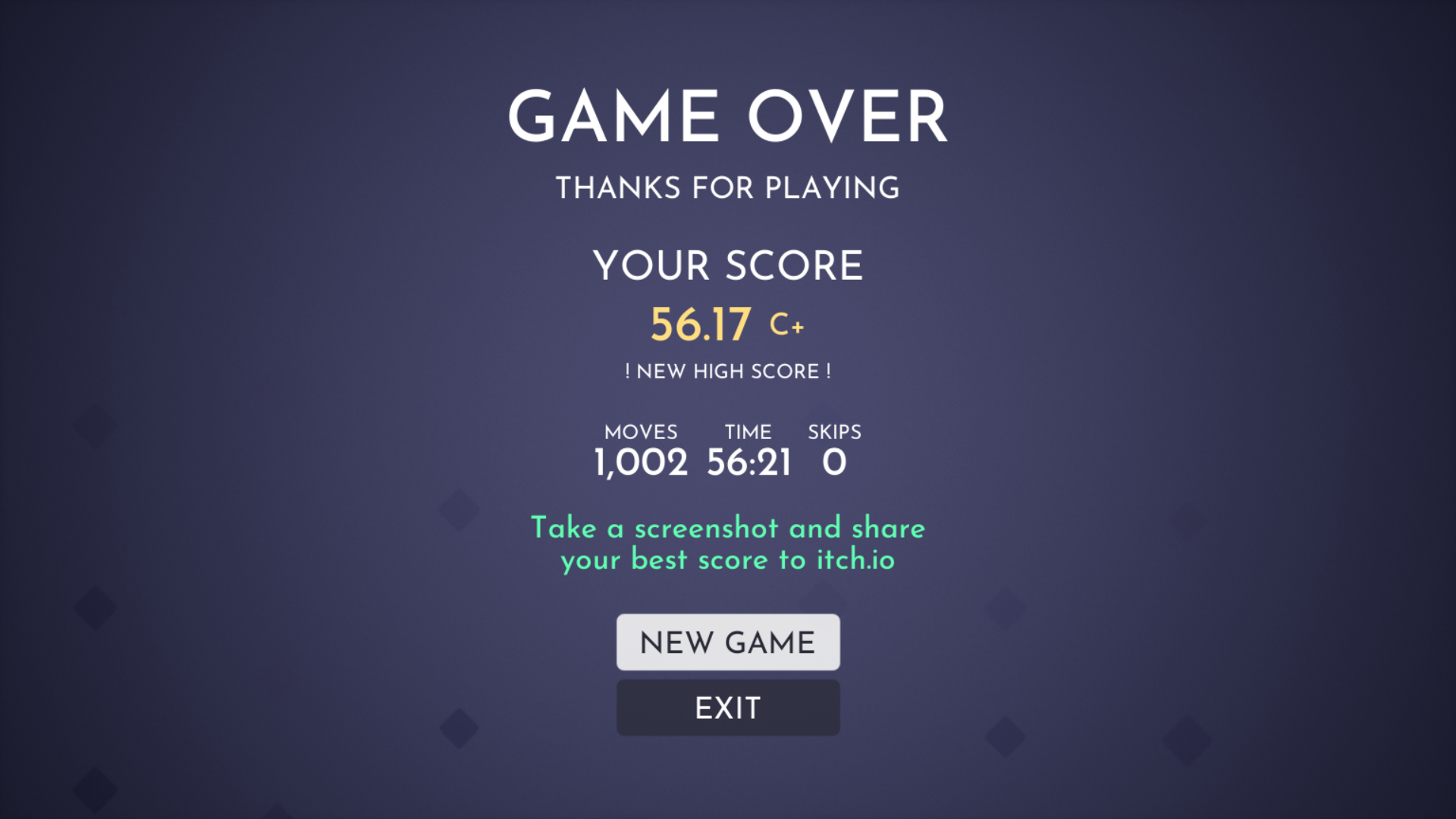 Grid-based puzzlers are always my thing

my favorites in this jam and great puzzles and level design too.

felt the movement could respond to much faster input.

hey. played your game in jam.

im just curious of something other than the great gameplay.

i pressed 'H' a few times and some parts of the texts appeared and some do not. just wanted to notify you. here are some pictures. 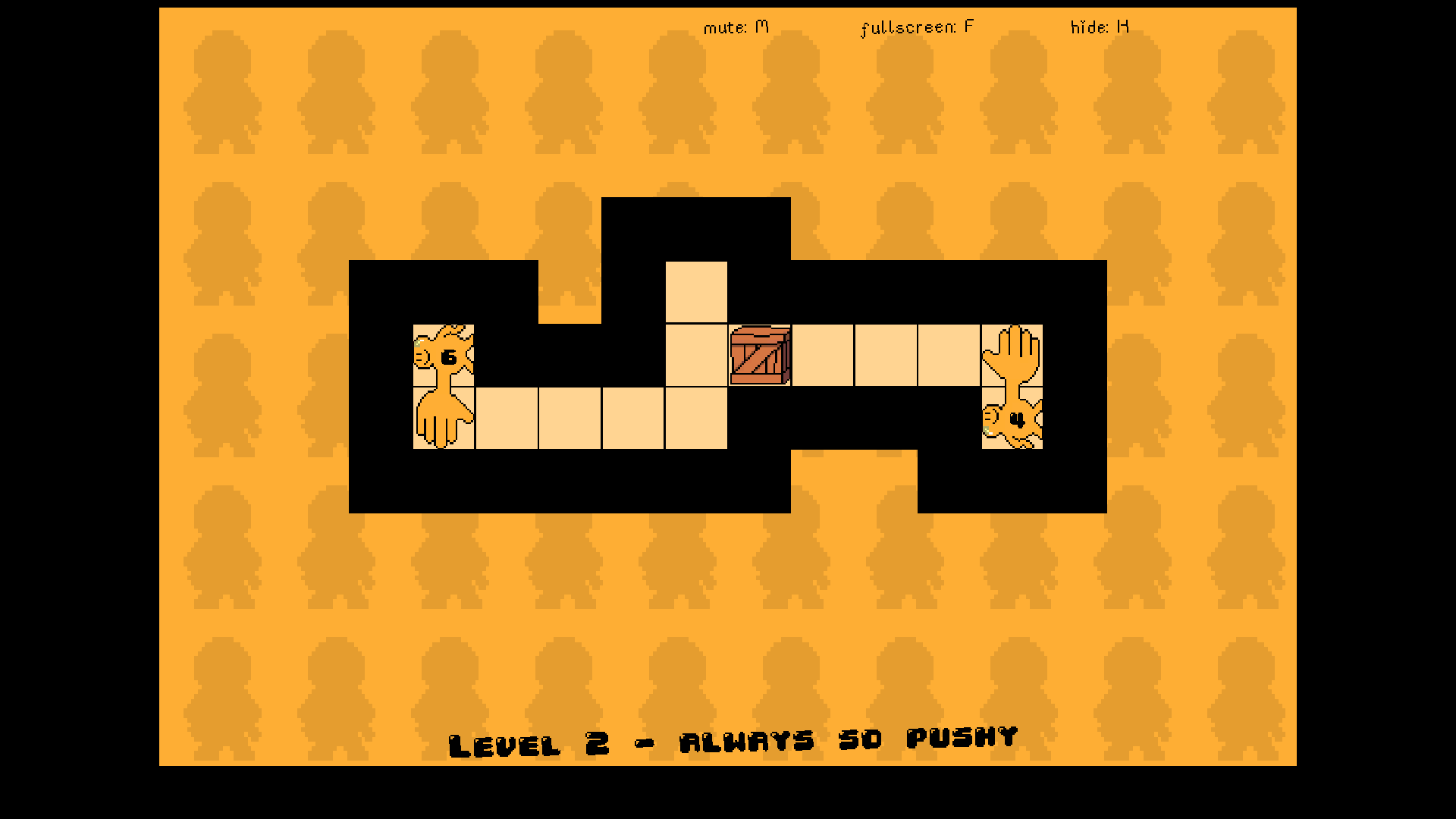 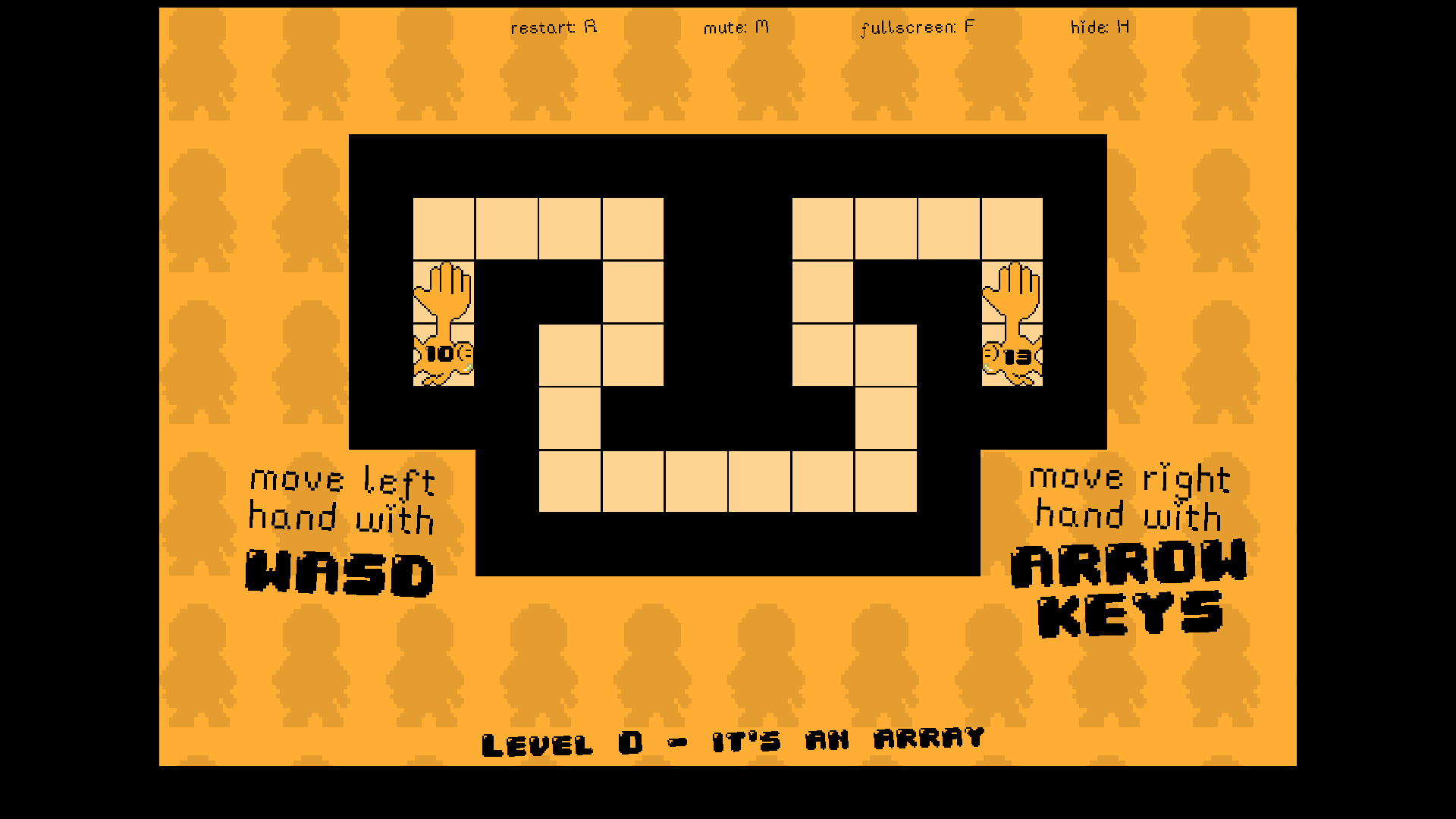 great game. I am a puzzle game fan. so kind of finished in minutes.

For the game, everything fell right into place. great art and music. the undo, hide buttons are great.

felt the length or move count could be displayed on the hand rather than the person.

Thanks a lot for playing.

Thanks for the valuable feedback

I assume a better difficulty curve or level design could change that.

the game is currently too random.

thanks for playing my game.

And that is a wonderful feedback.

oh good to know you liked it.

It was not purposeful must be because of bosca ceoil

thanks you for going to such detail.

The level you got reset on is the last level so you did not miss anything and a lot people faced that problem.

Im not that great with music but just tried doing it on own, hoping to improve over time (will take much more care to make music that amplify game in future)

Thanks for enjoying the game. Glad you liked the art style. Kudoos to you too for trying own music

will check your game soon.

I did thought of adding undo/quit buttons and in the end it just didn't happen.

i thought of adding a small portal, on top of moving blocks, that rotates when the block is connected to any main portal and connecting the path after winning.

the goal is left for player. Felt it can be figured in 1 or 2 levels

oh, i might have to check that level again then.

i think it was a common problem with isometric view. everyone prefers directions in a different way.

glad you found it good. thanks for your detailed comment.

Far-end clipping felt like a pro and con: it made the current decision matter more but also losing the level because of that felt unfair.

the mouse can be changed to some other icon or making a popup when it hovers over the switch might be great. but it felt fine after the first level.

the math model of scoring felt hard. I felt it can be toned down to 10's to make it look easier or maybe a comparative model like

a child is twice important than a person

old person is half important than a person

hinting to make it easy

a moving meter that shows the better decision just seconds after you move on a track but not the entire solution so increase or decrease the weight of following decision.

felt red strings can be increased as the levels increase.

the physics are fun to watch

hey. read your page and played your game.

from what I saw: the placement of islands felt good and the growing animation is good too.

I think rotating the player would be great. and for the camera, clicking a mouse button might feel better than shift.

hint: you just make them fall to the ground and arrange them. they fall if there is nothing below them including player

this is one of the best puzzle games I played in a while.

I wanted to implement some of these mechanics in my own game a while back but somehow failed. glad to see this entry.

thanks. that was first on my list. but the player character needs more justice in design.

ok, that must be why I got confused. and it mostly happened when the player goes out of bounds

yeah, I thought of camera movement but it was last on my list and I kind of stopped in middle of my list

pretty simple. but my brain (i don't know how) could not differ between the clones and player even with the player glowing.

how is the theme implemented? ( i might have missed it)

great art and idea. the sound effects are cool

I got into a grid with rock on edge, and could not move in any direction so eventually destroyed.