Entry for the VimJam gamejam. A Game about collecting various creatures, inspired by Digimon, and combining them.
Submitted by Seth Tal — 5 hours, 52 minutes before the deadline
Add to collection 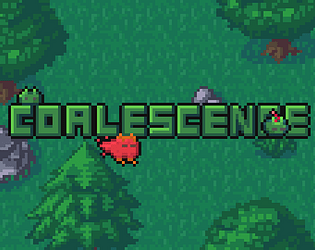 How does your game utilize the limitation and theme?
The player's goal is to collect creatures and combine them together to create new ones.

Very cute concept and gameplay. I agree with others has room to grow and it may be cool to see larger versions of the characters once combined as I can see there has been a lot of work on them. It feels quite addictive and I look forward to seeing what more things you make in the future.

Thank you, I have been having thoughts about whether or not to maintain the 16x16 artstyle I started with. I think for some of the early creatures it makes sense and works well, but for the later creatures I wasn’t all that into it. Whoever originally designed the Digimon generation 1 sprites really knew what they were doing, and if I try and emulate it too much I’ll just end up copying the work of someone better.

Now this is cute. Really nice idea, and I'm hoping all the 'not implemented' stuff means you're still working on it? Think this really has legs, and I'd like to see more.

Like I mentioned bellow, seeing lots of positive comments and feedback has been highly motivating for me so unless I loose that motivation because of school or work I am currently rebuilding and continuing the project in my spare time. Thank you for checking out my Jam submission! 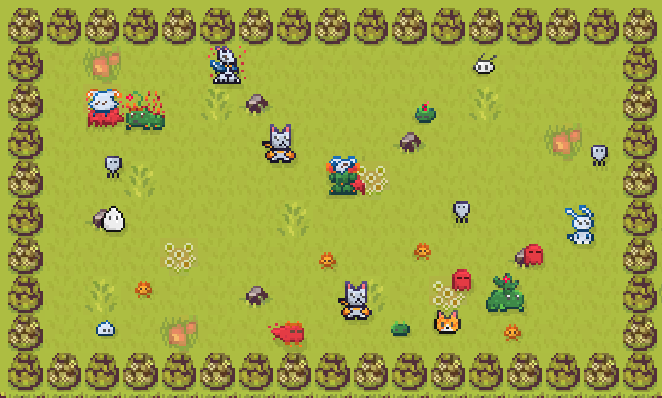 So far this is the only game I've come back to play and finish. kudos!
xD this game is soooo simple but it's really cute?

I'd recommend allowing the player to grab multiple of the same type of mon.
And the cat face doesn't appear enough.

Seeing some of the new comments and positive feedback is very motivating for me. After VimLark’s stream the other day and getting more feedback on the game I am back to working on it further. I am essentially recreating it from the ground up at the moment only cuz Jams have a tendency to make me write sloppy code. My goal is to have a full working demo of the idea I had originally intended to showcase for the jam. This demo I would ideally like to have done by early December. Thanks for playing my game. I didn’t expect people to play it this much :)

Hey, I liked the idea and would like to see more :D

as it stands now, as others have mentioned, more feedback could be welcome when you complete or fail something, also some info if you already merged creature x with y would be a helpful.

A cute concept reminiscent of the influences you described, but lacking a lot of clarity/feedback that made the experience a bit awkward.
-Favorite part was the home play area for the creature you had collected/combined together, as it helped the feeling of ownership/companionship with your discoveries. And though a small thing, when trying to collect the creatures to take home, them avoiding your mouse made that feel a bit more engaging than it would have otherwise.
-Not having any kind of indicator that a combination 'failed' made it just feel broken. Though I'd read in your comments below/page that it should be working, so attempted it many times as I expected I'd finally find a 'valid combination', and did. But it really needed a clear indicator for it failing or succeeding.
Understandable with a game jam time frame, but it would have felt better visually for you to have just hidden the shop instead of labeling it not available, as that could otherwise mean you just needed to unlock it. Though you mentioned in your game description that wasn't the case which helps a bit.

Submitted
Questing there and back
LikeReply
Seth TalDeveloper310 days ago(+1)

I agree with your feedback here. Not having a clear and visible indication that a combination failed, or a list of which combinations worked was an oversite on my part. Originally I planned on the Dex menu be a visual tree graph of combinations and outcomes, I did not plan on adding an animation when a combination was found though. I think if I would scrapped certain aspects sooner rather than later I could have made the end experience a little more fulfilling. Thank you for your well thought out impressions.

fun game! I hope to see more combinations and maps in the future!

This game is so good and have so much potential!

Few thing I would add are some instructions in the beginning of the game and in indicator that shows if I can combine 2 animals together (and that the outcome is). ☺

Hey, glad you liked it. I agree with the feedback here, and its something I wanted to do. I just couldn't prioritize the rights things for this jam. Next time one of my main goals is to improve user experience in my games.

Really cute little game, love the art and music fits in well too. I couldn't find all of the creatures but what i played was really enjoyable. Couple things i wish there was, was some kinda feedback when i combined something and when i didn't, and maybe a slightly bigger bag since i had to keep going back and forth to get more creatures, but that's all the complaints i had. I'm guessing if you had enough time to implement the shop you would've done something like that.  Either way, good job! :)

Heh definitely not a celebrity, but thank you anyways! :D

Hey there! Just played through as much as I could of the game. I didn't see anything on the main page, but it sounds like the game portion isn't completely implemented yet. Was there a special way to play that I wasn't getting?

Hi, I really appreciate the video of your impressions of the game. It was actually pretty insightful to some glaring oversights in my UI / UX design. You are correct, most of the game I had in mind is not entirely implemented as you saw the item shop was not in a totally working state as of yet. The only playable gameplay besides adding creatures to your neat little collection is combining them together to discover new creatures. When you leave an area and travel back to the main screen you will notice the creatures that were in your bag will become automatically populated into the scene. When developing I intended for this to act as a visual inventory of sorts. You can click and drag the creatures from bellow the item shop into the slots within the combine menu. From there I intended for the player to experiment and try and combine creatures in different ways. When a possible combination is found the new creature will automatically join the group in the fenced area made of bushes. Each area the player can travel to has a random loot table system of sorts for spawning different creatures. The rarest spawn is a tabby cat I created who takes after my own childhood tabby cat. You will need him in order to complete the dex of creatures. I know this reply is probably way longer than it needed to be. Just wanted to collect all of the unexplained elements of the game so I can update the webpage tomorrow. Also I have already updated the page to credit my source for the music track as it is not my own creation, in my rush to publish I did not have it written down and thus forgot to credit the author. Terrible mistake on my part. Once again thank you for taking the time to look at my game.

Very peaceful game! I can see how this could become a great game if fully implemented. Hopefully some day!

Interesting collecting-crafing system. Check out my back and there interpretation :D