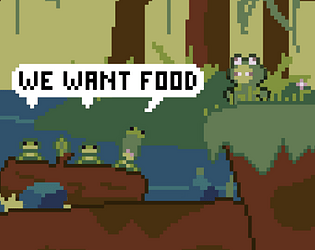 How does your game utilize the limitation and theme?
The player must collect 3 flies to complete the level. The main gameplay loop involves a button that switches certain blocks on and off, requiring the player to travel to the end of the level and back again, but it will be different on the way back.

Incredibly charming start screen, with an enjoyable, really well executed platformer following it, even if there wasn't anything that gave it much of its own identity.

-My favorite part was the presentation/aesthetic/sound design, it really felt complete. And I liked when I saw a fly early, knowing that I'd be back to get it later after swapping the platforms.
And not being great at platformers, and especially for an entry in a game jam, I really appreciated that death wasn't so punishing/you simply had a death counter at the end. So you could challenge yourself to back to the start of the level, but if you died on the way it was okay and you could just go and enjoy the next level because you kept the flies you'd gotten.

-I feel like the last level was really anticlimactic, level progression/structure wise, compared to the second last level. I think they could have been swapped at least. Though not a bad level on its own, it felt too calm for the final level.
The horizontal movement panels had a pretty awkward stopping of momentum when you exited them, like your character put breaks on in mid-air, that could make exiting/leaving those feel weird/less satisfying.

-I can see people appreciating a 'challenging' mode, where you don't keep flies on death, as something to quickly add post-jam.

Submitted
Questing there and back
LikeReply
JhunterDeveloper355 days ago(+1)

thank you for all the feedback! I’m glad you enjoyed it

These Sound effects :D Really great. Also the art and Animations were really good! Controls were on point. Nothing to add.

Very nice sound effects :D Also liked the graphics :)
What I see as a problem, is that you start from the beginig when you fall, even when you have collected all the flyes. That makes returning to the door very easy :D I suggest, you add lives instead of keeaping flyes and when you fall, you just telleport back to the last platform. And also I think it would be cool, if you automatically collected flyes when you touch them.

Really nice art and funny sound effects! :D And i'm really happy that you didn't clear the flies you already collected when i die, cause i died a lot.. Overall really nice game, good job!

SOO cute! I loved the art, animations, and sound effects. it was really fun to play. Overall, great work!

perfect submition , I loved it!

The sounds made this game way to fun lmao

I appreciate it lol

This game is hilarious. I'm not sure if that's what your going for but you nailed funny. The sound effects absolutely made my day. I think the walk sound get a little annoying but the others are perfect. I also really liked the color pallet. Well done.

I love it! Great art, the most chuckle-some of sound effects, pretty good music, and the general tone is just hilarious. Level design is also pretty good!

I actually really liked this game. I thought that the new mechanics being introduced at each level kept me wanting to play, as it added new challenges and obstacles. I will say it was a little weird that for the very first level I had to go all the way right to toggle to get all the other flies. I guess that's how you got the there and back theme in there, which actually did make sense from a puzzle platformer standpoint.  However, I  still thought this was a really fun game, and I absolutely loved the Audio, especially the sound effects!!!

it was a good game but I did not really want to play more after the first level.

Neat game! I liked the tight controls when platforming.  Would you mind playing my game aswell? Thanks

Submitted
Save Them 2.5d
LikeReply