What if snake was in 3D? Created for the Nokia 3310 Game Jam!
Submitted by Prio — 1 day, 11 hours before the deadline
Add to collection 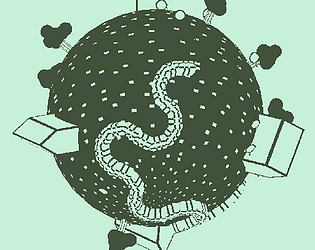 Ranked from 49 ratings. Score is adjusted from raw score by the median number of ratings per game in the jam.

It is a very a good game, it is instinctive to play and 3d effect it is very impressive ! I think if it could be downloaded I would play on my mobile because it is very funny ! Although there is not a clear link with theme of death, it is a great nokia game !

Hi :) why i haven't respected the restrictions for your POV?
Also, the theme is a little hidden, but it's pretty simple:

So, the theme is nearly hidden in the simple concept of the game, but exist :)

This is a great submission, I just figured I'd nitpick a bit since most of the other comments are overwhelmingly positive.

The connection to the theme is a stretch, but the game itself is pretty good. One of the only 3D games of the jam where I can actually tell what's going on at such a small resolution. The dithering effect used to imply half-tones worked well and definitely succeeded in faking depth where many other games did not. The fact that you managed to make anything 3D playable without breaking the resolution or binary color palette is pretty impressive.

The music became very grating very fast since it uses a lot of the higher register of the already incredibly high pitched nokia sound chip. I would've much preferred silence with the occasional sound effect when picking up a dot.

The difficulty curve is pretty rough in this game. Being able to continue in a mostly straight line without ever meeting your tail makes the game ridiculously easy at the start. The tail only really comes into play around 40 or so, and once it is finally long enough to start blocking you the difficulty picks up very quickly. The obstacles are the only thing providing any challenge whatsoever up to this point, but once the player has to start worrying about the tail it becomes a bit too much to handle both at once and the difficulty goes up exponentially from there. The houses and trees are very tall and easy to spot from a distance, but the tail is very short and is barely visible until you're almost about to ram into it.

Pretty solid game! I think the trees and the buildings were a bit too much, since the snake's body is enough of an obstacle itself, but it does make the world more appealing to look at. Absolutely loved the music as well!

this game is awesome

nice! had a lot of fun with it

I really like this one, love the sounds that you chose and the 3d style. Nice game ^^

Aww a cute game reminded me of my old keypad phone I used to play snake a lot.

This is a fun game, I have been playing for a while only for the enjoyment of see my own tail grow more and more.

I didn't see the connection with the theme until I saw your explanation in another post, nice point :).

I really enjoyed this one!

It's just well done. I don't know what else to say about it. It's just great! :D

the games quite enjoyable and sounds quite good though in my opinion the game does feel like you just got a higher res 3d game and put a Nokia 3310 filter ontop, not that the games bad not at all its just doesnt feel even somewhat plausible for the 3310 to run.

if you made it a bit more like Sonic 3's bonus stages i think it would have felt much more at home on the system.

Yeah i know,  but honestly performance of the phone were not a rule so i just followed what my immagination told me to do

Addicting, enjoyable and soundwise accurate game. Also an inspiring game, really. I assume that this game uses actual 3D graphics, but you managed to make it look like something that could be achieved with real 3310 or hardware with similar limits (with some programming magic/optimizing of course).
It's just giving new ideas!

Awesome little 3D snake remake. Although I don't see how the theme is implemented. One thing I disliked was how it would start me without any prompt or input. Try making it so the snake only begins to move once the player presses space or something. Well done!