Shooter Game Without Shooting - A Rhythm Bullet-Hell Shooter game by LuiCat
Submitted by LuiCat — 12 days, 13 hours before the deadline
Add to collection 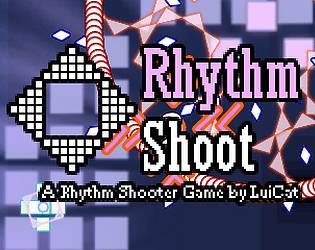 Please list any pre-made art/music/other assets you used.
No pre-made art or music pieces are used for this project since all resources are original and created during the jam.

Anything you want to say to players before they play?
This is bullet-hell shooter game but you cannot shoot.
You hit on beats instead.

Hit on the beats several times to beat the enemies;
bullets around the defeated enemy will be removed.

There is a one-time shield protects you from death.
Defeat an enemy to restore your shield.

Your target is to survive through the whole stage.

Good luck with dodging the bullets and hitting the beats, and hope you like the background music and bullet pattern/puzzle designs.

Congratulations, I thought your game would place higher tho, but it still made it to top 20! Well done.

Thanks! I've learnt from this one of my very-first-attended gamejam that preferences of the masses would affect the score, but score doesn't really matter in jams as feedbacks are always the precious ones here.

This was really nicely done, the bullet patterns were pitched at just the right level of difficulty, and I love the main gameplay idea. My only worry was that sometimes when it got quite hectic, I felt like I was just pounding the key at random instead of on the beat, and it still seemed to be dispatching the enemies pretty effectively. I also wish there had been at least one more level to try out.

Regardless, definitely one of my favourite games of the jam!

Currently I'm thinking that if this could be a complete game with more stages and mechanisms, a free-play mode would compensate for this; also, I'm thinking about adjusting the beat mechanism so that somehow sone could always feel that he/she is tapping on beat (in real it would be off-beat, with different tempo or whatever).

Great music, nicely executed danmaku mechanics, design is tight. Gotta say that it felt a little visually overwhelming at the end though, and the destroying of bullets made the game feel less of a bullet dodging spree. Overall, very well done!

Submitted
The Dance Floor is Lava
LikeReply
LuiCatDeveloper3 years ago

That was pretty neat.  I liked the design overall.  I don't think it was too hard or easy.  Although, I only got hit one time when I won.  Just concept, nice music.  The enemies dying sounded out of sync in spots but overall, really cool!

Thank you! I watched your video. Nicely done and congrats!

Although I tried to merge the concepts from rhythm games and puzzle-based bullet-hell games, still I'm doing too bad on fine-tuning the mechanism and making better sound/graphic design, so thanks a lot for your precious live-play feedback. I would like to see if I can push this concept to some better implementations.

I'm not sure if it was made easier... I lost my shield multiple times but never died, either way I liked the game and I like the concept of killing enemies with good beat and getting rid of bullets that way

Thanks for your comment! The shield gives a much lower requirement to pass the game compared with the same game without a shield but has limited lifes. Also, losing the shield may encourage the player to restore it quickly, which is expected to be how casual players do the game. I don't know if I'm on the right way, but with more feedbacks I can get into this genre much more better, and hopefully recreating a better one.

Yay finally a bullet hell done right. I love bullet hell but I rarely see a good implementation of it. May I ask you a bit about the technical side? How did you handle that many bullets on the screen, is there any trick to it? Also how did you design the bullet pattern? Like rotating the spawner and spawns bullet every x milliseconds? Regarding the game, it is so beautifully done in all aspect. Challenging but not impossible to beat, and the shield is really nice touch in term of game design. I love that I can only shoot within a range so I have to move closer to the targets to fire, creating a lot more depth to the game. Hitting the beat also feels very natural, but because of the busy graphics, sometimes I don't really know if I have missed a beat or not because I mostly had time to look at the bottom bar in the beginning and not during the stage. This is not important if I were to do well, but if I were not, or if the tempo changes, I wouldn't have notice. All in all, an awesome heavily rhythm based entry. I wish there were more tracks to play.

The bullet hell things really depends on the game engine. The engine used for this game is custom-made and lightweight, so it won't do a lot of other transform logics creating unnecessary overheads. Actually you can do this with glfw or other similar graphics libraries.

The bullet logic is calculated in some way that the engine don't have to frequently update the bullet states. Every bullet has bullet state consists of position, velocity(in axial speeds or rotation+speed) and acceleration values (angular velocity+linear acceleration), and the position and velocity values are both updated every frame.

As for spawners, there are no actual spawners, but all bullets have an option of being spawned from any of the enemies. As I use Lua for the game script, every "spawner" is actually one cycle of a for loop, with a series of tasks and bullets assigned to a spawned enemy.

The tempo change was designed as part of the introduction, as I thought it's easier to start slower and gradually gains speed; from your feedback I feel this actually bad for new players. If there are more stages, I would definately give a constant tempo for all early stages.

This reminds me of my game but just the total opposite.

This is a totally conventional shooter design, and I think maybe some innovation design would be better but meh, I was used to design those bullet patterns in this conventional way.

It's a nice game, it's just too difficult...

Welp, the difficulty ruined the fun of playing this game. However I can make this any easier, as there is possibility that one passes the game by only tapping the rhythm without moving (you can try it yourself as well).

Here's the BGM on SoundCloud. Put on your headphones and enjoy!

This game looks pretty nice. What framework/engine did you use to build it? Love2D?

I made this with a custom-made engine, which is basically a wrapper of DirectX 9 with basic support of rhythm mechanics and Lua scripting.

This game is so good it deserves to be the winner in more than just one game jam!

Thanks and let's see what's the result 😏

Rhythm Shoot is a psychedelic space shooter with lots of gorgeous visuals to shoot and lots of rhythm.  Rhythm Shoot is like Galaga on shrooms at an EDM festival.

Updated: I uploaded a video of current version of the game with slightly changed background music. Hope you enjoy it.

For quick expression, here is a record of older versions of the game. The level design in the video almost the same as the latest version, but the background music is slightly modified in the latest version. Hope you like it!