Too many lanesView game page 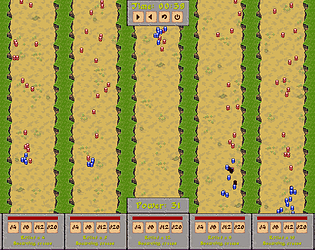 Too many lanes's itch.io page

Wildcards Used
Good things come to those who wait, Dare to fail, Roll a d20

Game Description
Familiar with MOBAs? This time you are in charge of spawning the creeps and you have to make sure no enemy creeps reaches the end of the lane. Things are complicated by there being a few to many lanes and dice being your only tool.

Really, really fun game! I love this kind of thing, and this was great!
I wish there was a bigger indicator to tell how many dudes I had spawning, so I didn't have to read the tiny numbers. Also, having more options for upgrades and stuff to spend my money on would be great!
But overall, awesome work! A lot of fun!

The game is great except for the player actions.  Maybe instead of spending power on dice to generate minions, spending it on upgrades for the lanes that roll dice would be more interesting.  As it is I enjoyed watching the minions fight each other.

Submitted
The Seven Trials of Chronos
LikeReply
EroAxeSubmitted1 year ago

Well the concept behind this game had me very interested and the control scheme relying on RNG seemed like it could make the experience interesting rather than boringly just placing/spawning units etc..  Though in my experience unfortunately I ended up running into a lot of issues that detracted from the experience while I was playing.  I was really looking forward to an interesting strategy game though.

To be more specific:

That's about it I believe.. I tried to be semi concise but uh... that didn't work.  I also tried to give some suggestions on how to fix each thing, hopefully that did work.

This was super fun trying to figure out the best strategy. Stressful sometimes, but in a good way. In terms of accessibility, please add audio settings so you can change volume of sfx and music independently. Thankfully the default volume was balanced ok. I still don't know when it makes sense to use the other dice though lol.

This was super fun trying to figure out the best strategy. Stressful sometimes, but in a good way. In terms of accessibility, please add audio settings so you can change volume of sfx and music independently. Thankfully the default volume was balanced ok. I still don't know when it makes sense to use the other dice though lol.

I like the idea of optimally planning out resources and have to decide to give up on some lanes at certain time. It would be good to adhere to the theme 'seven' more instead of wildcards.

Cool concept but it is a bit defficult

i don't know but it bit hard for me, but good game

Cool concept! Love the sprites and the music. The UI is a bit of an eye chart - perhaps playing obviously different sounds scaled to the number rolled would help so we don't have to read the small font at the bottom while we're trying to focus on the enemies?

got 4:28 on hard. very fun. It has a little bit of strategizing with witch dice to roll, 1d4 has better energy conversion but you don't have bonus to energy production. very fun and polished. you could add more troops and enemies.

Submitted
They are lost, You must help them.
LikeReply
CroSnakeSubmitted1 year ago

Hi EClaesson, The game was fun. When ya get snowballing, ya really get snowballing, like a real MOBA. I liked different amounts of chance I could choose to spend spawning creeps. Its real raw chance, as I had quite a few low numbers on a d20, but you know what they say: chance is clumpy. I liked it, good job.