Protect the tiny planet's inhabitants... from themselves!
Submitted by PugByte — 35 minutes, 30 seconds before the deadline
Add to collection 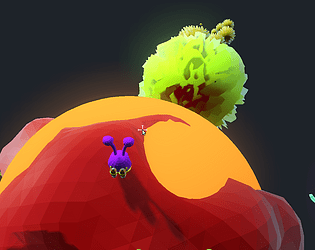 Game Description
Protect the tiny planet's inhabitants... from themselves!

Cool stuff, grats on the theme, the 3D and finding the time to do an intro.

The intro would have looked really nice with some space shader to fill the background. If you could skip the intro step by step it would be better for hyperactive people like me.

It took me some time to figure out what was the point of jumping on those weird nova things (to recharge the shields). Spawning a text +1 shield at the place where the nova is would greatly enhance that!

Was there a “minion” death effect as well? I had a hard time telling when it happened.

I could not figure out what expand shield (RMB) was supposed to do? Or how to use it?

I think the difficulty could ramp up a bit faster, and maybe divide the gameplay in levels increasing in difficulty (spawn rate of the missiles, more/less population, …)

Also good that you worked on the sound design!

This is excellent!  the game was fun, unpredictable and exciting. And the graphics is top-notch. very well done!

Neat game and loved the intro! I had a tough time winning and figuring out how to expand my shield after placing it, but it was satisfying when I was able to get the shield up to protect some of the poor cubes at the last minute.

sound and graphics were pretty good though I did get a bit of graphical/audio stutter during the intro (my PC is pretty beefy so not sure what caused it).

Submitted
A Party for Ants
LikeReply
eplisSubmitted2 years ago

I laughed while playing this and that's a good thing.  The intro is great too.  It's an nice original "shooter" where you don't really "shoot", great idea!

Really solid entry! The intro was great and the graphics were very fitting and cohesive. Game play wise, the only thing I wished for was some type of target on the ground, to better inform where the green projectiles were going to land. However that may of made things too easy? All in all, fun game. I enjoyed it. Excellent work!

Thank you! I totally agree a target on the ground would have been awesome. I actually tried multiple ways but couldn't get anything to work well. The most promising approach was using "decals". Basically, projecting an texture on the planet. There are two decal addons in the AssetLib, but I had issues with both of them :'( I saw that Godot 4.0 will have decals built in!

Great game, I really love all the effects and particles well done.

Sadly the lava defeated me once again :p

That darn lava! Really should have made it more forgiving. Thanks for playing and glad you enjoyed it!

Fun game! I enjoyed the intro and loved the little voices. Somehow their movement and voices gave them a kind of cute personality (it didn't matter that they were boxes!)

Submitted
Land of the Leprechauns
LikeReply
PugByteDeveloper2 years ago

Thanks so much for playing and glad you enjoyed the little voices! During development I got tired of hearing my own audio clips after a while haha...

Very impressive! I enjoyed the overall experience though I have to echo some of the comments on how frustrating it is when the world is nearly gone. However, the frustration is at the game but rather how bad I am at it. Hope to see more when you have time to work on it.

Submitted
WayFinder: The Board Game (MVP)
LikeReply
PugByteDeveloper2 years ago

Thanks for playing! Sorry about the lava, it's quite unforgiving isn't it? Even a toe nail touching it kills you haha... Maybe if lava wasn't an instant kill, but rather it damaged you it would be less frustrating. Plus, this way I could add fire particles! More particles is always good right? Lol.

I liked that quite a bit. Even just the intro story is super cool! And that's such a great usage of destructible terrain. It did get pretty annoying towards the end when most of the planet was lava and I couldn't navigate anywhere anymore though. Additionally, the controls took a bit of getting used to. They were fine after a while, but still a bit awk.

I accidentally pushed so many little cube guys into the lava hahaha.

Loved the idea of 3d implementation of the planety mechanics. But there are 2 type of models - low poly and high poly. I think that it would be great if they all are low or all are high poly.

Thank you so much for playing! I think you are right, it could use a little more consistency across all the assets. I was time pressured, but honestly I'm not that great of an artist period so even with more time it may not have been better haha.

I loved the graphics and the effects! I also loved that it had a little story that went along with it. I had a bit of a hard time understanding what hurt me and what to avoid. But awesome submission.

I'm so glad you enjoyed it! One big area I personally want to improve on is the UI and HUD design. On screen indicators for what is happening would have been so nice.

Loved the graphics and sfx, took me some time to understand the game but I enjoyed it after. Nice job!

Thanks for giving it play! All the box people voice clips are me, haha. I definitely need a better UI and explanation of the mechanics.

I like the concept of the game. At first, I always wonder why I always ran out of shield then I figured out I need to get  those spiraling purple sphere to replenish the shield..lol.The main character looks cute and funny. The graphics and sfx are amazing too. Great work buddy.

Spheres and cubes, the ultimate placeholder graphics, haha! I really wanted to make a 3D shield model for the pickups, but I barely had enough time to finish what I did. Thank you so much for playing!

The intro cinematic had me chuckling the whole time. I loved it, especially the main character model and the goopy planet wiggles on impact. I kept yelling "Stop killing each other, you morons!" and once narrowly saved a little cube buddy only for a projectile to immediately shoot out of his location. What a jerk, haha. I couldn't figure out how to get the right click mechanic to do anything. How does that work? Best run I had was a little less than 3 minutes.

I'm so glad it made it you chuckle! The planet impact ripples was the first shader I've written for a game!

Depth perception of the missiles is really hard, so expanding the shields early allows you to be less accurate.

I did a really bad job with the UI / HUD. I was so confused by the UI layout system. Need to find some tutorials on that! I added the right click mechanic in like the last 24 hours and throw some text in the top right haha...

Ohhh, the right click makes so much sense now.

It's a pretty quirky game. The graphics were nice and the concept is cool! Though it's unfortunate that my laptop can't seem to handle 3d games well. Anyhow it's still a nice game.

Thanks for playing! Maybe I added too many particles?! Haha... No, really I coded a bunch of things in a quick but computationally expensive way, like the planet destruction.

nah the particles were just the right amount imo 👌

I had a hard time skipping through intro part, but overall I was impressed with the game.

Ut oh, I just tested and pressing Enter somehow loads the intro a second time... Pressing space or escape seems to work on my machine. I have no idea why Enter is doing that haha...