Stop revolving and explore the universe.
Submitted by Nisovin (@nisovin) — 5 hours, 45 minutes before the deadline
Add to collection 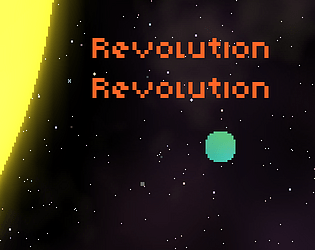 Game Description
Explore the universe as a moon tired of revolving.

Really enjoyed exploring, the graphics / characters, and the revolution+revolution theme.

I would have appreciated just a tad more explanation / goals / structure, as I felt a little lost. Perhaps more playthroughs would have helped the mechanics sink in further.

How come a talking planet can be so cute? How did you come up with this idea? Love it!

Really good, fits the theme while being original, nice visuals and sounds, and a simple but engaging narrative with charming dialogues. The controls are good but sometimes it's a little anoying to collect the moon food.

Wish I could also annoy planets by bumping into them, you already have the physical interaction and sound effect, and they are quite good too.

I've seen a couple games about planets and so far none of them talked which I thought was really nice. I also really liked how you made a game specifically about not revolving, but it still fits the theme. The gameplay was really creative and pretty well suited for a procedural world, but it got a little confusing at times, specfically when the suns first started attacking me or when some arrows seemed to lead to nothing. Overall I really enjoyed it though

The dialogue was really well written, you gave a lot a personality to moons, planets, and asteroids! For all procedurally generated art, the background looks pretty good and the scrolling textures on planets gives a good illusion of rotation. It's also really cool that you procedurally generated the entire world, it feels like there's a lot to explore and the calming music gives a good mood.

One thing I was slightly confused about at first was that I couldn't recruit more than 15 followers, I thought it was going to be a katamari damacy style game where I recruit a bigger and bigger army to take over the galaxy.

Would love to have more objects to talk to and interact with, there was so much charm!

This by far the best game out of all the ones that I've tried. Throw in more content and release it as soon as you can!

I really like your take on the theme! A revolution revolution, brilliant :-)

Very cute! Theme is great, really fun to explore with your followers heh

I like the way the theme was implemented and how luna grows on you and develops a character.

Submitted
One revolution after the other
LikeReply
BoboSubmitted1 year ago(+1)

Good vibes. I'm a fan of the "no art assets" thing, and great job making it a little challenging instead of just a zen floaty experience.