Thank you for the detailed feedback! Curious if there are any specific games from other game jams that you recommend highly; I'd love to check out other game jam winning entries and learn from them too!

Oh no, thanks for the heads up! I've tried updating the executable permissions on the macOS version. Could you try re-downloading it and see if that worked?

If that still doesn't work, could you tell us what version of macOS you're on and attach a screenshot of the exact error you're getting?

Are you talking about the jump at the very end? If so, you'll need to raise the door to help you get to the end.

Congrats and thank you!

I've been busy with another project that recently concluded and just started working on Edna again :)

Here's some art I've recently drawn for the game: 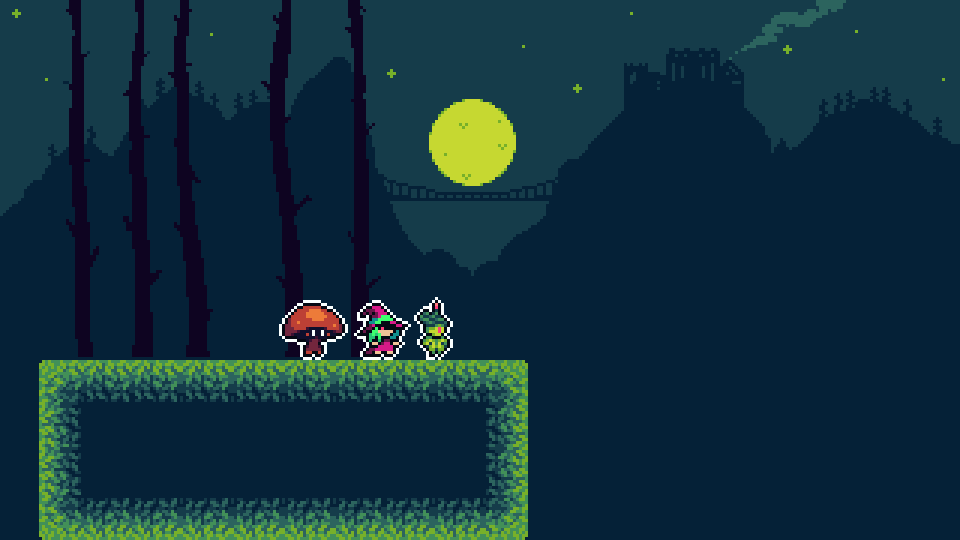 Hi there, feel free to publish a mod that extends the Pyromancer mod. I'd prefer if you credited this mod if the expansion uses the same name and/or images, but otherwise go wild!

I don't have any plans for additional episodes but did have ideas for a couple other original characters I wanted to try to make. Maybe those will happen eventually!

Wow I saw there's now a page on speedrun.com! The strat on level 3 is very cool :D

Hi jameskay, are you still able to play through the game fine? If you can't see anything outside of the puzzle area, then you will be only missing the puzzle titles and not much else.

Thank you, glad you enjoyed it! How many times did you enter Limbo on your winning run?

Yep, Magma should primarily be for dealing self-inflicted damage back. I believe it should also work correctly with poison so it can kind of act as a soft counter to enemies that poison you.

Oh no, thanks for the bug report. I haven't been actively working on this very much but I'll try to get that fixed when I next put out some changes.

The first level has a small easter egg if you collect all the sushi :)

It's pretty difficult but I hope that helps!

Good luck and hope that helps!

You need to do a "double jump" where the statue jumps and pushes Edna up, then you quickly switch back to Edna and do a second jump.

Awesome! The current version has a lot of the post-jam fixes and improvements which was done after the initial 48 hours though.

Rewinding time is just a quality of life feature so that if you make a small mistake that makes the level unsolvable you can just rewind to before the mistake instead of having to restart the entire level again.

Yep, it is possible to exit level 9 after getting the sushi. To do so you need to rotate the top, top-right, and right mirror so that you can see the statue even after you've rotate the mirrors towards the sushi.

Yes, you should be able to see a cat if you go back to level 1 after collecting all the sushi!

Thank you! The implementation of rewind was done after the 48 hour game jam period and if you are interested, here is a good resource as to how it was done in Braid:

I agree that the puzzle design is linear and that the game overall should not be too challenging. The feedback about switches making the game feel like it requires more trial and error is helpful!

I'm personally a big fan of hard puzzle games like Stephen's Sausage Roll, Jelly no Puzzle, Snakebird, etc. but feel that they're not very accessible to most players and that many people end up giving up just a handful of levels in. In an expanded version I would likely keep the same degree linearity and challenge in the required levels and design sushi's that either require more advanced techniques or require more tricky logical reasoning.

Thanks again for letting me know about rewind broken in the Windows download. I've updated the download links and pressing R to rewind should now work.

Thank you for playing and glad to hear you managed to get that sushi!

The base game resolution is 320x180. I don't think this will be a big commercial game but I will probably continue working on an expanded version :)

Oh no, I'll try to fix the rewind!

Pressing the O key to skip a level is intentional (highlight the missing control on the game page description) and I wanted to keep it in there for people who wanted to see the whole game but wanted to skip any particularly frustrating level.

This was really cute!! I loved the caterpillars especially and the voices!

Thanks and yep, that's sort of what's implied in the title!

Thanks, the jump and land dust effects are animated by hand and the screen transitions are done via a shader (see one of my comments below for more details).

Thank you, I'm thinking about expanding the game more and have some ideas! Here's one of them:

Yep, the screen transition is a shader. I put it on a separate CanvasLayer and have two ColorRects with the shader material, one for fading in and for fading out. The next scene is loaded asynchronously and the fade in is played once the scene is done loading.

Regarding source code, I'm not sure yet. That said, if you have any questions about how specific parts of the game were implemented, I'd be happy to answer them!

Good to hear! I will be uploading a post jam version some time after ratings are announced that should address this issue :)

Hi Uchip2, one known issue with the game jam version is that the player doesn't advance automatically to the next level. Can you check on the main map to see if you've unlocked level 2 after you finish the first level?

Hi Klettari, one known issue with the game jam version is that the player doesn't advance automatically to the next level. Can you check on the main map to see if you've unlocked level 2 after you finish the first level?

This was so good! Loved how the music transitioned and how fast the gun starts shooting. My friend and I raced to see who could get 120 second first and I managed to win but he got 134 seconds afterwards.

Are there more enemies after the ones that shoot 3 bullets at once?

Nice, this was fun! I managed to finish in 5:08. Is the intention to have the player figure out their own preferred playstyle? I ended up mostly throwing out my knife and then slowly retracting it since I could retract, wait for the enemy's iframes to finish then retract again to hit it a second time.

Thank you for playing our game! It was extremely valuable to be able to see a live stream of someone play through it and definitely revealed some flaws in the level design (the most prominent issues being levels 2 and 7). I'm working on some post-jam updates now and will definitely rework those two levels a bit to signpost new ideas better, fix issues where the camera has the potential to obscure some stuff, and definitely change the 1-tile wide platforms in level 7 to be 2 tiles wide so they're easier to guide the statues up.

Thanks so much for playing through the entire game and making a youtube video about it! I enjoyed watching you play through and it was cool to see you get the double jump and finish the hall of mirrors!

I totally agree with having a shortcut to return to the witch and will definitely implement that if we try to turn this into a full game. Thank you for the comments about the sfx being a bit too loud; it became a lot more noticeable to me once you pointed it out. I think audio is probably our weakest area and we'll definitely put more work in improving it!

Thanks! And haha, I actually wrote some code to try and help push you out of doors so you don't get stuck but it doesn't work 100% of the time :p

Really great puzzle game with a good variety of mechanics and good polish and detail! I especially liked how the different characters had interactions with each other and you managed to put in a lot of levels! The graphics were also simple and made the puzzles very readable. The only suggestion I have there would be to make the skeletons a lighter shade (or even just white) so that it's easier to distinguish them from orcs.

Some of the levels were a bit less "tight" than they could have been, presumably because there wasn't that much time during the jam to check all the levels. Here's a couple levels with solutions that use fewer characters than given: 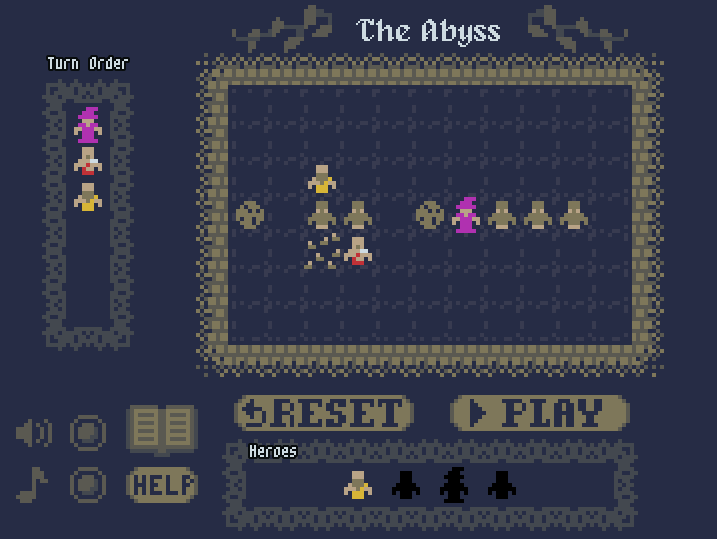 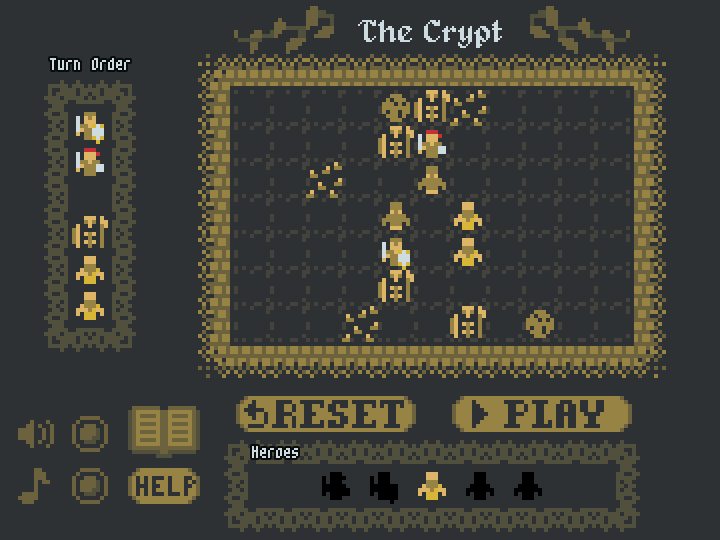 One other minor thing that was probably just me: I thought the paladin was invincible and tried pushing them onto some spikes and was a bit surprised when they died as a result.

Nice, the core mechanic is pretty similar to 2048 but works well! The music and graphics fit nicely together and make the game feel pretty relaxing.

Mechanics-wise I thought it was neat that you can actually shuffle single buildings around by just dragging them into an open space which is different from 2048. And the way you select things made me think initially there would be a bit of match 3 style thing where I could make longer chains for bonuses. I think that might be an interesting direction to explore.

One more interesting direction I could see this going is to explore ideas of overpopulation or underpopulation. For example, maybe if a building is surrounded on all 4 sides, a timer starts ticking down and makes the building shrink one stage because of overpopulation making people want to move out. I think it would be really neat if the optimal gameplay then ended requiring you to make small clusters around the map so that there end up being different "neighborhoods" to your city.