The Ballad of BanjoView game page

A metroidvania where the game focuses around a few mechanic
Submitted by Knight Shift Games (@knightshiftteam), Arks (@scissormarks) — 1 minute, 22 seconds before the deadline
Add to collection 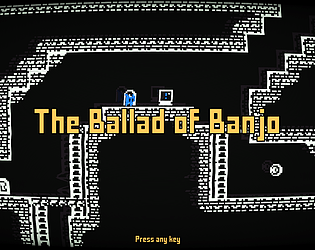 The Ballad of Banjo's itch.io page

How does your submission match the theme?
Dashing through enemies allows you to reset your jumps. The longer you stay in the air, the more damage you deal.
The idea is you have to balance your cooldowns and height to continuous jump and dash to maximize your air time.

Health is another dual purpose mechanic, It's both your health and you can sacrifice it to create checkpoints at the risk of having too little health.

Lovely game. I included it in my Game Maker Toolkit’s Game Jam compilation video series, if you’d like to take a look. :)

Cool use of dual purpose design, both mechanically and in rules! I beat the game but not sure how. The bird boss looked like it kept getting hurt by the white egg looking things that would feel. All I kept doing in this area was getting the feel for reaching higher and higher with the dash mechanic until the boss died. I liked the aesthetic(both visual and music) and would like to see more! I'm a sucker for Metroidvanias!

This is a really cool concept and a very polished game for a 48 hour jam. Everything from the aesthetic to the music are on point. Couple notes I had: I didn't realize that dashing into enemies resets your jumps. I felt like I tried this a couple times to see if it was the case and it didn't work, so there might be something around the input there. You might consider giving the playing a little more leeway on their collision for jumps. There were a couple times I swear I pressed jump in time only to run off an edge and get hurt by something. Also, as noted by someone else, some hazards hit you automatically when you transition screens. This actually killed me once, which is a pretty frustrating way to die when you've never seen the next screen.

All told, though, this is an excellent submission!

http://store.steampowered.com/app/286100/You_Have_to_Win_the_Game/
Have you played this before?

I have not! This looks fantastic, I'm gonna give a try this weekend

WOW THAT WAS ACES. Great music, really cool shader effects, and the Downwell aesthetic and sprite art was top-notch! Love the monsters, the music.

Still, some feedback: When transitioning into other screen you often step into enemies/spikes which feels a bit unfair. Its not clearly communicated what power you obtain (maybe that's intended?). Dash jump controls feel a bit finicky and could need some refining - a similar dash jump game would be Celeste where its communicated that an additional jump is allowed through a change of color. Its not communicated clearly that pressing jump while on a ledge can allow you to drop below a ledge as well. Not sure what was happening at the boss battle too as it seems like he died to some balls falling from the sky? But overall a very impressive entry and my favorite so far!

Yeah, perfectly understandable about the rooms, they were rushed and it only became apparently that some rooms were unfair since enemies were always active as you played through the level, a planned update is to rework room logic a bit so everything is inactive as long as you aren't in the room and for rooms to sort of reset when you enter them.

I'll give Celeste a look, I never heard of it before

Amazing work!  The art and the game feel was so good!  I noticed some slight bugs.  The boss couldn't hurt me and  I couldn't hurt the boss.  Some of the enemy hit boxes are a little finicky and it's sorta hard to tell who hurts who in those situations.  Pretty good overall though.

This game is surprisingly big for the time that was given to make it! Rather expansive, makes me wanna explore the whole thing... The mechanics need to be explained a lot better, though; I found myself lost and having to figure things out on my own or check the jam page. Other than that, a nice entry! It looks so good!

This one took me by suprise. Middle of the night without my sound on I almost lost it when my controller vibrated on my desk. Instantly excite to have a game with controller capabilities. Great style, awesome looking characters, easy enough to start playing right away but challenging enough to make me want more! Way to go

My thoughts on the game in no particular order:

Very well made. I did not expect a metroid-vania in this competition given the time constraints, but you pulled it off very well. The controls were responsive. The mechanics were easy to understand. The level design made the most of the mechanics, intuitively making me attempt to use my new abilities when I didn't even know what they were.

Damage mechanics were confusing though. Sometimes I took damage while dashing into enemies. I don't know if my timing was off or what was going on. I just couldn't figure it out. I mostly avoided enemies after the first 2 deaths. Also, some fires seemed to hurt me while others didn't. All in all, the health mechanics are the only part of the game I just didn't get. Having to spend money on health to stay alive while also needing to conserve it to get though the door on the start screen was an interesting mechanic. This was a better mechanic before my first death, when I thought dying would entirely reset the game. While it would have been annoying if this was the case, the entire health system is undermined by the re-spawn system, making death nearly meaningless since I can get back to were I died with little effort most of the time. Not that I think it should have been a rouge-like, but these mechanics encourage death since it refills health, like in some shooters were suicide is an easy way to get more ammo.

I appreciate that this game is controller comparable. The graphics and art style are unique (though reminiscent of Pony Island). All in all, it was a very interesting experience and very well executed.

Sadly, I accidentally pulled off a boundary break by jumping over the left wall on the top screen, and fell into the boss fight. I am not sure how much of the game I skipped as I have not yet replayed it to explore those areas.

Really appreciate the feedback! The plan for the game was to make the map a bit larger so that you would have to use the checkpoint system a bit more and force players to decide on wasting their max health pool for less of a death penatly but ultimately the time constraint killed me a bit. Also I was more concerned with making the game easy enough rather than ungodly difficult for the sake of the mechanic.

I loved that you found a sequence breaking bug in the game, when I read it I got a big smile thinking back at seeing the speedruns at gdq.

In my comment, I somehow forgot about the time constraint. You made a fairly massive level give the 48 hour limit. Also, you are of course right that this health/checkpoint system would work very well with a larger map. I am glad you focused on a reasonable difficulty. I only realized my game was too tough the day after submitting it. I look forward to a post-jam, expanded version of this game if you choose to continue development. Best of luck!

I really liked the graphics of the game, but I could not find out what the controls were. In the menu, it says "press any key", but only the enter key worked. I liked the idea of creating a checkpoint at the cost of health.

Sorry about that! Was an oversight since I made the menu at the start of the jam, I'll push an update to fix that later today