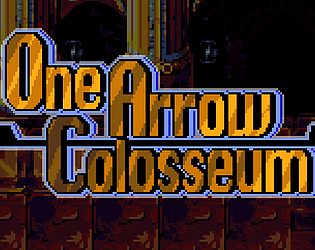 Now im sad, becasue we basiclly made the same game but yours is os much vetter, very well done

We worked as a Team of 5 so I'm guessing we also had a bit more hands to craft this.
You still made a playable game in 48h, that alone is impressive! :)

Cool art and game!
What could be cool would be to have the arrow bounce if it touches an enemy otherwise it becomes very repetitive in a long run. There is a lot of cool powerups or other game mechanics you could add to add more diversity. It's a nice game!

Submitted
The only NeOne
LikeReply
kotobSubmitted1 year ago(+2)

There are a lot of nice things I liked about this game.

I liked the art which reminded me of Tangledeep (in a good ).

Even though I saw other games with the one-ammo mechanic this one is actually better than most of them because of the space-dash and the perfect monster AI (which is very cute too)!

Hey, we made a godot game too. Check it out!

Submitted
Lurking in the Dark
LikeReply
SimpleTeamSubmitted1 year ago(+2)

When you shoot your arrow ,it is sometimes really difficult to found it .I would be better if there are an indicator for the arrow .

Overall it is a very satisfaying game with well graphics .Good job!

Submitted
IT'S MINE
LikeReply
Kove1 year ago(+1)

It feels really awkward that the cursor is still showing alongside the aiming reticle, and you can see the reticle lagging behind the cursor.

There is a variety of enemies, but they all do the same thing.

Art looks excellent but again it feels awkward to walk over a chasm or whatever the black parts of the floor are supposed to be. Music is good and sound when you hit an enemy packs a punch and feels real,  and I like that.

Overall it is a fun game, nothing genre redefining but it is fun.

SO FUN! i wish the end game had some animation or sound effects!

Fellow Godoter! I loved the smooth controls. As well as the variety of monsters and the seamless transition from one scene to next. The looping music was unobtrusive and kinda relaxing too.

That is some pretty decent pixelart graphics for a gamejam! Plays pretty good as well!

We also played with the idea of having to pick up your arrow after using it.

A fellow Godot user! This game is great, one of the best I've played in this jam. The movement is smooth, the bow handles well, life is well represented, the only thing I could comment on is the arrow once I shot it I wasn't sure what to do at first, then I figured out the arrow could be picked up again. Maybe there should be a text somewhere which explains how that works.

Glad to hear you enjoy playing our game!
Yeah unfortunately time was short on us so we had to cut all the tutorial stuff.

Submitted
One Boss Too Many
LikeReply
Tricky_Fat_CatSubmitted1 year ago(+2)

Nice work, I'm happy to see a game which uses the same concept as mine. To be honest, when I was pondering about my game I thought about a bow, eventually, I decided to use spear.:)

Submitted
One Spear, One Kill
LikeReply
BitronDeveloper1 year ago(+1)

Funny, We had a spear in mind first but eventually went with bow and arrow. :D

Thanks for playing, will have a look at yours!

What the irony of a game jam. =D

Nice job! I can tell you put a lot of work into the art and sound effects. Here's some more constructive feedback:

Design [3/5]: I like the concept of having only one arrow that you have to go pick up again. It makes every shot you take that much more meaningful, and there's a sort of planning phase that goes into every combat encounter (at least when the enemies have more than one heart). First, you have to decide where you're going to go after the arrow hits the enemy, since you won't be safe and you won't have any ammo left. Then, you have to execute that plan and adapt to the situation as it changes. The main reason I rated 3/5 is because the engagement doesn't last for long, and after a while I got so good at the game that I could easily go on without dying. Though the game is endless, the difficulty never seems to increase. It's nice that there are so many different animations and sprites for enemies, but I wish they had different attack patterns rather than just looking different and having different amounts of health. I almost wish this was a level-based game with puzzle elements and small combat encounters rather than an endless survival arena. It's a good concept, but I think the execution fell short for me, and it was only a minute or so before the gameplay started to feel repetitive.

Adherence to the Theme [5/5]: It's a twin-stick shooter game where you only have one bullet. Nice!

Originality [2/5]: The concept of an arena shooter with only one bullet has been done before. A good example is Titan Souls. In that game, you have one arrow like in this game. However, in addition to walking over it to pick the arrow back up, you can use magnetic gloves to draw it back towards yourself. I recommend checking it out and comparing it to your own game! Although the "one bullet shooter" game idea has been done before, I've never seen it done in an endless arena setting like this before, so there's some amount of originality to it.

Overall, good job! Keep doing what you're doing, and +1 from me for using Godot :)

Thank you kindly for your detailed feedback!

Non of us knew any game with this premise so we felt pretty confident about it, but there it is!
I guess that's the curse of us game devs, nothing hasn't been done already. :D

"Though the game is endless, the difficulty never seems to increase."

Oh well we do have a difficulty curve. In the beginning there are only 2-3 enemies with 1-3 health gradually increasing to up to 10 enemies with up to 7 health at 50.000 score.

(with some enemies having 1 or 2 bonus health but are slower for slight variety)
Maybe it is not steep enough.

Anyways, thanks again for the feedback, much appreciated! :)

This is brilliant, I really like the art style and the concept, addictive and fun! :)

I love the game. Very satisfying specially when aligning the enemies in a straight line. The art also reminds me of a Mana game. Great job!

Glad you liked it. Art was specially made and designed and took a lot, so happy to see the effort was worth.