A test of your reflexes and coordination
Submitted by jmthomas6 — 17 hours, 59 minutes before the deadline
Add to collection 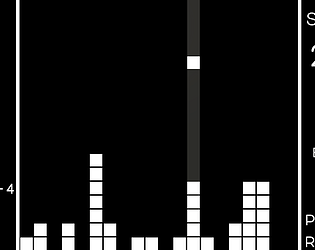 I like the idea, but the movement was too erratic for me. Maybe with more practice it would be easier, but my first impression is that it's a very luck based game right now.

I find the block movement a bit fast as well. Maybe start slow and ramp up the speed over time? Also I would have liked if the first few rows were randomly prefilled with some blocks already, so you can get right into action. Really love how you implemented the scoring (building higher stacks results in more minus points, effectively preventing you from just spamming the space key) and that you added an option to end the game prematurely to preserve your score. Nice execution overall!

My game: https://njamster.itch.io/wonkey (playable in browser, not mobile friendly)

Really like the idea, maybe a bit too fast, at least for me.. ;)

Cool idea! But the erratic movement of the block makes it pretty hard to control. Still fun tho, so there is some potential here!

Please check out our game at https://itch.io/jam/gmtk-2019/rate/463868! Any feedback would be greatly appreciated!

Submitted
Her only Home
LikeReply
Team ToomSubmitted300 days ago(+1)

It is an interesting idea, but it is too hard. The block moves so fast that I can hardly try to place it where I wanted. Maybe make it that it starts slower, and gets faster over time.

It was very difficult to control. Sometimes I was sure that I'll place the block at certain place but, when I press Space, it ends up like 3 blocks to the left of that.

However, it's really cool idea! I definitely see some potential here. :D

Submitted
Only One Has To Score
LikeReply
OrasundSubmitted302 days ago(+1)

Love it. It has a perfect design, fits the theme is truly original ;) take my 15 stars.

This was fun! You stuck to the theme very well! I ended up mashing my spacebar to see where blocks would land and it turned out I was better at it when mashing than when I was trying haha!

An interesting idea! I really like that piling up high takes away more and more points, it puts you under pressure when you keep missing the same spot!

I appretiate the idea, but I think there is only one problem - a lack of difficulty progression. It would be better if speed of the block and size of the level incresed gradually whith scores. Right now the game is very hard from the start.

Submitted
One Spear, One Kill
LikeReply
jermrellumSubmitted303 days ago (1 edit) (+2)

I don't think the block movements are too fast.  Wouldn't this game be trivial otherwise?

Anyway, blocks building sideways doesn't seem to happen frequently enough at first, and since they happened on the side of the screen initially for me, I thought it was a glitch.  I wish that that factored more into the game because it's an interesting idea and makes the game feel more like Tetris and not like a Stacker arcade machine.

Though, I feel like how the scoring is done really can change everything when it comes to design.  There are some interesting decisions here  -  the fact that you lose score if blocks pile too high adds depth, and giving the player a choice to stop adds an interesting gamble for the player, but what might have been interesting too is if you got more points for clearing lines when they're higher up.  Then you're incentivized to play more dangerously to score higher, which keeps the game away from being like a timing minigame.

Block movements is way to fast. This should have been tune down a little.

The idea is neat, so maybe it's not missing much to be a good game.