A rhythm game where rhythm doesn't matter
Submitted by Itooh (@Itooh_) — 2 hours, 45 minutes before the deadline
Add to collection 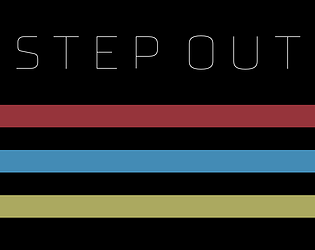 i think it's cool but it's very difficult or I'm just bad at this type of games well done.

You can go checkout my entry if you pleased it will be nice if you rated and left feedback.

Really interesting concept, and overall seemed polished and fun! It is quite challenging, though. One thing that may make it more approachable would be to switch out the control keys (which seem somewhat arbitrary?) for something easier to conceptualize - for example 'D', 'F', 'space', 'J', and 'K' (4 of the home keys, and the space bar for symmetry). Well done!

I've chosen the current layout mostly because those letters are aligned both on QWERTY and AZERTY keyboards. Unfortunately, this isn't true for all keyboards, and it remains weird even so. An alternative I've recently considered is using 12345 instead. It should remains the same for most keyboards, and it has the mental alignment I look for (even if it's still uncommon for a game).

Glad that you enjoyed it despite the tough controls! Thank you for your feedback!

Well done! I see we had very similar ideas!

Very similar indeed! In fact there have been several interesting rhythm games on this jam, with some cool variations. I'm glad you enjoyed this one. Thanks!

Awesome game but too difficult at first! but one you got used to it, it plays really well!

Submitted
The Girl, Wisp, and a Dream
LikeReply
ItoohDeveloper3 years ago

Yeah, the difficulty curve is weird. It's very hard right at the start, but becomes easier once you understand the rules and find some winning strategies…

I'm glad that you passed the tough learning and enjoyed the game! Thank you.

I'd love to see a version where there are less dots to bounce around, having to manage all those bouncing around with the controls made it a little less enjoyable than I hoped it to be

Actually you don't have to manage them all. Focusing on one color only, and keeping a restricted number of active notes, is the intended strategy. Ignoring inactive notes or other colors is not penalized. Unfortunately I fear I haven't made that clear enough. The reason that there is so many dots on the screen is mainly so that they can bounce with each other.

the control scheme is a little fiddly but the arcane "figure it out as you go" approach makes for a rewarding experience. The design fits the brief nicely. It takes a genre and removes the core concept, replacing it with a surprising and challenging alternative that remains in the spirit of the original genre. Well done.

Thank you! Happy that you enjoyed the puzzle part of the game.

Haha, it's not the first time this happen in a jam. I finish my game, but players don't!^^'

Between the awkward controls and the randomness, this one was pretty tough to balance… I hope you still had a bit of fun. Thanks for your feedback!

Honestly the idea was neat looking, I wish I was good enough to test it out

Oh, which keyboard do you use?

The controls are more challenging than I expected, I must say. I'm happy you could make it to the end though! I didn't thought spamming the keys was a working strategy, but that's cool too! =) Thank you for your comment.

The game is fun, but five keys is a really awkward number; you can't comfortably play it with either one or two hands.

Mmm, question: would have it been better if the keys were 12345 instead of DFGHJ?

Either way, I admit it's a very unusual control scheme. I hope you had still fun. Thank you for your feedback!

The music was excellent, well done

Hard enough to play with this number of keys, can be add difficulty modes with more or fewer keys but fun concept !

In an early version, there was 8 keys to play with. It was a nightmare! In the end, 5 was the best compromise between something playable and musically interesting. Glad you liked the idea!

We had so much fun ! Really difficult but meh, we spammed all five keys and we beat the game (with the little message). The rythm game without rythm was risky, and you managed to create a game that is fun. That goes to my collection !

Really glad you liked it! I'm surprised spamming the keys works so well, but in my experience the best way to play is indeed not thinking too much about it and just hitting notes here and there. Thank you for your comment!

It's way too difficult but I like the idea.

This is really unique and creative! It took my a while to figure out how it works but one I did it is pretty fun.

Thank you! I like games that let the player has to experiment a bit to find out the rule by themselves, so I hope this one succeeds in that.

Pretty hard to play, like the idea but its just to difficult to keep all the notes after they become active

Yes, the game is pretty challenging indeed. You're not supposed to catch every note (focusing on one color and a restricted number of active notes is more efficient), but even so it quite difficult. Hope you were still able to reach the end. Thank you for your feedback!