Embody one of many faceless pilots and destroy the Queen
Submitted by Lateralis (@lateralismusic) — 1 day, 11 hours before the deadline
Add to collection

Very cool to play ! I like the fact that the game is focused on 1 boss, funny that there is Winry from FMA Haha, I lost 15 pilots ^^

Damn, this is amazing! So much fun and pretty difficult.. I keep coming to this. Awesome job!!

Really fun controls and graphics. Wish I could stay alive longer to enjoy them. Gave up after losing a bunch of pilots. Poor souls!

Congrats on your game! (if you make changes and the game gets easier, please tell me!)

I'm sad to hear you gave up!  Had you been able to buy a decent amount of upgrades?

I managed to get only the cheapest upgrade haha

I was thinking, maybe if the camera was a little farther away, it’d be easier to react, since the ship’s movement is fast. I would frequently die as soon as a projectile or wyrm shows up in my screen.

But maybe my reflexes are not so good xD

Holy crap that is fun. I loooooooove the controls. A really unique control approach to a bullet hell type game.

R.I.P. to the 20 pilots burned through

Really nice game! I sucked at it but enjoyed myself anyway

That cover image was a win for me, simply had to see what is it about.

Definitely a game to try

For the sequel, we should train dogs to be fighter pilots. The dog always survives.

Maybe my favourite game I played in this jam. I love it. I actually like a little more the movement here than in Lufthrausers. The only complain I have is that it takes too long between tries.

I love this game. I kept playing it a lot.

Super cool art! This worm is really tough. I can only get like a quarter of its health down (or less). But it's obvious a lot of work went into this, it looks great.

So I came back to this because I wanted to really follow the full progression of the game and give it the attention it deserved and I defeated the wyrm! I definitely really enjoyed the ride! I think I have two points of feedback:

In the early game, I felt like a majority of my time was spent in menus because the 1 hit death was super punishing! Once, I had more abilities and was able to survive longer, the gameplay really shined and  it was very fun! I know the goal is to give the player a strong sense of progression throughout the experience, I just wonder whether the baseline power level could be buffed a bit so as to not have such short, short early lives (could just me being bad at the game though)

This one was minor and maybe not even that much of a criticism, but in the late game when I had lots of points to spend in the store, I would have loved to purchase multiple items at once, instead of getting thrown right back into the mix after one purchase.

Overall though, I really enjoyed this experience! The arc of the gameplay had a clear and enjoyable trajectory and the SFX and art were spot on.

As proof of my conquest! (just minimized for the screenshot) 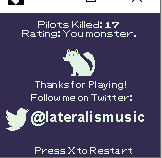 I wasn't great at this but I was enjoyable to play :)

what a game! so polished. i love it. been watching it progress on twitter, and the final result is really, really strong.