​The prince's has been kidnapped into the woods. So you are the only mage that can track his trail and rescue him!​
Submitted by Dev Penguin — 13 minutes, 54 seconds before the deadline
Add to collection 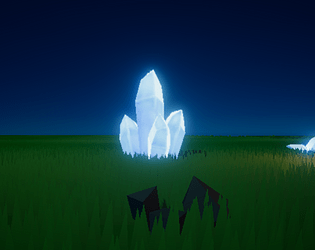 Not bad at all! homever i don't like too much the player controller without left and right.

I wondered if there's some place to get to, or just wave after wave of 'shrooms and snakes?

I also couldn't really make out what my health level was...

As for moving sideways, well if you shot at an angle you turned around and you could follow in the direction the fireballs were flying...

Great premise for the game, I enjoyed shooting fireballs for a while :).
I can accept the no left or right for the path walking phase, but when it goes top camera and waves mode (nice mix of set ups there, I liked that a lot), then there needs to be left and right for the player to dodge. You can then balance this by giving the player MORE enemies to fight.
If you're continuing and processing the game, I'd want to learn more spells, and have a need to use them vs different enemies :), but it's a great job getting this game as far as it is in 2 weeks! well done!

Cool concept and a nice looking game, but as Radam said not being able to move sideways makes it a bit difficult.

I loved the visuals!  Good game!

Cool game and some nice art and visuals, A little animation or sound when you hit enemies for a visual and audio feedback to the player would be nice but this was a really nice looking game good job. I played it on a live stream tonight if you wanted to see you can check a replay here.

Nice 3d game! I liked the visuals the most. I would prefer if I could turn around myself with the left and right arrows.

Great Work to have this done in 2 weeks!

Controls took a minute to learn, but it handled rather well

Ran into a bug when backed into a corner the game froze up on me.

Great job on this! feels like you can do alot with it.

I would have liked to be able to move sideways :)

Submitted
Once Upon a Nugget
LikeReply
CFHMSubmitted108 days ago(+2)

Wow, this looks really nice. Congrats on making this in the two weeks! The controls are a little weird, but once I got used to them, I kinda liked it. Sorta like... tank controls, but modernized? Felt different in a good way. I think with more movespeed and some tweaking, there could be some interesting mastery in there. Graphics were wonderful. Wish you had had time for a little more audio, but I'm sure you do too lol. I couldn't beat the 2nd set of waves. Just too many enemies to deal with and I haven't mastered the controls. Nice job on this!

Love the concept and it made me want to keep playing, but I didn't think I could get past the 2nd area.

There's no way to avoid the guys coming at you and you cant shoot fast enough to kill them all. One of the main issues I had was that the dead enemies would block my shots, so I couldn't hit some of the living ones. Also, a crosshair would help to aim, because the mouse was a little off from where the fireballs were going. Would love to try again if you release another version.
Edit: forgot to mention, the visuals were great and its a major reason that I found this so appealing.

Found the controls a bit odd tbh, need to be able to move left and right.

I only miss the left/right movement, and I didn't understand why the snake'sh' monster was killing me!

Well done. the audio is done really very well. You did a fantastic job on the vfx. Controls were tricky at first but in the end it fits with everything, perhaps a little slow, but you can shoot. Great job.

Well done. the audio is done really very well. You did a fantastic job on the vfx. Controls were tricky at first but in the end it fits with everything, perhaps a little slow, but you can shoot. Great job.

It's beautiful, but the controls kind of ruined it for me. I wanted the ability to strafe or look around more, such a beautiful world and I can't look around to enjoy it..

This is a very pretty game. The hard control make the game challenging, which balance things out! Well done :)

I love the sound! Contols are pretty hard do master.

Really a lot to like with this! The visuals and the sound effects are outstanding and the menu and titling all look great. The controls did take a minute to get used to but I think it's great to try new ways of doing things. Moving to the top view camera really helped the excitement level for the bigger battles.

Your team did an excellent job!

Submitted
Jump Over the Rainbow!
LikeReply
experial83Submitted110 days ago(+2)

I appreciate the tutorial before wave 1. The graphics are neat and I like the side effect of the trees "melting" as they become rendered lol. The enemies and character models are well made/chosen. The controls were a little tricky to get used to. Good job!