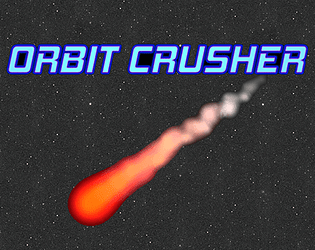 I found it too frustrating to try to play, though, because it seemed like the patterns were short and frequently the orbs appeared only moments before the comet crashed into them.  I don't know if my mouse sensitivity isn't high enough to play this game or what, but I found myself annoyed at losing energy trying to figure out what was going to light up so that I could drag it.  It would have been less of an issue if I didn't get the lose/defeat screen, and gameplay had just continued.  I'm not entirely sure what the point of the energy was, though - it seemed like there was a finite pattern that you were trying to get through (I would progress to the next level even if my energy wasn't "full").

The sound was fantastic.  I really liked that part of the game.  I just found the quick reaction time and frequent setbacks to be too unfun to finish it.  I think I got as far as level 3.

Very satisfying game! The last 2 were a bit challenging but I managed to get through all levels in one go without dying completely :-)

Love the music, and the beat it did when the comet hit the purple things :-)

The gameplay is awesome, and I believe with even more polish, visually, and more features, this would be a very interesting game to have and play.

Very well done on this game!

Wow, dude, as far as I know, you're the first to complete it without dying. I'm impressed! Maybe I should put in a zero-deaths achievement called "True Gamer" XD
And thanks for the nice comment! Glad you to hear you enjoyed it, and see some potential in it :)

Challenging and fun to play. Brilliant work with the audio! Just make it longer, give the visuals more stylish look and you have a great game to ship I believe

Thanks for playing! So glad you enjoyed it :)

I really enjoyed the game, and it was really cool. The only suggestion I have is that maybe there should be some feedback as to when the flames are going to turn purple. It got a little frustrating towards the end when I always went to the ones that appeared last!

Glad you liked it, and thanks for the helpful feedback!

That's a great point! How do you think I could implement such feedback? With sound? Or visually somehow? I'm not sure how to best go about it :)

The music melds superbly with the visuals and the game. It was more challenging than I thought.

A very unique take on the theme, which i like! It has a good atmosphere and sound, but for me I wasnt a big fan of the visual and UI. But overall a good game.

Thanks for the comment. I'm definitely gonna work on the visuals. If you have any ideas for improvements, I'd love to hear it :)

So many positive reviews. Any chance for a Mac or web build? Haha

I wish! For some unknown reason I couldn't get the music to sync on mac or webGL unfortunately. Super weird!

Hopefully I can get it work on Android & iOS :)

You're using mac, I assume?

And yep, on a Mac! Admittedly, it does make my game playing more limited… I’m mostly play indies so I’m happy enough with it

Yeah, I know what you mean. I was on a mac for 7 years until recently.
I'll let you know if I get a mac version up and running anytime soon :D

That would be awesome! If not, I’ve given in and will get a PC sometime this year. Still can’t beat the reach of software on it + development is a lot easier on Windows now than it was before. For now, I’ll keep it in my collection :-)

This is wonderful! I love the visuals, simple but striking, and I was curious what you did with the audio because you mentioned you were focused on sounds at another's game page and THIS GAME DID NOT DISAPPOINT. The sounds make it %100 better than it already is. My only suggestion is to change fonts, dafont.com has amazing free fonts (but check if they are %100 free) Everything is so great but the fonts don't fit the wonderful visuals.

Well done, and all that work you put into sounds really paid off! Following you to see what you will make in the future.

It's so nice to hear about a positive experience like that. Glad you weren't dissapointed :D

And super-thanks for the font-tip! I'll definitely try if I can find a good font in there :)

I really enjoyed the mechanic of dragging the purple orbs around! The sounds were really nice :D. Only thing as others have said is a better UI. Great job!

Submitted
A Walk Through Time
LikeReply
Esben NyboeDeveloper1 year ago

Thanks for the nice comment! Much appreciated!
I'm very curious about, how I could improve the UI. So, if you don't mind me asking, what in particular do you think needs improvement? :)
I don't have a very good intuition when it comes to visual design, so I'm not sure what "better UI" actually means :D

I really loved this game. The music is great, the lights are mesmerizing, the gameplay is tense! My only advice is polish it and ship it :) Great job!

Thanks for the positive feedback :) that's awesome to hear!

Ah, I do have an improvement sugestion: This game harder to understand for people with daltonism. I found that the green and yellow orbs are very hard to distinguish. Not that it lowers the score in any way though :)

Like the game, lots of tension  lovely music to set the atmosphere well done

Crazy fun game! The only problem I had was that it wasn't longer!

Really great game! I always love new and concepts for control schemes, and this was really spectacular. The way the game play facilitates tension simply through dragging orbs across a screen is great, and I can totally see this being a really good game for mobile. Nice work!

I'm so glad you liked it! Maybe I should try and make a mobile version at some point :)

I think this has been the best game I've played for this jam! Really loved the music and the beats from the particle bouncing off the orbits :)

Best gameplay of the jam once I knew what I was doing, it took me a few reads of the tutorial to understand.

Best gameplay of the jam once I knew what I was doing, it took me a few reads of the tutorial to understand.

Thanks for the nice comment! Yeah, the gameplay concept is kinda weird :D but I'm glad to hear you got a hang of it!

that's nice to hear! thanks for playing :)

Really good game. I like how the sounds match with the animations and collisions perfectly. It's a really polished game!

Thanks for the awesome feedback! :)