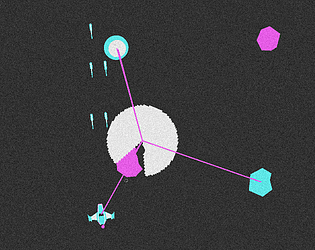 Theme interpretation
It's all crazy in here. It's pacman, asteroids and bomberman combined in one game. Pacman explodes on your command, but on some levels you'll be required to shoot lasers. When you destroy asteroids they split in smaller ones and so do ghosts. It's all nuts.

Just got round to playing this game. The idea is super good, I was really excited to try it and it was quite fun to play. Awesome visuals as well!

One thing that I found difficult was the controls though, well, I think more the physics. I think it'd have been nice to have a bit more control over your ship. Especially where the goal is to lure the enemy to their doom! It was also hard to time the bomb explosion just because it took a moment after you pressed space. I think it'd be nice if it was immediate, it give the user a sense of "I'm dope!" when they managed to detonate something during a quick pass by of the ghosts!

Overall I enjoyed it and would love to see it developed further!

This game is so cool! Very polished in all aspects and VERY fun to play. The interpretation of the theme is definitely 5 stars. Amazing work!

Very fun and interesting hybrid! some sounds were too loud though :(

If you want you can check our entry for the jam:

All feedback possible is really appreciated

Well its definitely interesting and different! Fits the theme well!

I really liked the idea and gameplay! It was a lot of fun to play :-)

The idea is interesting but the controls didn't feel well. I think it is the time it takes the ship to change its direction. I didn't like the music but the visual style was fine. The main menu reminded me of Metal Gear Solid 3: Snake Eater.

Why Pac Man don't kill the ghosts by eating them like in the real Pacman? At the moment, Pac Man feels more like a bomb that follows the ship and increases its impact ratio over time. It would be interesting if the player had to build a path for Pac Man to eat the ghosts.

Thanks a lot for playing! That's good criticism that we'll take in mind after voting is over. Sad that you didn't like the music, but so it is. 😉

Exploding the Pacman is what the aim was, although initially we did experiment with Pacman eating the ghosts. Pacman as a walking bomb matches the theme better.

Simply rules but have great depth.
I must think a while to figure out some good approach.

Wow, this is batshit crazy and fun. This game has beaten every loving shit out of me. Would visit again! +++

Like the twist and retro graphics and arcade feel of this game. One slight annoyance the controls feel a bit unresponsive at times, but overall, love it!

Thank you for trying it out!

Could you elaborate on the unresponsiveness of the controls a bit? Was it the movement, shooting or something else?

Carzy hard and interesting game. Do check our game too 😁

Really interesting concept, the visuals and sound fit pretty well. Only thing that really bored me was how slow the acceleration was, made it hard to turn and set up the PACbomb in place.

I really like the universe ! Except the sound of the ship is quite boring after a moment. Great job !

I really enjoyed this game.  I love how it fits as a mesh of Asteroid/Pac-Man/Bomber Man with all the mechanics feeling like they had purpose.  Also loved the music, it really helped to set the atmosphere.

Did you find it too hard? There wasn't much time for balancing, so it needs a few tweaks.

The only major thing in terms of difficulty was the lack of checkpoints and I think the ghost spawns too close to the player in the first level.  Besides that it felt relatively balanced.

As soon as the game starts I get taken over and attacked until I die. trying to move or explode, but I can not get away from the ghosts and just die.

Hold on to the UP arrow key or W to accelerate. You can escape the ghost once you gain enough speed. It shouldn't take long.

Crazy hard to get a hang on things. Can't say I've played a game like it. It all fits together well though. Nice work.

Congrats on finishing your game!

The code looks like a Christmas tree, but at least there's a game out of it. ;)