Jam game 2017
Submitted by Rhornbeck — 3 minutes, 5 seconds before the deadline
Add to collection 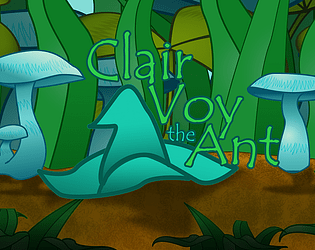 Nice idea and visuals. Loved the mechanism of summoning shrooms and thorns. Has a lot of potential to have a story and a 'big' game. :D

Collision states need to be worked out.

I just uploaded an updated version of my game above. I reworked the enemies a bit so they don't get stuck as much, although they may spawn in a rock and be stuck sometimes. I'll fix that later. I also added animation to the vines, an explosion to the fireball when it hits a rock or enemy. Made the fireball last longer. Added foreground and background scrolling. I also fixed a few bugs that were pointed out in previous comments. The player doesn't always face right when you stop moving, and the black screen after death has been updated and will no longer be an issue. Also it isn't mentioned in game yet but F1 makes the game full screen. Enjoy, and thank you all for the wonderful feedback. Jam on!

Nice art + idea, love the grow mushroom platforms. A lot of potential for a fun game once the collision bugs are ironed out.

Played your game here, it was fun~

Great work on this one! Very interesting concept, I liked the graphics and the controls were well done. I really liked that crosshair, I found that you could run away while summoning a fireball and totally firebackward at the enemy chasing you. I was using fireballs until I discovered the Vines. Those were the sickest trick in the book, I think at one point I wrapped up 3 red ants at once and they were dispatched AT THE SAME TIME! I felt like somekind of ant god with those awesome spells. It was wild. Overall, very entertaining and A+++ on the vines! AwEsOmE!

i couldnt make it very far, got stuck at what i assume is the second jump right after the first ant. artwork looks cool but i was kinda lost on direction. i read thru the comments and apparently its just me too -_-

wouldve liked to play more, and unfortunately your video isnt working either!

Cool mushroom power. Art is excellent. The gameplay mechanics needed a bit more work - my character always face to the right, enemies get stuck moving to the left, and after the game over screen (I laughed at "you dead!" the ghosted-look followed me to the new game) maybe just focus on one feature at a time until they feel good during the next jam?

That said, I think you were *very* close to having all that working well, and it looks like a cool platformer. Great jam!

It's a neat concept, but a little under-developed.  I think if the powers could have been a bit more snappy and the enemies a bit more aggressive, then you cold be onto something.  As it is, the enemies are kinda helpless against the thorns, and the fireballs are a bit too slow to be useful.

Still, it's got some nice potential.

Hey @Rhornbeck, sorry for spamming your game's page - not sure how else to message you ;)  Melty caterpilar game is patched again if you want to give it another go!  I think I nailed it this time, at least I hope :p

The video is up and running now! Thank you all for your patient.

FYI I've added an alternative colour mode for you for that Melt'Them All caterpillar game. The code to figure out which colour your caterpillar sits on is a bit ropy, so I can't have players pick their colour unfortunately.   Hopefully I got the colours right!!! ;)

@WisePunch I tried to upload a swf file and it is corrupted or something because it failed. I will be making a new video today for sure. And thanks for the heads up!

@TheCalster Thank you for the comment. I know druids have nature type abilities and I wanted to incorporate plant growth.  I plan to work on this to add more of a leveling system to unlock different abilities.

I'm going to play Jam Games on Thursday. I will defiantly be back here to try this. You're screenshots look cool.
P.S. Your video is not working.

I enjoyed the mushroom ability allowing you to reach the higher levels - interesting game mechanic!