My entry for brackeys game jam 2020.2
Submitted by Zoroarts (@Zoroarts_Dev) — 4 hours, 25 minutes before the deadline
Add to collection 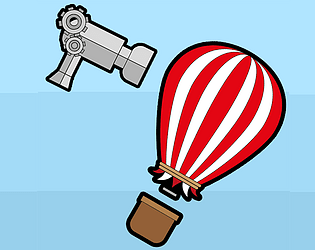 Ranked from 152 ratings. Score is adjusted from raw score by the median number of ratings per game in the jam.

In what way does your game fit the theme?
Its basically "Rewind" so you manipulate or Re Align the Wind to solve puzzles and save a hot air ballon from getting destroyed.

Did you write most of the code yourself and made all the assets from scratch?
I did everything from scratch except the music!

I really like the unusual approach to the theme. The game looks nice and i didn't really encounter any bugs. Great job!

I liked everything about the game except the controls, because I don't have a mouse, but a touchpad, so it was hard to control the fan. Great game anyway.

This is a neat little game! I have a few comments about it though that may make it better - take it how you will, but first, I wanna go through the good stuff:

1) Easy to learn mechanics - I think your game benefits from its relatively simple mechanics but you also have very short concise tutorial that was very easy to pick up.

The game was quite fun as a whole, very simple gameplay and easy to enjoy. There were a few nitpicks though:

The same thing happened in level 1 with the big grey power line towers, I didn't think they were obstacles until after I died and I realised it was shown in the tutorial. I just think the obstacles need better indicators.

2) Occasionally unforgiving obstacles - at the end of level 2 after the grueling multiples of spike launchers right before the end, there's just ONE more moving spike there. I didn't die fortunately but I think you would benefit from removing that.

In other words, your level design could use some more work to have better flow. Your level 2 has good flow, up towards a climax at the triple spike launchers then an ending.

3) Occasionally goofy controls - I think I understand how you made the wind mechanics work now. Because when I aim my wind gun upwards and blow the top of the balloon, it still pushes the balloon up (where in real physics, it would still blow the balloon down) - this is just a small nitpick, but if you wanted to take it further, you could implement more realistic physics.

Of more particular note, is the lack of a function to immediately flip the gun 180 horizontally. Scroll whell only controls make it difficult to make split second decisions when your balloon bounces off the top of a cloud and richochets flying towards the spike in front of me and I needed to stop it immediately but I couldn't because scroll wheel is too slow. Either implement a scroll-wheel sensitivity function, or the flip function - or both.

Very enjoyable game though. Well polished and I'm sure you've put a lot of work into this!

May be you could make the 'hair dryer' point towards the balloon automatically rather than having to control it with mouse scroll, but its fine.

Firstly the art looks great so well done on that. Not the biggest fan of having to use the mouse wheel to control the rotation, though I can't really tink of many alternatives. Liked the concept, good execution. Well done!

First of all I really like the controls, I saw some people didn't enjoy it, but I think it was a really good fit for the game.
While I like the play on words with the theme - it feels to me like a little bit too much of a stretch. I guess you could say you're re-applying the wind to the baloon, but to apply that explenation it would have to have some sorts of the baloon losing it's air, even in some sorts of cutscene. I'm not going to go too harsh on that, because I enjoy an experimentation over the theme more than doing the most obvious interpretation though. So it's just a little note to take.
Gameplay was very difficult to me and it started with a big difficulty spike right after the first obstacle. I think that especially in a jam game you could give the player some leeway. For example, getting the basket hit by the spikes shouldn't do an instant game over. That would make it a little bit more realistic for me too. Also right at the begining there is this tower, that I thought was an obstacle but it didn't game over me, so when I saw the bigger one I just wanted to fly right on it, but this one killed me, so I thought it was inconsistent or buggy.
To end on a high note, the music (which I see is made from scratch!) was so, so, sooo relaxing and nice. Very soothing and fitting with the cloud asthetic.

thank you very much for your honest opinion. I will continue developement on this game to make a full release one day , so your words help  me a lot improving the quality ^^

Glad you find it helpful, not everyone can take feedback well :D
Oh, and while developing the game further you can just ignore my "theme" rant, cause it will be non-issue by then, so that's good :D

Those people, who cant take criticism shouldnt become game devs xD. A area like gaming is divided in many sections, the pro gamer or e sport gamer for example wont have any interests in a relaxing casual game and the casual "weekend gamer" wont have any interests on games with a big pro community. You cant get everyone happy so you should listen to criticism and try to make other people want to play your gamw too.  Many gamedevs or companies dont give a fuc* about the audience opinion and thats the reason for games loosing their hype or "die" . I develope games because its my love and life not (yet) because of money. I mean im 17 and a student but ofcourse i want to earn something in the future ;D but money or fame wont be my main reason to develope games. So I want to make my community or players happy and give them a great and enjoyable time while playing my games thats the point why criticism and feedback is very important to me :D

Hey! that's really nice. I wish I started doing jams when I was 17, maybe I would be in the industry by now if that happened :D
Keep up the good spirit, and best of luck for the future!

thank you very much! You too, of course ^^

I was not very fond of using the mouse wheel, but on the other hand I can understand that there weren't many alternatives either. An original take on the theme, good job!

thank you for your feedback!

Nice game, though a bit too challenging for me^^

Relaxing game, some difficulty to it (in a nice way), good and consistent art direction and soundscape. Well done!

Control scheme feels good too, the little polish of some clouds moving with the wind and such is a nice touch, the background activities and scenery is also very pleasant with the art style.

Nice and fun to play, hard but not at the point where it gets frustrating. Cool game!

Submitted
Back in Lab
LikeReply
ZoroartsDeveloper2 years ago(+1)

You did everything here yourself? Very impressive; the art's great, the music's good, the gameplay is simple but effective, and you didn't skimp on UI either. Nice work! If I would adjust anything, perhaps make the pause menu activate via ESC instad of Tab - I think it would be a lot more intuitive for many players.

yeah I thought that I cant make it on Esc because in play in Browser you deyctivate full screen with Esc too. But thank you for the kind words :D

Ah, that's a good point. In that case, maybe P would be a decent choice. No problem!

Enjoyed the music and the innovative take on the theme. Pretty good for 4 days dev!

Submitted
Ghosts of Futures Past
LikeReply
ZoroartsDeveloper2 years ago

Thank you really much! I appreciate your feedback :D

Amazing game i loved the artstyle and the controls were really smooth and fun amazing job well done :)

Very fun game.Great controls and music.I really liked the pop effect of the baloon :).I think there are some bugs about the camera but cant put my finger on it.Overall great work :D

Submitted
Ghosts of Futures Past
LikeReply
ZoroartsDeveloper2 years ago

swing past our game and give it a rate if you can :)

Nice take on the theme. The controls seems a bit weird until you get used to it. I think using the left mouse button to blow and WS or AD to rotate would be more comfrotable.

Thanks for your criticism and feedback! :D

Could you please play and rate my game?

Thanks Zoroarts! Were you able to play and rate my game too?