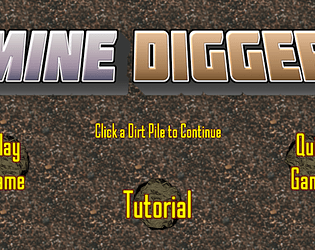 The game was pretty fun! I might have glitched out the tutorial though. Not sure. But the main game portion was really fun! I actually got a highscore! There are only two things I could recommend. Number 1, give the player some color, and number 2, add some more background music to the game. Apart from that, the game was amazing! (:

Interesting game! It still requires some polishing. The tutorial is well done.

Nice idea! I like the upgrades, and the gameplay loop is good.

The price of oxygen rises too quickly, cutting a single play session short.

It's unintuitive to have to stand on top of the hole you're digging, I'd expect to be able to do it from the side of the hole. I could lead to some bugs with several adjacent holes though. Then again, I was able to dig two holes at once already.

It's a bit odd for the guy to keep digging treasures to his last breath, never getting to use them. You could give the players an ability to escape with all the money they currently have or keep digging, losing it all if they die.

The atmosphere of the game is creepy and claustrophobic, it really makes you anxious to run out of oxygen! Digging holes as fast as you can to earn money and buy upgrades is a nice gameplay loop, though the oxygen is so expensive to buy it feels like you can't spend much money on the other upgrades. There's an interactive tutorial which is rare to see in an jam game! Good work!

Submitted
Into the Depths
LikeReply
iShock GamesSubmitted2 years ago

And I were able to move backwards by pressing"s" key

Wow cool game , it is a great game in my opinion keep up the good work, and rate me okay

An interesting concept but not very fun in my opinion. Mostly because it was just a game based on pure luck (or at least that's what I saw). The animations are okay but would need more polishing. The graphics are okay honestly for a game jam game. As other ones mentioned it here already the player control is something to work on. There's no walking back, no way to control the camera and not the body (which can be a good thing but the body rotation is weird). Maybe introduce more concepts into the game. Or make it at least not completely luck based.

Very rich content in the game. Nice mechanic. You need to pay more attention on the player control. Especially, the character move backwards when I press "s"!!!

Hope you learn in this game jam!

your game is kinda awesome , cool , keep up the good work and can you rate us please. :)))

A nice clicker game but with 3d Exploration! I've found it addicting, but wished you could figure out where the bombs are :(

I was almost winning and... Boom!

The concept of the game is great, but it feels like you went a bit too big for the time we had which left the game feeling quite unpolished and in some cases buggy.  When the game is playing smoothly though, it can be quite fun :) Good job!

Not really much to say about the gameplay. Looks like you got quite a bit done with the week you had available. I want to leave feedback that's actually useful.

I ran into a bug that broke my game and made me have to quit. I was on the first floor and had reinforced it to protect against mines. I hit the last mine and while the floor was breaking, I was holding space bar to dig a hole I was on top of. As a result, my guy got stuck in the crouch position as if he was still digging even though there was no hole there anymore. I was unable to move or do anything at all as my guy ran out of oxygen and died.

Thanks for reporting that, I'll make sure to see what's up.  Glad you played Mine Digger :)

The game has a great concept but really lacks polishing on the visuals, which turns the experience less enjoyable, for me at least. Maybe if you had gone for a solid colors or unlit art style it would get better results with a nice balance of productivity, I get it is a prototype but I would like to point that out still.

I like the premise of the game, it has a great foundation for expansion, like finding upgrades or even consumables, the upgrades are a nice addition and makes a nice difference. The core of the game is present, you just need to make it more interesting and a little bit more strategic, I like that you have two different types of holes, but as the game progresses and the oxygen gets A LOT more expensive, what I found myself doing is just digging the white holes in hopes I would get a treasure instead of a bomb, and digging the brown holes gives too little so it's not worth and I just ignored them, that isn't very strategic, is pure luck. Maybe a system or upgrade where I can scan or reveal treasure holes would be a nice addition.

I liked the music on the game, but the alien-like sound that was playing over it was super obnoxious, I don't know if it was put there to give some sense of danger or mystery, but for me it just spoiled the nice music on the background.

I still don't get why I can't go backwards.

Overall it's a nice game, just needs more polishing and thought out art style and identity.  Congrats on the submission!

If you have the time, we would really love for you to check, rate and give feedback on our game too, thanks!

the game had some troubles like the ui not scaling and the movement feels a little weird also i was able to move the shop (: Is good that you made a tutorial it was great and well implemented!

The game is fine with the mechanic, but i found that the multiply of oxygen price is not balance, it should be not double, or it will be hard to get enough money to buy some more x3, also if only you guys got time to exchange those ethan for the main player, but overall the game is already unique enough i liked it so far :D. And the idea the separate the tutorial level is awesome, since its really gave player all the info for the game ;)

Oh one more thing, maybe other already mention this, but it will be neat if i can use mouse to change direction and mouse click to interact :D, and i love how smooth the control is, great job on that ;)

Very nice game! I enjoyed playing it. The tutorial is really helpful to figure out the movement and the controls.

Submitted
Mole in a Hole
LikeReply
Zilyanus GamesSubmitted2 years ago