neon spirit
Submitted by Lukvasando — 1 hour, 30 minutes before the deadline
Add to collection 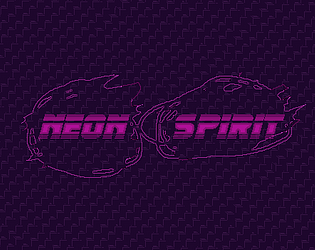 This is really nice. It's well-polished, has good music and the graphics are really pleasant to look at. And despite the tense nature of the gameplay, the ambiance really helps you relax. Great job!

Art and music were great! I enjoyed playing this, the camera movement felt off, and I could see the ground at time, still.. awesome game!

Wow! That was some amazing pixel art combined with great music. I loved the game! It was made with so much polish! Thanks for this game!

The art and music were really good! The hitbox on the spikes was a little large, and the game window was too big for my laptop screen! Also the music restarting every death got a little old. Still it was a really good jam game!

I liked the hoverboard and the music! It felt like the spikes were a little unforgiving. As in I would die from them when I felt like I had jumped in time. I also died right in front of the end because I mistimed the jump, maybe that ending part can just be automated or something.

I love the art and audio! Really nice design! :D And the idea itself is really cool!
My main criticisms were that the screen wasn't scaled properly and the game over menu was quite slow, and you had to use your mouse with it! Nice work with it overall! :D

Great art and music! Love the hoverboard mechanic. I'm rubbish at platform games but this was super fun! Took me sometime to figure out if I should jump or use the hoverboard but multiple ways of approaching an obstacle was great. Good job

Nice art! the colors used were very pretty and made it just hit a bit better! i loved the theme correlation and the game itself

maybe removing the death menu or make it faster will help the pace of the game it was quite slow!

Your game makes me realise how terrible I am at side-scrollers... haha

The colours are fantastic, sprites crisp and music well fitting--you really managed to built a very strong and coherent mood which is an incredibly hard thing to do!!

For me (after dying a lot) it may have been nice to have the level simply restart on death instead of having the menu come up, as that slowed down the game a lot for me.

I also do agree that the jump felt a little slack, making it hard to jump again after landing.

Also could be cool to see the tutorial be integrated into the gameplay in some way--say it could happen the same way but you get to try out pressing the buttons to get a feel for the game before it starts.

Look forward to seeing what comes next!

Nice ambient! Nice colours, it's hard when you just come out of a big jump and u need the hoverboard to pass the spikes, maybe the cooldown it's a bit to long, but i like it! :)

Maaan those colours... you can see I'd love that combination by just looking at my profile logo :) great game bdw! Awesome visuals and game design.

*pasting here from your page*

Amazing art and sounds! They gave off some kind of melancholic atmosphere that I really enjoyed.

Great fitting with the theme and it’s really well designed.

Maybe the player shouldn’t lose sight of the ground when jumping and the spikes could have more of a “dangerous” look, but that’s just some thoughts. Still really liked this one c: