Submitted by PZG — 1 day, 17 hours before the deadline
Add to collection 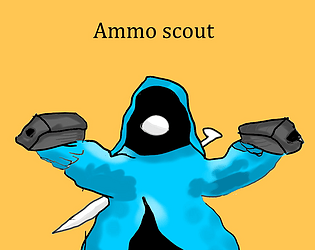 Cool game, really reminded me of nuclear throne with the setting. The enemies are a bit unbalanced, such as the red ones, whose bullets are big and too fast to dodge in close range, enemy bullet speeds need to be lowered since the player only has 5 HP. Maybe health pickups would have made the game less punishing.

But the best part of the game is the stealth mechanic, since its the best way to kill enemies, I found myself creeping next to enemies and the enemies noticing me before I made the kill, which led to intense firefights. I think you can expand on this gameplay style of stealth first then run and gun.

(OOB. I backstabbed an enemy near a corner and it pushed me into the wall) 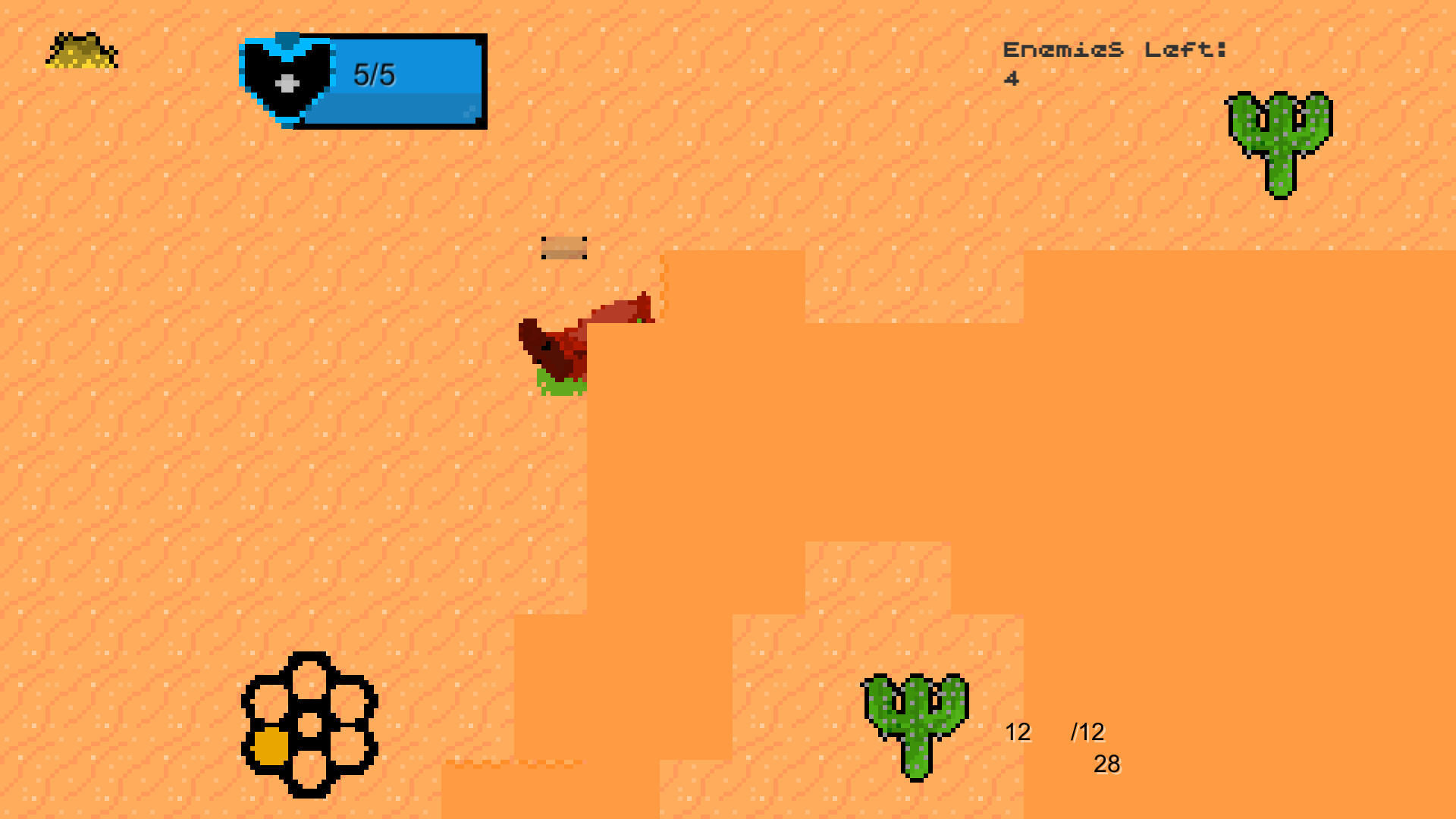 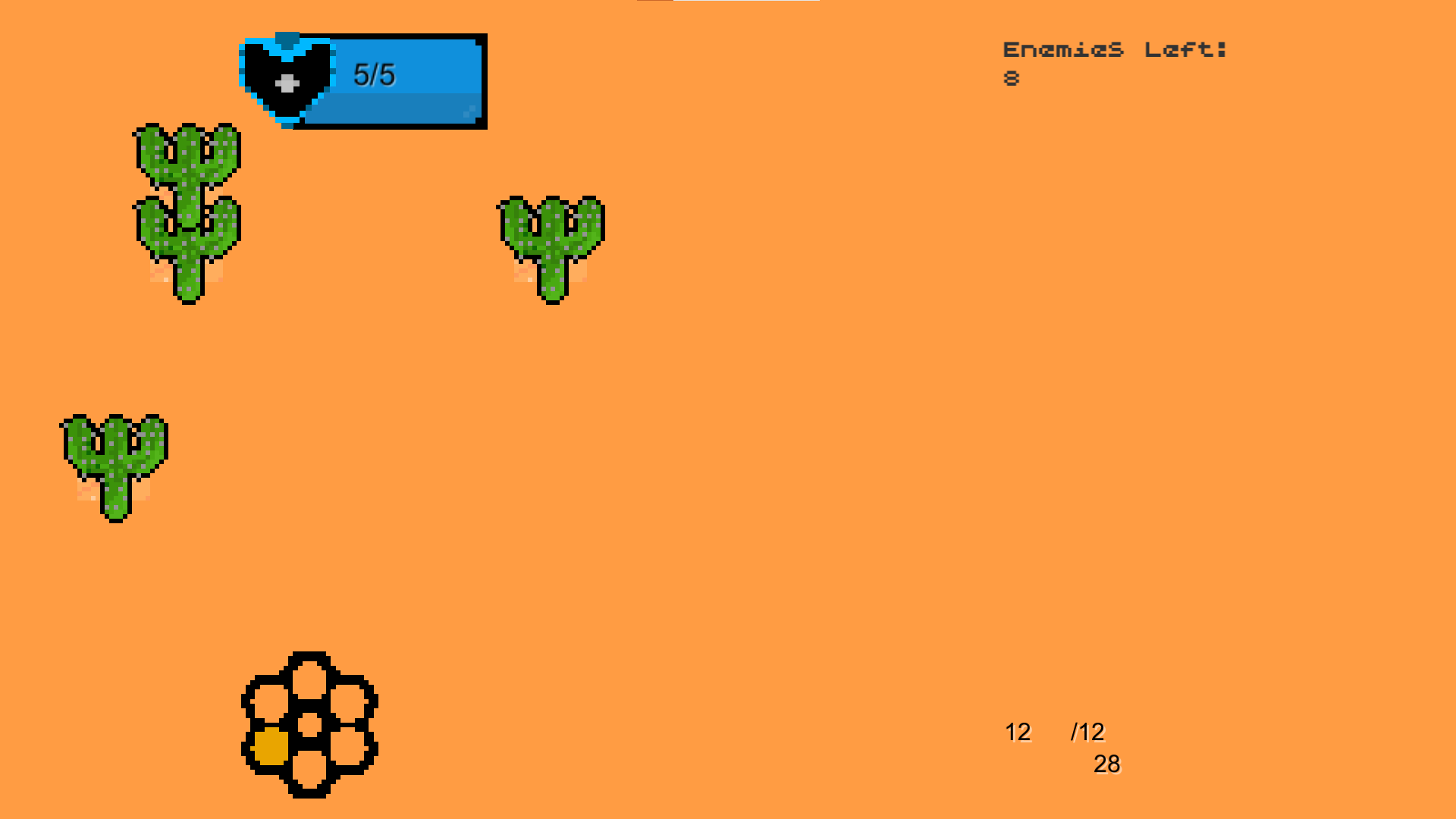 Ok i have a few things to say: The game is fun, music is especially dope, but is held back by a lot of things. Most of them already being said already, but i didn't knew thet until almost done writing so i will repeat them again, i guess...

First of all, the game is a shooter but is incredibly hard to aim in it, i think it's because of the camera moving a little too much. Backstabbing was the way to go for me (also because the gun does too little damage, and the backstab insta kills even the biggest enemies without any cooldown whatsoever, and even if two eneimes are overlapped it will kill them all)

However, the key to backstab (E) is incredibly awkward and hard to press, and the hitbox to backstab the enemies is way to small and unforgiving, resulting in you being spotted an dying, especially because once the enemies see you they never unsee you again, even if they can't reach you (yes, that happened, the enemy was in a "U" shaped wall and tried to reach me walking towards the wall instad of going around).

Second the visibility cone and the actual cone hitbox (if is a cone at all, at times it seemed like a raycast to me, if that's the case remove the cone indicator and replace it with a "!" sign) isn't matching, the actual size it's much bigger resulting in the enemies feeling cheap and like they're cheating. Also the enemy for the backstabbing tutorial has not a cone, which is weird

Third the explanation text are hidden and hard to spot, resulting in the player being confused for 10 whole seconds and starting to explore the small spawning room.  (EDIT. I found ot later that is due to an resolution error, but is still a problem i wanted to brought that up. :/)

Last but not least, the dash was an incredible tool to add, very usefull, especially to escape or doing fast kills (on that note, push the game a little more on a more fast note, it will be much fun that way, especially because the game as rn tends more on the stealth side, ans stealth can have a slow phasing sometimes), but like someone already said doing things in you game doesn't feel very satisfying: Add more juice to everything the player does: a scream if the enemies dies, a bit of screen shake, etc.

Ps. I found ot that that yellow thing in the corner of the SS wasn't a dead bush, but some ammo, please make that more clear next time :/

Pss. I also forgot to say that the ammo UI always shows 1 ammo, even if the gun is fully loaded with 6 bullets (But when the gun is empty the UI is showing fine, with 0 bullets)

Lol thank you, the glitch has been sent to me by all of the playtesters and it cant be simply fixed .I would have to change a big part of the game to fix it. Also yeah i made the gun a little too weak. A good tactic to go for is empiying your mag to only have 6 bullets and shoot behind a structure. The enemies sight cone hitboxes had a weird hlitch so i had to remake it to be awkard (Sorry for that one). Yeah overall it was my first time making anything close to this + firstitme making AI. Stealth AI is really really hard to make and i made it really cheap. Thank you for the review and telling me all of its mistakes. I will learn from them and hopefully i will make a better gamejam game next time. (I will tell my composer that you  said his music was good :)    )

nice game the music didn't work for me for some reason.

A few notes: The enemies spotted me instantly and turned instantly it was very annoying when i would be close to an enemy almost gonna assassinate them and they would instantly turn and see me and almost kill me and when i ran away they still found me witch doesn't fit the idea of assassinating cuz they are clueless until they see and now they know exactly where i am.

Secondly the assassinating is E witch is annoying cuz i would try to run right but need to press E and it would just slow me down so instead i would suggest shift be dash and right click be assassinate so that i can run and assassinate faster, Also the assassination didn't work when i was like 2 pixels to far from the sprite so making the distance a little bigger.

lastly make the dash more satisfying. You could add particles and or sound effects, screen shakes im mad i for got to do a screen shake in mine it would have been much better, anyways the reason being you are going from a stand still to like 100mph and then stop so i want to feel that burst of energy, that fast of dash needs some power or else it feels anticlimactic and weak.

But good game, when the assassination worked it was cool i like that touch. Nice art i like it. GG! keep it up

Yeah i was in a rush so i forgot to put the music and walking sound into the tutorial level which i would guess you did not complete. Also thanks for the feedback on the mehanics. The backstab has to be the opposite of the their viewcone and not the sprites actual back.

Thank you for playing and for the feedback :)

Maybe it's just me, but I wish enemies lost sight of you after awhile. I wanted to go stealthy but always ended up being caught and having to restart.

Other than that, the art and music is pretty boppin and stealth kills are very satisfying.

Thank you for playing. Sadly the time was going thin but i was planning to add enemies losing sight afterawhile.

Submitted
Marmio, were is my Apple?
LikeReply
MegaFanZachSubmitted74 days ago

Ok, I tried it again with the knowledge of stealth killing. This was a much better experience.

Great game dude! The music is neat and awesome, the mechanics are simple but really cool, i like the speed and to ambush-stab the enemies.

I liked your game but seems like bullets aren't at all useful. Stealth kill is the only way to go. Enemies can also see beyond walls. So I started playing the ninja way. Loved that gameplay. Your sprites are also really great. Thanks for submitting your game! You can make a really good stealth game from this.

I would really appreciate it if you could take some time to rate my game as well. Thanks!

Yeah thank you. Fun fact: 80% of all my games are stealth games lol. Thank you for the review and i am happy you enjoyed the game and ill be sure to check out yours

I'm such a hypocrite, but why am I stuck on the tutorial level? I feel the enemies have a little too much health. I did like what I played though.

There was a problem with the screen size.I tested it on a big ass monitor so the tutorial text was off screen. You gotta click "E" while behind the enemies to preform a stealthkill. Try replaying the game and rate again pls.

The game is so hard but I managed to get to second level where the music started playing.I find the movement speed depending on gun power interesting but the enemies projectiles were too fast to dodge.

Took me a bit to figure out the mechanics but I got there! The right click dash was a nice surprise.

Thank you for playing and rating :)

The enemies are way to hard to beat once they lock onto you, the only way I was able to fully beat levels was doing the stealth stuff.  Imo the stealth stuff was much more fun so I would have made your gameplay centered more around that.

The art style gave me nuclear throne vibes, I liked it alot.

Haha tnx, if you look at the bullets they are straight ripped from nuclear throne :P

Yes i might have made them a little too op but yeah the game is supouse to be played stealthfully.