This is a game made for benbonk2 gamejam with the theme limited space
Submitted by HK-Studio — 3 hours, 46 seconds before the deadline
Add to collection 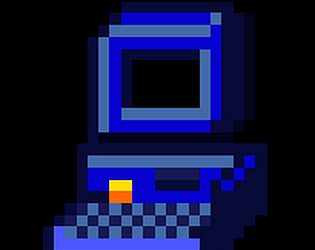 Definitely a cool concept, a little hard, but I liked it! Also, perhaps rely on a next button to move forward rather than a set time.

IDK if I just really like this kind of challenging game but I thought it was really good and I replayed the levels over and over to try to beat them. The art is good too. Id like if you could press r to restart. But fact that you are three weeks into your gamedev journey this is really good.

Dawg, this game be impossible

The concept is pretty interesting and creative but the excecution and the graphics affect it, the game is really hard with no real explanation (which isn't that huge of a deal but it would be nice) and most if not all leves have only 1 way to beat them making you have to try and try until you find it, with no real satisfaction or revelation, it's just "oh, i had to do this thing i didn't knew i could" and it's pretty annoying, then the art is sometimes decent and sometimes plain old bad, the pixel size is inconsisntent and it looks blurry. But aside from that, the idea was pretty cool and the story was kinda funny, i'm even surprised with the fact that you managed to make a cutscene, and for only 3 weeks of game dev it's fantastic, well done.

I have some feedback to you:

- There should be coyote/ Just in time jump.

- There should be a way to quick restart the level.

- This game is too punishing. If you make one mistake, you need to restart.

I really liked the concept of the game, I had fun with it, but the execution of the idea ends up harming the experience.

The first few levels propose an interesting experience, but as soon as cycling enemies are introduced, the experience starts going downhill. Since you can’t see these enemies, you just have to hope they are in the right place, because sometimes it’s impossible to go past them optimally. Other levels also have leaps of faith, where you will have to jump down a big hole without knowing what is at the bottom, which often ends up in dying. The lack of coyote jumping also makes some jumps annoying. It would have been nice if I could restart the level by pressing Space. And finally, on Firefox, whenever I press the Spacebar, the website scrolls down, making it impossible to play, I had to switch to Chrome to be able to play it.

This game was very hard. Couldn't get past the first level.

The game itself could be improved, but the implementation of the theme was nice and it could be explored further.

Super cool use of the theme and funny story/idea. Too challenging for me though :'D

Congratulation on the game.

Hey! Here is my feedback!

Art:
The art looks blurry (Set the filter to point)
Text is blurry (Use TextMeshPro)
I like the concept of adventuring through video games but you should make all the art the same resolution in everything. For example (if you had more time) you could make it so that in the Mario level your player's sprite changes to fit the Mario style better.

Gameplay:
The idea is nice! But I would add a bit more space per level, so that you have a bit more options on what to do.
Dying at the end of the longer levels is really annoying.

Theme:
Love the way you implemented the theme.

Overall it's a pretty nice game! Especially since you've only been developing for 3 weeks! Good luck in your next jam!

(If you could check out my game that would be great! :D)

cool game, would like to see more levels in the future

Great game! Gameplay could be improved upon, but overall it looks nice and sounds nice.

Please consider rating and commenting on my game too!

i will play it as possible

This game looks great, but I couldnt play it because pressing space would scroll down my page, and their was no download option available.

For 3 weeks of game development. Its really good. Liked the mechanic and how you used the theme

Some things you should know as a new game developer:

Do NOT use the built-in text pipeline. Use TextMeshPro, Which can be accesed by right-clicking in the inspector and adding a "Text (TMP)" object.

The blurry images when importing pixelart can be fixed by going into the import settings for the sprite and turning the filter (by default it is "Bilinear") to "Point" and setting Compression to "None".

I wish you luck on your gamedev journey!