Diaspora
The first edition of Diaspora, signed for the 2013 Bundle of Fate
vsca
Sand Dogs
Find the Soft Horizon on a dieselpunk plane of lost gods, scarce water, and Mercedes armoured cars.
vsca
Soft Horizon SRD
The underlying system for all Soft Horizon games. Free!
vsca
Callisto
Played entirely by email, send in-character mail to other influencers to change the world. Highly re-skinnable.
vsca
Hollowpoint
bad people killing bad people for bad reasons
vsca
The King Machine
The King is always perfect because of The Machine. But today The Machine is broken and the king is the wrong king.
vsca

itch.io Community » Tabletop Gaming » General » Discussion · Posted in Tell Me About Your Character
vsca1 year ago

FACT: Colonel Darros is my mentor and my idol.

FACT: I would do anything to keep Matridian Belkas on Demeter safe.

FACT: I would trust Markella with any secret

FACT: My wealth is tied up in other peoples’ debts to me all over the cluster

Everyone is totally, perfectly free here. Free to starve, free to suffocate, free to get radiation sickness and die of cancer. So you’re really slave to the labour you need to do to not starve, suffocate, or slough off your aviolae. At 11 I thought it’d be smart to specialize in fixing things that people need and chose to apprentice under an air systems team. Keeping the near-surface pockets of the Borealis moon breathing. That meant frequent trips to the surface and near orbit to mine gases. And that meant frequently standing in an armoured suit staring up at Borealis proper — that fierce warm glowing giant world that dominates half the sky with swirling blue and gold. And that made me want to fly.

It was Colonel Darros, an enormous Diver, who got me past orbit. He flew deep missions into Borealis to recover heavy gases and even suspended metal fogs. It was dangerous and exciting and it meant I had to learn to fly singleships from the surface of our Moon through complex orbital obstacles, and into the great storms. It was exacting, exciting, unforgiving work. But it wasn’t what I meant by flying. I wanted other stars. He had ideas along those lines as well. Dangerous ideas.

I fled with Markella in our stolen inspection ship and her crew (which we froze) to Demeter because I’d never seen free standing water under an uncovered sky. We ditched the ship — they were looking for it — in orbit and went our separate ways. A stranger in a place with rules and comfort and everywhere excess, I spent some time just trying to get by while at the same time dazzled by what a world should be. Matridian Belkas took me under her wing, got me work, hid me from the law, and got me papers. I had to run more than once and I had to kill once I’m sure of. My papers are no good any more but there is so much space to hide in on a real world.

I would eventually meet up with Markella again in an Antoinean prison. It wasn’t so bad. There was more air, food, water, and less radiation than I had at home on Borealis. In fact it was pretty cushy. But she wasn’t in jail — she was my lawyer and got me off on a technicality that probably cost her a lot of cachet in the system. And then I was stuck on Antoine which I hated until we both discovered one of the lesser worlds in the system, where there were more like-minded individuals. Some needed Markella’s legal help. Some needed a good pilot and a quick knife.

From the VSCA blog with thanks to Juan Ochoa.

I've been through it many times. By the time we get here everything is pretty much how I want it, I'm just checking that the cover worked as intended and the PDF prints everything correctly. Which it rarely doesn't once you get a handle on the expected input for your POD partner.

So, output print standard PDF (InDesign has a preset that works great), use the Lulu tool to get sizing info for the cover, re-jigger the cover and submit both it and the PDF. The software at Lulu validates it and makes it available to buy proofs. Buy and wait.

Then I redline the proof and decide, if there are any edits, how much I care. :D

DTRPG POD is similar but with more waiting.

Reply
itch.io Community » Tabletop Gaming » General » Theory · Replied to Four-in-Hand Games in What Are Your Game's Politics?
vsca1 year ago

This is specific to my most recent work, which is the Soft Horizon series. It comes out of the house system and the reasons why the system is the way it is.

Building up a community benefits you more than tearing it down

Everything worth doing carries risk

Oppression gives you no choice but to resist

I would hold up Fiasco as the (rare) example of a game that mechanically creates plot and does so from the improvisation of the players -- and consequently lacks rails. It creates a very reliable story structure without forcing the specific story.

Role-play in a Heavy Metal-esque desert reminiscent of Indiana Jones crossed with Roadside Picninc and server up by Moebius.

It’s hot, it’s dirty, and there’s dust on the horizon that probably means someone else found out about this Tomb before you. You’ll get there first -- your armoured car is fast, rigged for the hard-packed sand -- but they are coming with more people and...is that a biplane?

No matter; if worst comes to worst you have a way out. The hairy spindle you found at the last tomb has a useful side effect: it shifts you sideways through space to somewhere...else. But where?

It has to be pretty bad to want to find out.

While not technically released yet, itch and Lulu get a head start on SAND DOGS!

Hardcopy can be had through Lulu -- if you buy the hardcopy I'll ship you the digital for free. 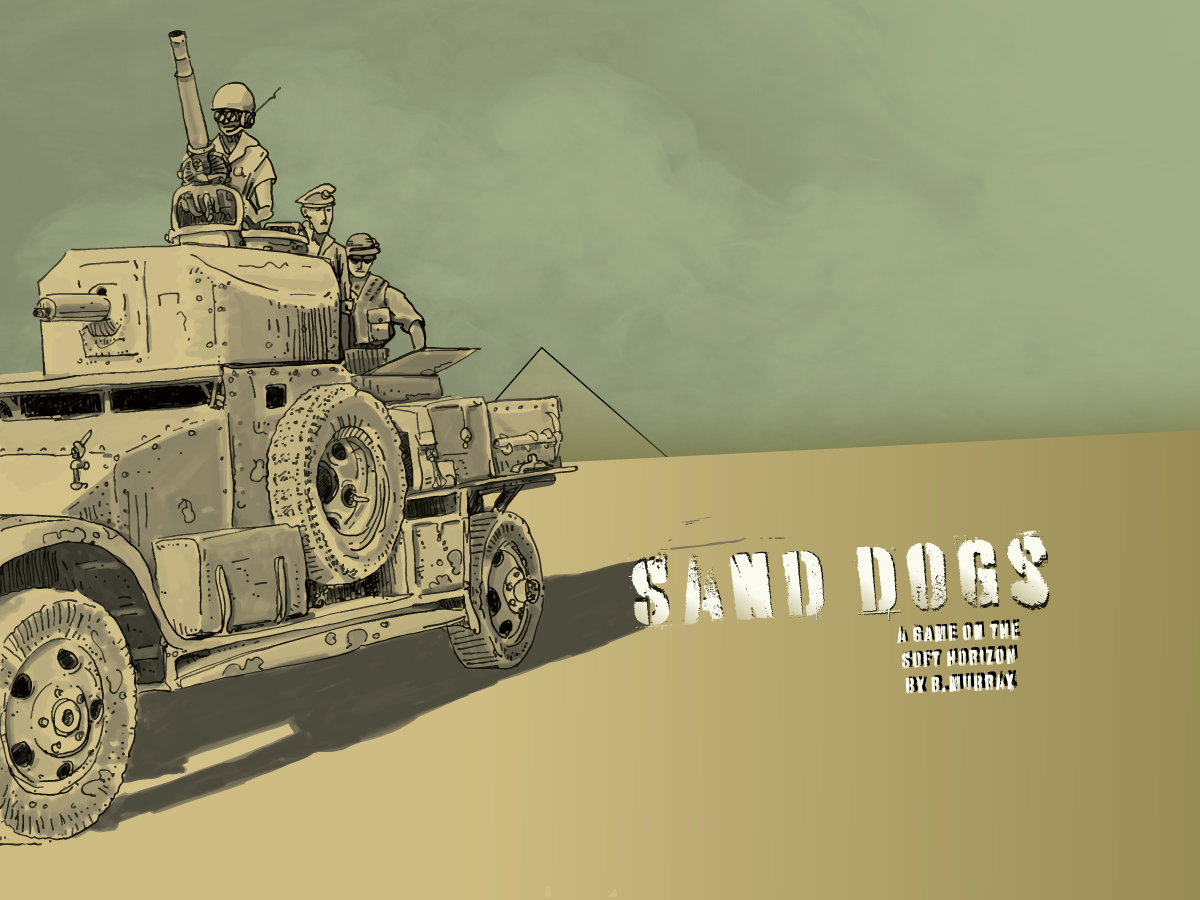 I wrote a little piece today about working with the artist Juan Ochoa. If you're looking for someone to claw the images out of your head and get them on paper for you, check him out.

Just going to review these and if everything is up to snuff...release! Fly my pretties, fly! 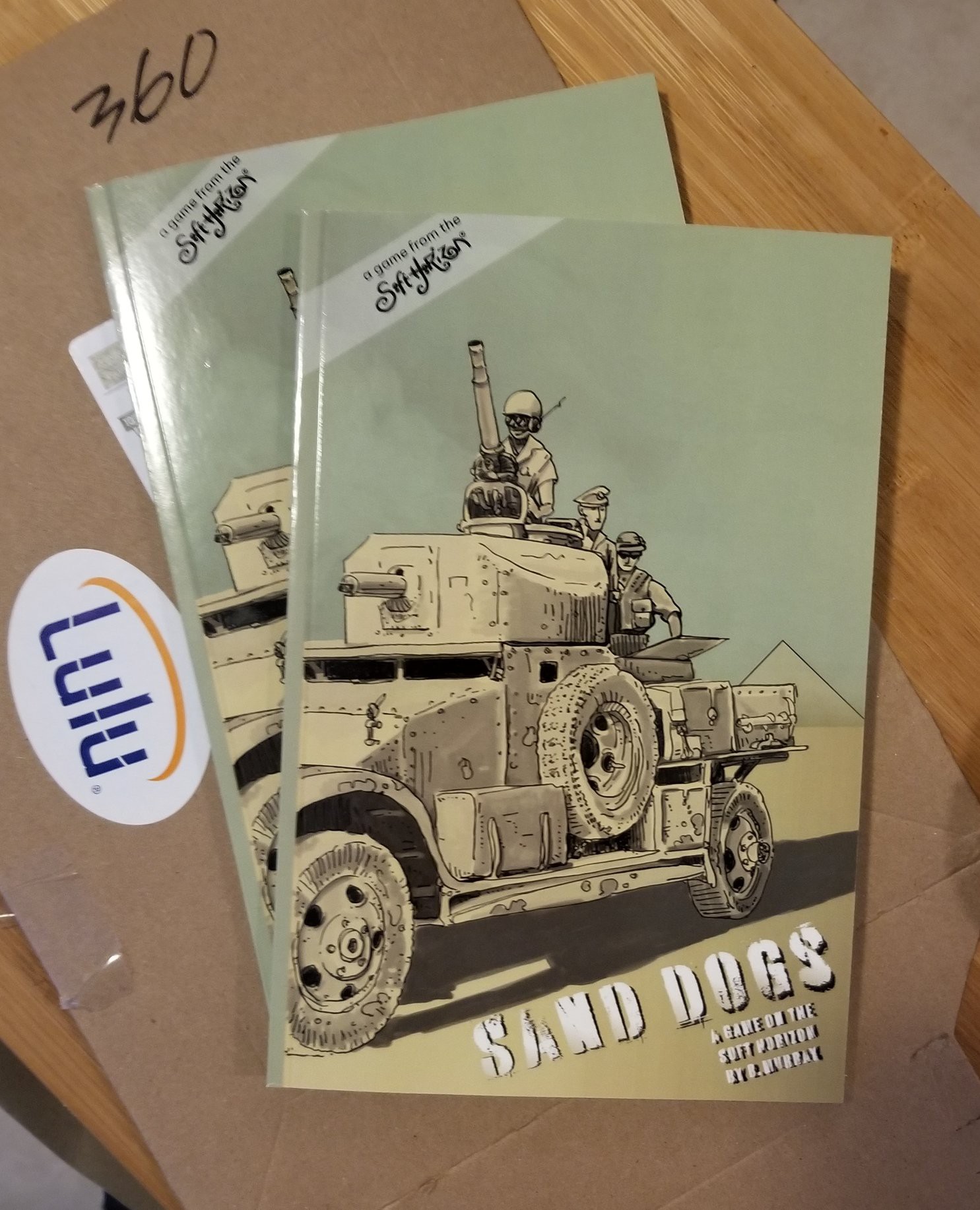 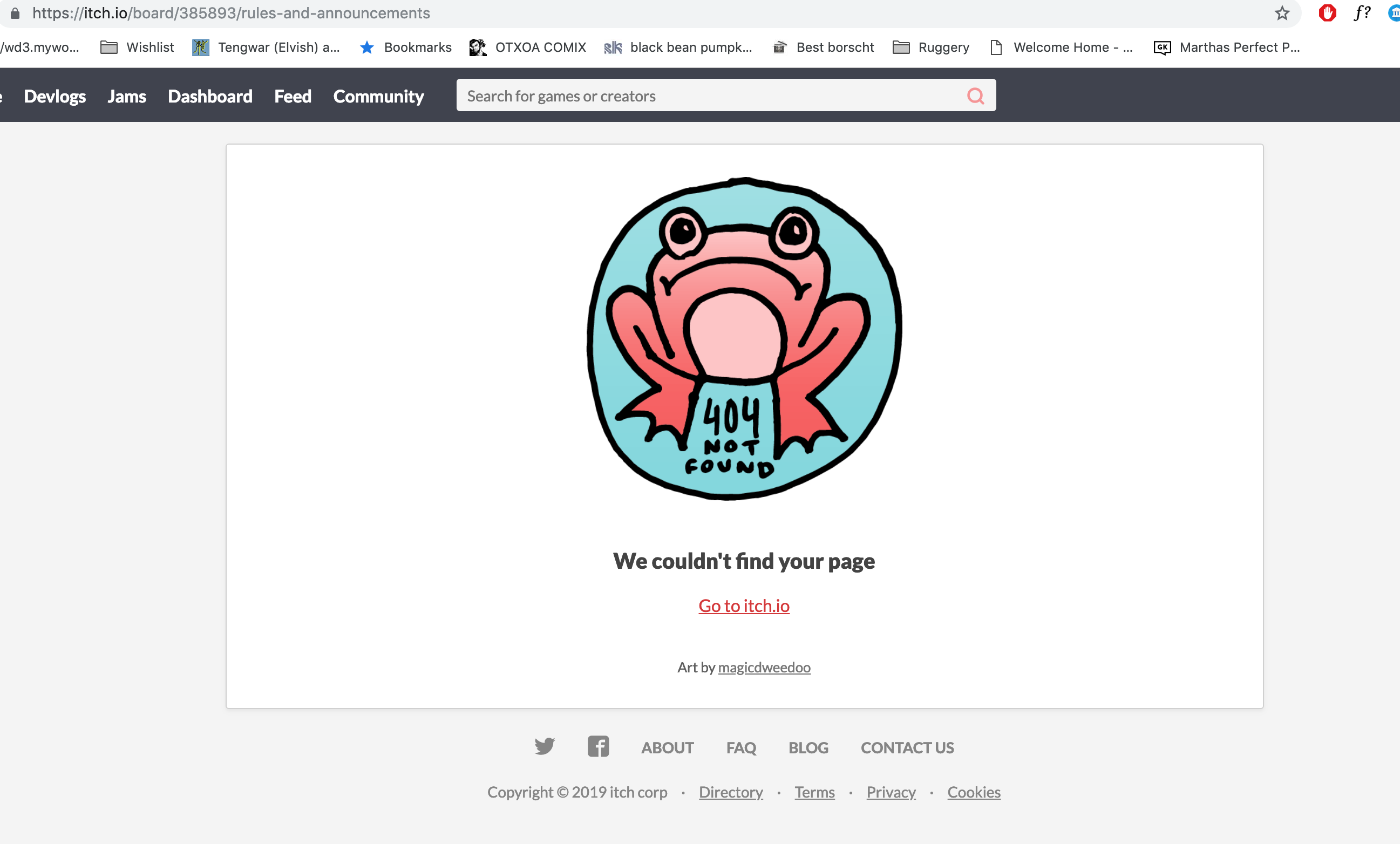 Still. It would be really nice to see the code of conduct.

A while ago I wrote about a technique I call scaffolding which is consistently powerful for my own work. It might help others.

The design keyword at my blog has other ideas as well.

A role-playing game of flying mountains and intelligent non-human primates.

The King Machine is the first Soft Horizon game, a series that leans into the style of early Heavy Metal comics. The system is designed for light extended play -- not a lot to learn, a short cheat sheet, but durable enough for campaign play. This first game focuses on a plane of flying mountains populated by intelligent non-human primates. Until just before the start of play, the world was a utopia -- a perfect king selected by machine. But now the machine is broken and the king is the wrong king. And now it becomes clear that although things are bad now, maybe it wasn't a utopia for everyone before either.

Brad Murray of the VSCA. I prefer "he" but won't balk at "they".

I've been playing role-playing games since around 1977 when I took over reffing from my friend's mother.

In 2009 we published Diaspora, which you may have heard of. In 2011 we published Hollowpoint which you might not have (even though it was nominated for Best Game ENnie in 2012!). Last year we published two new titles and this year I'm going to try to get out three. Currently I'm grooving on a distant cousin of both Apocalypse World and Blades in the Dark for a house system that satisfies my own needs first. I've always figured, though, that I'm not unique.

I publish on Lulu and DTRPG but have brought several titles to itch to see what's what. Impressed so far!

I am @BradJMurray on Twitter and some Atholl (VSCA, he/him)#0864 on discord.

The Hives supply the energy required.

Reply
itch.io Community » Tabletop Gaming » General » Discussion · Posted in When is the last time you used a forum?
vsca1 year ago

I'm still a regular user of RPG.net and a new user at the Gauntlet forums. There was a time I stopped using them -- mostly while G+ was peaking -- but they fill that hole again.

I like drilling into an existing system and finding the core of it that I like and then buiding back up. This lets me build a system that does exactly what I need and I have special needs -- certain anxieties while reffing a game and smooth playability in text chat. So my system, which borrows heavily from others, does exactly those things.

Ahah that explains the problem -- I see no connect widget.

One minor thing perhaps, but it would be great if the representative image for the title could be the shape of a book instead of the shape of a computer monitor. As an option, I mean.

Warehousing wouldn't be the right way to proceed. Instead a partnership with someone that does print on demand would be appropriate -- a place that does just-in-time printing and shipping.

Yeah this would really seal the deal. A partnership with Lulu or Lightning Source would be awesome.

My professional life revolves around securing safety-critical control systems. As me anything!

Just joined to add some distribution points to my tabletop games and so far I've brought over three VSCA titles for sale here.

Callisto, a play-by-email role-playing game in which players can only act by writing letters to each other.

Hollowpoint, an action rpg that emulates the comic style of 100 Bullets in a short one-shot format.

The King Machine, our latest role-playing game designed for online play and low stress for the ref. This is the beginning of a series of games, all sort of Heavy Metal style psychedelic fantasy. In this one you play an intelligent ape struggling with the fact that the king is the wrong king.