Good, but sounds a little bit too calm and upbeat for a fight theme (specifically in the first 40 seconds and the last 40 seconds).

The way the picture theme is used here is certainly rather interesting. I like the lore you wrote for this. Both tracks do a good job setting an overall dark tone.

No, it saves just fine. The problem is that it tells me to install something called "DirectPlay" whenever I launch it. It plays just fine if I don't install it, but it's still pretty weird. Here's an image of what I'm talking about: 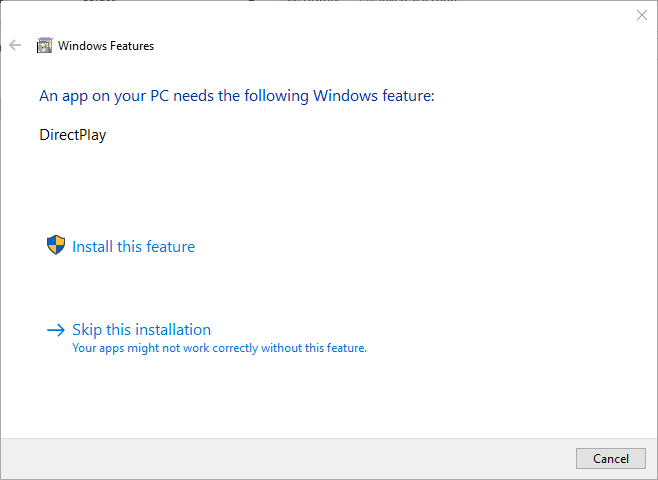 Thanks, I was in a bit of a rush since I didn't do alot on the first day so I skipped over a lot of details.

oh sorry I forgot about that

I suppose that makes sense, although you could've made the sounds yourself

Interesting game, really do wish there was sound.

Thanks, I actually thought about tiling the texture when I put it onto the terrain but I never got around it.

Oh that's strange as that doesn't happen on my end.  Try running the prerequisites installer, it's in Engine>Extras>Redist>en-us, and see if that problem goes away.

No offense but this game is pretty meh. The gameplay isn't particularly amazing, and the use of the theme is pretty bland as it essentially since it's just about killing some enemies that walk around a road before they reach the base you're protecting. This essentially just amounts to a tower defense game that plays like a bland top-down shooter game. Sound design is alright, and the sprites are pretty good, however the player sprite rotates in a weird way when you move horizontally. It rotates by 90 degrees when this happens, which looks incredibly strange with the 2D RPG-style sprites the game uses.

Wow this game is really good. The position of the window changing the position of the camera is a really cool twist and adds a lot of strategy to the game. The enemy AI also isn't half-bad, and it was fun to strategies ways to kill them. I did, however, frequently had a problem with the windows task bar obscuring the bottom part of the game area, which made the game occasionally wonky to play, however it didn't ruin the experience. By the way, I think the way the camera moved in the jam version was just fine, and imo the changes to it in the post-jam version  a lot worse as it means that the window also being the camera doesn't really matter. The speed increase in the post-jam version was really good though, as the original did feel a little slow.

Really cool game. Makes you think strategically about what you build. The sprites are also pretty nice and the sound effects are a nice touch. The controls were a little awkward though, wish it used mouse controls instead.

edit: ok cool it's there now.

This game is really good. The 8 game modes are each unique and provide a different way to play the game. There is also a lot of polish, and it's especially nice that the game saves high scores and game mode progress. Only complaint is that I wish the movement was more like the actual asteroids where you can freely move around. Also, it's pretty weird that the game says it requires something to be installed when opening it up, and you also can't close it once it's open unless you use the in-game exit button or end it via task manager.

The game is pretty fun, has a pretty nice art style and is overall pretty well polished. However, there was a strange scenario where the game would start lagging immensely once there were around a dozen asteroids on screen.

This game is kinda neat, and definitely seems to had have quite a bit of effort put into it. The sprites also aren't half- bad either. However, the game is pretty confusing and hard to grasp, especially since there is no visual or auditory response for any actions done. The Carrier also doesn't do anything at all, which caused several minutes of confusion trying to figure out what it does. It would help if there was an in-game tutorial to help teach the mechanics. I also don't know weather this was intentional or not but most of the time the AI in this game make nothing but miners, even when they are being attacked. The music also gets pretty unbearable after playing for a couple of minutes.

I'm gonna be honest, this game can be improved quite a bit. You get way too little money for each kill, which means upgrades come very slowly, and repairing your ship can easily take out most of what you get each level. This can be especially annoying since often the bullet patterns put you into a situation where you simply have to get hit. The dash isn't very helpful with this, since it just pushes you into a certain direction. It would be much more helpful if the dash was replaced with a teleport, which instantly moved you a short distance ahead of where you're moving. It can also be really hard to actually hit some enemies, as some of them move 1 to 1 with your vertical position, which means that if you try to dodge their bullets they will just instantly follow your movement, dodging any bullets you were sending to them. The lack of sound also kinda sucks, but isn't really too big of a deal. The sprites are pretty good though, and the fact that there is an upgrade system at all is kinda impressive considering the time constraints.

the game is nicely executed and has lots of polished, however I think it could use some more movement options

Thanks, but i didn't make the bubble gun

oh yeah, i never was able to test the browser version since it just kept giving me errors, so I removed it.  That version was also using WebGL (which I believe is equivalent to an old version of OpenGL) rather than DirectX on the Windows version, so that probably disabled some features i was using 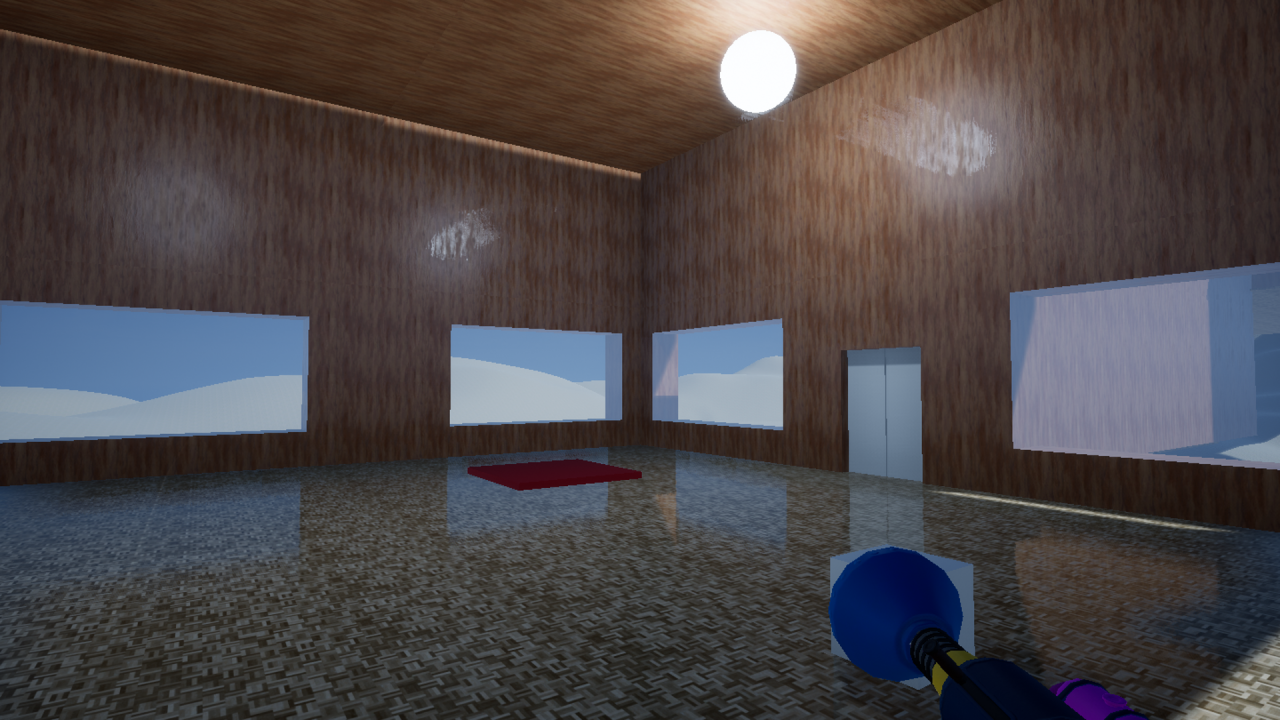 You downloaded this from the game page, correct?

Gameplay is cool but the jump key being W rather than Space feels very unnatural. Also the timing for jumping off the bubbles feels a bit off, especially since you go right through them rather than landing on top of them.

Interesting gameplay, I really like how new enemies and mechanics are introduced by showing how they work in an enclosed or safe environment. However, it is a little annoying that you have to spam left click in order to move around anywhere, especially since you need to reposition yourself often since when shooting bubbles near a wall the bubbles instantly pop.

The gameplay is a little simple but the paper aesthetic looks really nice and the sound effects fit very well.

This game is very good with great gameplay, art, sound, and music.

Really cool game with very well thought out mechanics and really nice art. Only problem is that there's no sound

reloading is rather annoying though, since you have to constantly spam r, which is rather clunky when trying to focus on fighting enemies. i think what would work better is making it so that whenever you press r your ammo constantly reloads without you pressing it, however you can't shoot while do so and you would also be slower. perhaps there could also be a bonus for reloading as little as possible

the score system is also not very good, with it mostly being based on pure luck on how many enemies spawn rather than skill. this could be improved by having it where you gain extra points the less damage you take, as well as the time you take to complete the level.

something that i think would also be cool is if the game had more rogue like elements, with items you can find and with bigger floors that you progress through by going to exits rather than by eliminating every enemy.

The atmosphere in this game is pretty good, and it looks pretty nice visually. It's really annoying how the camera isn't centered on the jellyfish though.

The Shark AI is also pretty weird. They seem to move incredibly fast, with no way to know if one is nearby outside the screen bounds, and there's also always one shark following you. I think it would've been better if the sharks had instead been able to loose track of you and stop chasing, and would also react to movement. It would also be better if the sharks had some kind of movement pattern that they do when not chasing you. Considering the theme, having audio cues help you figure out where the sharks are would also help improve them.

The light mechanic also doesn't work really well, since you can see sharks and food perfectly fine without it, and it just doesn't feel all the great to use. I think having it where instead the light increased in brightness rather than sized would've been much better.

This game is really fun and polished and makes great use of the theme. It also has a really nice atmosphere and visual style, although the menus buttons look quite inconstant compared with the rest of the game. The game's difficulty curve is not that great though, with the 2nd level being way more difficult compared to the first, and I find it pretty annoying that I can't aim my bullets wherever I want.

This is a rather cool take on tetris, and uses the theme in a fun and interesting way. There is a huge lack of polish though, with bland graphics and it's lack of sound.

this game doesn't really fit the theme very well, and the gameplay is rather simple and bland, which isn't exactly helped by the lack of sound and uninteresting visuals, although I guess it does kinda make sense considering how it was made in only one hour like you said.

This game has pretty great atmosphere, but it's rather annoying how limited the movement it, and I wish the game had a proper end rather than just dying.

neat idea, I liked how there are multiple queues that you have to be aware of to figure out who's a vampire. The music is pretty good too. It doesn't look very good visually though, and it doesn't really fit the theme (although you do say that you do have limited visibility, so it might be a bug). The game could also use a scoring system that is based on your human to vampire kill ratio rather than accuracy.

thanks, btw you're supposed to pick up the yellow cubes to bring up your fov.

That was kinda what i wanted to happen, although i probably made it too hard seeing as how it happened in all of the previous jams I've joined.

that's actually what they do, maybe I made the effect too weak?