channel your inner jelly
Submitted by annoyedCactus — 3 hours, 23 minutes before the deadline
Add to collection 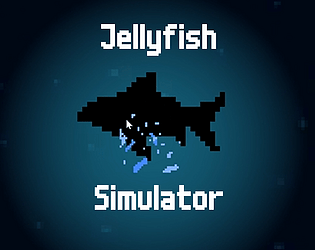 The atmosphere in this game is pretty good, and it looks pretty nice visually. It's really annoying how the camera isn't centered on the jellyfish though.

The Shark AI is also pretty weird. They seem to move incredibly fast, with no way to know if one is nearby outside the screen bounds, and there's also always one shark following you. I think it would've been better if the sharks had instead been able to loose track of you and stop chasing, and would also react to movement. It would also be better if the sharks had some kind of movement pattern that they do when not chasing you. Considering the theme, having audio cues help you figure out where the sharks are would also help improve them.

The light mechanic also doesn't work really well, since you can see sharks and food perfectly fine without it, and it just doesn't feel all the great to use. I think having it where instead the light increased in brightness rather than sized would've been much better.

really enjoyable game, although i am a bit biased. the one little issue i'm having is the sudden deceleration when collecting food. other than that, great game.

Nice looking and atmospheric game!  In terms of gameplay mechanics it's a bit limited, as all I could think of was either move around in the dark and hope I run into food, or turn on the light and  hope no shark comes.

I like the mood that it sets! The music is good, the shark adds an extra layer of fear, and the food feels rewarding to grab, especially since it's so hard to see outside your little light circle.
Nice game overall! Maybe it could do with a couple more mechanics, but I don't really mind it as it is!

The idea was good. Unfortunately the UI doesn't explain itself. I figured out that the left of the two bars is the light-range and the right has something to do with the food. The Feature with the light increasing and decreasing is really cool, but completely unnecessary for the current gameplay. (you can just farm food with minimum light all the time). The Graphics are pretty neat.

The UI lacks some clarity, but the audio and visual design was pretty nice. Sharks kill you with lightning speed, so you cant really dodge them.

Submitted
Lost In The Forest
LikeReply
JK5000Submitted1 year ago

Overall is this a simple and really fun little game. The best part of this game is the scary atmosphere.  Both the music and the visual style is pretty good in this game. The sharks i way too fast and is therefor super difficult to avoid. The bars in left corner needs some symbols or text to show what they are. But overall a good jam game. Well done.

Submitted
A Blind Man´s Walk Through A Dragons Cave
LikeReply