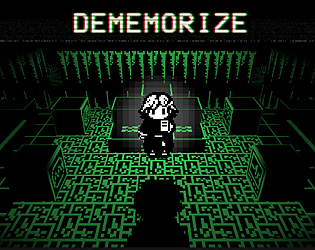 This had me invested 'til the very end... very good job overall! The story was interesting and was presented in a way that kept me interested throughout the whole experience. The 1-bit graphic style and glitch shaders really conveyed the unsettling mood.

A couple minor bugs and funky controls, I got a bit stuck after reading the note right before the control room button and couldn't move forward or backward (unless I held both W and UP ARROW).

All in all, probably my favourite game of the jam!

A great piece of work! The shifts in perspectives and art styles were fantastic. Music and sound was excellent, during the night there was real RE4 energy, put me on edge. Overall there were a couple or more MOMENTS that I'll be thinking about for a long time

I really enjoyed the characters in this game, and they feel really well developed. The game made me feel a sense of dread (in a good way), and I appreciate the aesthetics a lot! I should let you know, I did encounter a couple glitches with Lia when she's following behind you (she would float), but nothing that hurts the experience. Very sublime!

The art design was superb, the sound is really atmospheric! The characters are charming and well realized, and the story is deep and dark, made me feel like I was watching an anime or something like that.

Great choice of colors and the whole concept of playing with the mind is such a fun one. Kudos!

This game is really well done, down to the little things. The story is very intriguing and I think the 2D-3D combination adds to the overall atmosphere of the game. Controls are also really intuitive and I didn't really run into any problems. Great job!

There is an impressive amount of story in this game! I'm surprised how much there is for a game jam game! After beating it I really wanted to discuss the story somewhere, but then I realized that this was, sadly, still a game jam game.

The perspective shift was also used really well, building a lot of suspense during the night sequences. I appreciate the art style a lot as well. Our game actually uses the 2.5 style too, but not as stylized as this. Great work on the game!

By the way, there was a note in the examination room during day 4 that I couldn't interact with. Was there any way to interact with it earlier? Or was it glitched?

Edit: SPOILERS but I noticed a certain character following me around every night. At first I thought it was a glitch but after finishing the game it makes a lot more sense that it isn't. Really nice touch there!

Ahh glad you enjoyed it. That last note isn't interactable due to a bug (trying to get a bugfix build out asap) but just has some extremely minor notes on Dr. Cooper.

Can only agree wtih others - amazing game! I  was sucked into story from the begining.  Characters and dialogs are just great. Thanks for JUMP option in mein menu, it was crashed by me once :D

Artstyle is very well done too.
have not stucked with moving problems like other people here -> so its fine, at least for me :)

Thanks for such a great experience and story!

PS: was very upset about Connie...
PSPS: You could try our game too :-)

Amazing the quality and duration of this game. I really liked the difference in atmosphere between day and night and the fact that at night it is played in first person. The sound fits especially well at night. And the story is super interesting and the dialogues are very well done. It is one of the games that I have enjoyed the most so far.  Excellent work!

Submitted
There are more things
LikeReply
GreggoSubmitted86 days ago

That was dope! The amount of dialogue and story is impressive for a game jam. I really enjoyed playing, and loved the switch in point of view for the nights, I thought that was a great way to break it up and add a completely different way of viewing the same space. Definitely want to play more stuff by you.

I wish I knew what the hell was going on, but definitely an enjoyable experience overall!

Woah, this was different!

This is definitely one of the best entries I have seen so far! As well, this is currently the only entry I’ve played that is a full-length game! I was super intrigued into the story and, beyond a handful of bugs, this felt exceptionally well polished!

Your great care, experience, and love with this title shows and I can assure you players can feel it!

Seriously good job on this! You have also managed to earn a 5/5 out of me on Enjoyment and Aesthetics! Congrats!

An absolute gem of a game, not just in the context of the jam, but in general!

Only issue I had was the walk speed, but the story was interesting enough to not be a huge problem.

Wow the amount of dialogue & story content is just astounding! I also like the visual style you went with, the dialogue switching was neat and the perspective change was a fresh break from the top-down exploration. Some minor changes or additions could be to add sprint to navigate the areas much faster. However, I found that pressing WASD and Directional Keys at the same time would add up to the total move speed so that bug somehow seemed like a solution. Also the HTML5 version of the game was laggy for me, not sure what was causing it, so I gladly played the PC version.

Really impressive to see a game with an hour of content in a jam, while also keeping me interested the entire time. I loved having the perspective switch at night because it made the experience much more surreal. The characters were also unique and each had their own backstory which helped make the world and situation they're living in feel so real.

I'm really glad you guys enjoyed this game and glad to be a part of it!

Wow! I really enjoyed this one. Probably my favorite so far. I really like the use of pixel art in a 3d game. And the story was very interesting. I liked the ending until the very last part. That made me a bit confused. There were a few areas where the flashing lights made it frustrating to see and I just had to wait until they were bright again to keep going. Other than that I really enjoyed playing this amazing game!
Some bugs I found:
During the last chapter after listening to Joey I listened to the other character and the game froze. Re-opening the game and resuming from the last chapter the name I chose was gone. Speaking to Nadine twice during the last chapter will add d5_nadine to the bottom of the text and push the text upward out of the textbox.

Submitted
Stranger In The Night
LikeReply
psy_wombatsDeveloper87 days ago

Glad you enjoyed it, thanks for the bug report.

Amazing game! I love the style and the story is quite interesting aswell!

Submitted
Rise of the UNBREAD
LikeReply
Gyarmati ZsoltSubmitted88 days ago

I really liked the style of this game and the text animations. Well done!