Descend a mountain by spinning the entire world instead!
Submitted by Jarrett Ang — 8 hours, 35 minutes before the deadline
Add to collection

Wow, this is great! Reminds me a bit of Super Monkey Ball, lol. Great job!

Thanks for playing, I'm glad you liked the game! Super Monkey Ball looks like a fun game, so it's great that this game reminds you of that.

I don't know what to say. This is great! Just tell me: How many tries did you need to record that jump in the gameplay?? I nearly didn't even manage to collect one point and you just jump over an abyss... (and you reached 24 points in screenshots..... oof)

Okay so this will be my very first 5 star rating in all categories because really EVERYTHING just fits.

Yes, using premade assets is kind of cheaty but mentioned that the paths and props are randomly generated (is that so?) which means that the models must be put together with a really smart algorithm and I think, that is a huge part of aesthetics. I mentioned that by INTENTIONALLY falling down hundreds of times ;)

Sometimes it was a bit hard to understand where the ball will roll to but this may be a point of perspective of a 2D-screen. And somehow this gives the whole game just a little rage-factor which I like

Wow! Thank you for playing and I'm glad you enjoyed the game! Tbh, since I've played this game for almost 6 hours total while play testing, I've gotten pretty used to it. The jump in the gameplay gif was part of my first recorded run (I decided to use that jump part cause I thought it looked cool).

Also yes, the level is randomly generated and the algorithm it uses is pretty basic. The level can be broken up into "pieces", like Lego pieces. Here's an example of one type of piece prefabs I call "DownLeftTurn", 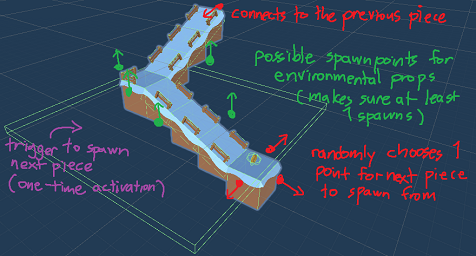 The game chooses a random piece to spawn next and connects it to the previous piece at one of the bottom red nodes (And this basically forms the string of pieces you see in the game). On the other hand, the prop spawning uses a separate system, it spawns a random number of random props at predetermined points on the piece.

Something small but, the sun in the game points directly down, so you can to use the shadow to kind of gauge your current rotation.

That is actually a little more basic than it appears to be. So the tile distribution must be well done. Nice drawing btw.

Ok this is amazing, really beautiful art, and a really cool idea; I'd love to see people speedrunning it etc!

However for me, down arrow and left arrow do the exact same thing, while up arrow and right arrow are opposites, which isn't how the tutorial made it sound! Also I feel like having the proper game start when you roll off the menu island has downsides; I rolled off it accidentally when I had no idea what I was doing lol, and then the full game started and I was like 'oh no!'

Thanks for playing! That's weird, I've just tested the web and windows version and the arrow keys work the same as WASD, so I'm stumped on what's causing that issue. Also this game is evil and tests new players' abilities unexpectedly through trial by fire. ha ha ha ha!

Very fun! Every time I played, I was able do a couple of cool saves (rolling ball on the underside of the platform anyone)

Thanks for playing! I'm glad you enjoyed the game! In the first version, the player would actually lose if they went on the underside but I decided to scrap that and allow the player roll on all sides, and I'm glad I did that.

This is a really cool game. The gameplay starts out hard, but eventually you get into a flow. The music is nice, but I feel like the ball hitting other objects doesn't really fit. Aside from that, the game is really great!

Thanks for playing! I'm glad you enjoyed yourself and managed to get into the flow. Yeah, I was getting desperate for time so I decided to reuse the same sound hit effect for everything. I'll probably take the time after the jam completely ends to find more appropriate hit sounds for the respective objects.

Cool! Let me know when you do that!

Great game! Initially, the game does seem a bit hard, but once you get the hang of how the camera works exactly, its relatively easier from then on. The game is very apt for the theme. Really enjoyed it, the game dev is definitely breathtaking.

Thanks for playing! I'm glad you enjoyed playing the game, it's reassuring to hear that the game does become easier over time. I need to think of a way to get players used to the camera control mechanic quicker.

Btw what do you mean by "the game dev is definitely breathtaking"?

I was just complimenting you by stating that you are awe-inspiring, since you were able to create such an amazing game with great visuals in such a short span of time. It was a reference to the Keanu Reeves incident at E3 last year where he was complimented to be a breathtaking person and he returned the compliment to the audience.

Thanks for the compliment, I really appreciate it! Although the visuals wouldn't have been as great without the MVPs Kenney assets and Unity PostFX.

your game is so good

Once you've spent the same amount of time on game development as I currently have, I'm sure you'll be equally good, if not better than me. So don't fret over it!

Fun and impressive game! Maybe a little bit too hard, but I guess that is the point.

I didn't intend the game to be this difficult so I tried adding things to make the game easier, like the fences in the snow area to act as guardrails. Although I guess this means once someone gets the hang of it, they'll feel extra rewarded?

Here are 3 things that makes this game exceptionally hard:

2) The controls are a little bit sluggish. Could be because I tried the web version.

3) There are not many coins to pick up, and you need a lot of motivation to keep on going.

I agree with you on the lack of coins. I'll have to remind myself to increase the coin amount and update this game after this jam competition completely ends.

No, you're really cool!~

On a more serious note, thanks for playing! I'm glad you enjoyed it.

Really cool game! It was surprising and very fun that camera can make 360 in all angles :)

Thanks! I'm glad you enjoyed it! Setting up the camera along with the mountain rotation based on the player's position and perspective was an absolute pain so it's good that my efforts weren't in vain.

Whoever made this really understands the principles of game design

seriously tho amazing job on the main menu that was epic!

I can't believe this was done in 3 days!

Thanks for your comment! One thing I learnt after completing this jam is that I suck at design. Thankfully, my saving grace was that I could playtest and refine with around 15 of my friends on the 2nd and 3rd day (The game was terrible to play when the first playtester tried).

The initial scope for this game was a lot bigger, with spike traps, more section types, an interactive tutorial level, etc.. But after participating in a few 3 day jams in the past, I knew that was impossible and decided to descope and use pre-made models and sprites to free up a day.

Now that I've slept for the longest time in the past 3 days, I'm excited to try all the games. I'll probably start with yours first.

Thank you! Your game is awesome and it looks like you are much better at design than you previously thought! I also fell victim to overscoping, but I was able to cut back in time. Every single jam I've ever done has been overscoped, so don't feel bad about it or else I'll have to :)

It's really impressive how fast you were able to make it, it feels complete during play!

I also just returned from my first slumber in 36 hours and I'm feeling myself again. I hope we can jam together sometime, and I'll rate yours first as well :)