Submittion for Scorespace Jam #8
Submitted by Briskled — 3 hours, 53 minutes before the deadline
Add to collection 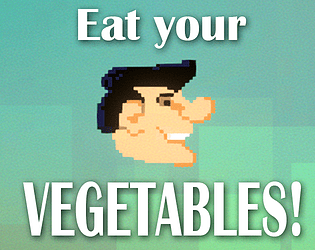 Nice design! Especially I liked the giant head. What I missed most was interesting enemies. And maybe you could add some obstacles?

Thanks for playing my game! There should be some knives flying around but yes. They are not very interesting :D

I am thinking about some obstacles or other shapes of the map for further versions. Implementing some "intelligent" enemies is another good point. Thanks!

Hilarious take on the theme! I gotta say I really liked the sound on this game. Small sounds on every action made it feel like every one had a real effect on gameplay and consequence and kept me engaged. I also managed to get on the leaderboard so there's that!

Mind if I asked how you did the leaderboard? It was really well executed and I didn't manage to make an online one for my game.

So about the leaderboard. I have a small raspberrypi at home running an apache2 server and mysql. The database contains just one table with name, score, date and id of course. The game thends a http requests to a php-file on my pi (something like /cmd=select&amount=20 for the best 20 players) which handles the mysql query and encodes the result as json. Looks like that: {"id":22,"name":"Munsi","score":9890,"date":"2020-04-06 20:37:10"}. And this is something which unity can understand :D.

Did not manage to create a safe encryption or authentication system but there are is sensitive or important data on my pi. If you are further interested, we can talk about more on discord?

Very good game.
I LOVED the way you displayed the manual and the easy drag to proceed mechanic..so, so so cool !
Concept is neat, and theme well exploited, not always easy but a good difficulty curve, soudn design is cool. Well done !

What can i say for this review except well done. This game was both charming and funny in its own unique way. This was the first jam game i found that made me laugh and admittedly i laughed quite a lot at some of the unexpected jokes and lines of comedy. I will try to cover it all in as much detail as possible for you. My review goes as follows:

Aesthetics, From the very moment i loaded up the game, i was already in love with the art style and direction, from the really nice colours to the beautiful complimentary font, font colour and bloom effects. The art was very well done and every bit of it made me smile seeing it. I also loved the animations that played to display your current health in a diegetic manner which is always interesting to see. It was also a nice subtle touch too to see the players name at the bottom left corner during the main menu.

Sound wise the music was nice and fit with the games overall theme and the sounds were responsive to the gameplay.

This game stuck to the theme of balance in a fun and interesting way and also promoted a message of moderation when eating, whether intentional or not. The leaderboard was also really well executed too! I did try to break it by inputting a second score however was happy to see that it didnt work and that the game remembered my previous highscore and as such never updated the table.

A small side note before talking about the gameplay is that i loved the game over screen quite a bit. It was a nice touch to add the various death messages, one of which being a nice call back to a Spongebob quote which is nice to see, but i was also very impressed with the quality of life edits such as the highscore button. When i clicked on the button i expected to be back on the main menu, so when i clicked back off of the highscore menu i would be back at the main menu but was pleasantly surprised when i realised i was still on the death screen

Going on to the gameplay, i felt it was fun, interesting and challenging, I did however have once slight issue with the gameplay, which was that the controls felt too slippery and the food often moved too fast. this meant that sometimes i would spend a while trying to eat one food because the player would either move not enough or too much when trying to collect it and would move too slow compared to the food in question. It is also worth noting that the level seemed to be premade rather than procedural, which is fine however when playing the second time i already knew where things like the muffin would be which i could imagine could get a little boring after a few attempts, i only played twice so i cant confirm on that however my suggestion would be to have either random spawns like you have when the game is on going or preset levels that randomly pick between each other so that the layout has the illusion of being random when in reality it isnt.

Overall a very well executed concept and if i didnt know better wouldnt even think this was a game jam game made in three or less days! It is very impressive just how much polish this game has and im glad i got to play it!

Thank you for that detailed feedback! I am happy to see that you appreciating the small details (especially that you noticed the spongebob reference :D)

I totally understand your critics on the gameplay however the spawns are actually random distributed within a rectangle. But still, some obstacles, a different shape map shape or a "smarter" random distribution of the spawns may be useful.

About the controls: I just played my own game again yesterday and came to exact the same conclusion!

So thanks again for your critics. It is very important for me to collect impressions of others to grow

You are welcome and I'm glad you appreciated the feedback. As you said we as developers don't know unless we are told what issues are present to both learn and improve.

Speaking of it would mean a ton if you would play and review my jam game. It's called Interstellar Balance and is a downloadable unity game for Windows pc.

Of course I will test your game. I planned to play, review and vote every single game. But I take my time for that to give detailed feedback, so just be patiently. My review will come ;)

Cool game! Sometimes the knives appeared too fast to be able to dodge them and they weren't very noticeable with the background, though. Maybe they could have something to tell them more apart like an outline or something else. I loved the theme and art!

Your game fits so well to the theme!!! Controls are pretty hard but after time it gets easier!!! My personal is 10415 points.

This is a very interesting game! 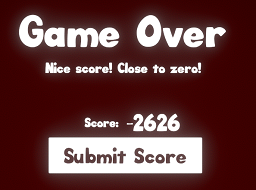 Please help, I can't get the game to recognize that -2626 is the superior score to save in the leader board compared to my inferior score of 5718

Thanks for making this game! I had fun playing it and I hope you had fun while making it!

Hey mate, thanks for your nice feedback!! I actually laughed loud out reading your comments :D

I am really happy that I could give you some funny moments with my small game!

P.S.: You cann drag with your mouse insdead of scrolling :P

Relates well to the theme, great visuals, sound and gameplay.

Probably my fav yet!

This is honestly so much fun to play with! How  about adding a character system so that the player can choose what they wanna be? that'd be epic! :D

Thank you! Definitely an idea to implement later!

A nice little game. I did find it hard to dodge the knives from time to time and would get overwhelmed. But loved the concept and overall execution.

I actually think, the knives are a little too fast :D Will change that later I guess

Submitted
Up, Up, and A-Weigh!
LikeReply