Submitted by Sakura — 22 hours, 30 minutes before the deadline
Add to collection 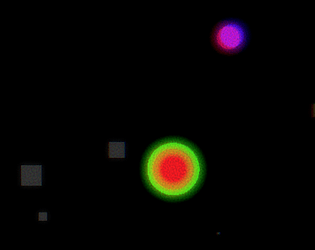 Very nice take on the theme. The game was extremely difficult for me though, I'm really bad with divided attention. Nice music. A good entry for sure, well done :)

Thank you very much! I appriciate it.

Interesting idea!  Balance is how you divide your attention between the 2 screens, I liked that unique take on the theme.

The aesthetics were on on par with what you could expect from a small time frame, clean and understandable

I had a few gripes with the game play, like how you ended up not being able to bounce high enough to be effective by the end of timer.

It was probably the most challenging entry I've played so far.  The game makes clear that is it difficult and I appreciated it!

Sound and music were a thumbs up from me!  :)

Thanks, I really appreciate it!

This was an interesting concept, my review of it is as follows:

The first impressions with the music was very high with praise. I was too busy grooving with the tune that i totally forgot i was even playing a game to begin with. However when i finally remembered i was suppose to be playing a game a few issues popped up which sadly caused me to mark the music down. The first was that upon clicking the options, the music would jump-cut back to the start of the track and restart. Having played more i realised this was for the whole game not just the main menu. My original suggestion was going to be to have the main menu as one scene that transitions to each options but if the intended effect was for the sound to play in the background and never change then my suggestion would have been adding a gameObject that never deletes when loading scenes so that the tune would never jump-cut when loading scenes but would keep playing from where it was when you clicked the next option. My other suggestion would have been to have multiple songs. Im sure due to time constraints that you likely wasnt able to make many tunes however i did feel i had to mark it down a point for this too since as much as i loved the overall tune, after hearing it for over 10 minutes on loop in gameplay it begun to get annoying to listen to, especially with the jump-cuts. alterations would have been nice because then it wouldnt get as repetitive as quick.

In terms of art, i loved the background for the main menu! I also liked how the ball would gain a green outline when it hits the green ball to show it has a powerup. I did feel that the main menu was lacking in transitions between menus rather than just popping to the new menu it would have been nice to see a transition between them such as the main menu going backwards and fading out into the void behind it.

In terms of the theme, i think it hit it rather well! however gameplay wise is where the issues come in.

Sometimes when the player put the purple ball through the platform, it wouldnt award points while other times it would which felt inconsistent. If the player was hit one too many times they would also lose the ability to jump high enough to do anything in which case lead to the player being stuck in a situation where they couldnt really play but just had to wait for the inevitable game over screen to appear. The points system seems to go into the minus numbers when the player is hit too many times. this isnt necessarily a bad thing, but it is unusual since normally games tend to cap the points to 0 when the points is below that value.

Finally i feel that the game was indeed telling the truth about the game being difficult however it is clear this game had only local split-screen multiplayer and small monitors in mind since for me, it was near impossible to play since i physically couldnt look at both sides of the screen at the same time and since both sides are attacked at the same time and both need to be controlled separately, it becomes very unfair to the player as a whole.

Overall a good attempt at making a game in such a small time period however the main issue i had with the game was its gameplay. Ideally all the critics i put above are things that i think would improve the quality greatly however if you ever needed to focus on specifics the gameplay is the thing id focus on. The take away i think should be to have people playtest or look at the game while you make it to give you a fresh perspective and sense of difficulty, have a target audience in mind when making the game (Who are the type of people you are making the game for or rather what people do you have in mind while working on it) and ask yourself if the difficulty and gameplay match up with what you think they would like and enjoy.

Once again a good attempt especially with only 3 days to make it, problems and bugs are to be expected. You did well all things considered.

Thank you very much for the review! I will definitly put this into mind in the future. Thanks!

Certaily a good game to try with a friend, sadly as I have none to hand I had to try this solo. Which was really hard for me xD My best score was legit 0! Still a fun little game. I liked the ball movement and soundscape as well.

Thanks! I had origanaly wanted to make an easier mode for singleplayer, but I wasn't able to work on it the last day so I didn't get a chance to do that.

This is a pretty interesting game!

A high score of 40 is as good as I'm going to get by myself.

Thanks for making this game!

Thank you very much! I'll be sure to check out your game.

Actually, I can't this time because Unity doesn't let me build to other platforms. I also couldn't build it to web because it had to many files. Sorry!

I didn't have enough time to download that because I only had the first two days to work on it.

I like the concept but I just feel like its to hard to multitask with it. the controls feel really good though so if you just made it a bit easier to play I think this could be really fun.

Thanks! It was ment to be really hard, but if you want it to be a little easier, then you could play with a friend.

just wondering if you wouldn't mind trying out my jam game.