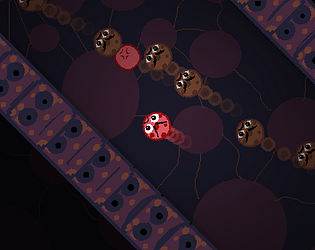 Cool :) my AI weren't much of a challenge. They kind of rekt themselves again the walls. Interesting idea though :) racing in a vein. Kind of reminds me of Osmosis Jones.

Yeah I first time making AI like that, didn't have enough time to make them perfect  xD.

What do you think would of helped you in the how to play?

I was a little confused by the balancing the ones you eat.

Best sound yet to be honest!

Check out my composers channel if you want more!

Must say, this is a very solid entry, great sounds, great gamepad control. Love the art style, the gameplay is quite addicting. Tried it out with the keyboard first, if you have a gamepad certainly use it, makes the whole experience much better. Very well done, I really love the whole feel to this game.

Thanks for the high praise friend!  :D

I'm glad you went controller in the end,  it's definitely designed with that in mind, keyboard is just for those few who may not have one.

I really happy that people can have fun with something I made!  Puts a smile on my face!

The gameplay was kinda hard to control, but still fun. Really liked the sound.

Were you on keyboard or controller?

Thanks for trying my game!  :)

Maybe it was more of getting used to, becuase I played it now more and it came out more naturally, really fun!

Definitely give a controller a go if you have one!

Nice game and very addicting, the controls could have been better but a fun racing game none the less... Keep it up

Just out of interest, were you using a controller or keyboard?

A keyboard, should I try it out with a controller..??

Yep!!!  I had a controller in mind with this entry, keyboard was just a backup for those who may not have one.

I'm almost certain if you played it again with a controller you will have a much easier time with controlling the character.

I loved the game! The theme is hit perfectly where keeping balance is very important to the gameplay, the aesthetics look consistent and nice and the sounds are nice to listen to and compliment the gameplay wonderfully.

The only criticism i have for the game is that the gameplay feels a little difficult to control, the controls feel inverted sometimes. Sometimes it also feels like you spin out of control while other times you dont turn fast enough. collecting the balls can often be really challenging however i would imagine thats the point of the game. However with that aside the gameplay was still interesting to keep me engaged while playing. as such i leave it this rating:

Thanks so much for the review!!  :D  Yeah its pretty hard to handle without practice on a keyboard, much easier if you use a controller!

Can you port to mac if possible?

I've never tried before so I'm not sure sorry, I will have a quick look into it.

Appreciate the gamepad support and fast delivery. Still ~14 hours to go.
Very subtle take on the theme.
Also appreciate the choice to draw the gamepad from the perspective you might see if someone was showing you. Thought it was an interesting little choice.

Thanks for the Comment!  Hope you had fun playing it!  :D