Submitted by Simpathey, Anticdope — 21 minutes, 55 seconds before the deadline
Add to collection 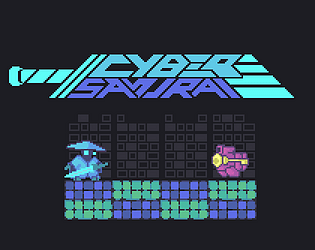 What was your team size?
3

I really love the art style and the colors of this game! Also the character design is so cool and I love the different animations the character does! Also I really like how the the Cyber Samurai logo/title is drawn! Everything is really cohesive and aesthetic. The music is also really cool and captivating.

Submitted
EveryBody
LikeReply
BlankieStudiosSubmitted72 days ago(+1)

Absolutely love the visuals and the idea here. Only thing is the beat was a bit off, and I found the visual representation of the beat to be a lot more faithful than the actual sound. It would maybe help to implement an option to calibrate input latency? Either way, great job guys, this was a super fun one! Music bangs too.

Loved the direction you went with this and the art/music are great. Controls were a bit tight for me, but I struggled with that too. We definitely went a similar direction! Love that you incorporated parry and attacks.

LOVED THIS ART !
It was very fun to play  and I liked the way you put a tutorial before the game start.
And thank you for trying our game Mistakes Two during your stream, it was very fun ! (I'm the  other dev!)

Loved the soundtrack and the artstyle in this game <3 the idea was also very interesting, and i liked the time-based parry!!

The soundtrack is probably the best I've heard so far in this jam. Really nice cyberpunk feel! An issue I encountered is that I could not press the "Play" button on a 4k screen, had to use my second screen in order to play.

The rhythm part worked well for me once I got into a flow. One thing I didn't quite get is what the attack move (the one with space key) is for? You can only damage the enemy by parrying bullets right?

Visuals were great as well, if you were to make this into some sort of side-scrolling game I would totally play it!

Omg I will be sure to tell Calamilio you said that about the soundtrack. He worked hard to compose it. Also you can hit the boss after you parry an attack, but it was hard to tell I think because I didnt have a good visual queue. Thanks for the feedback! We are thinking of a side scrolling post jam version with some more polish

The art and music in this game were great! It was fun when I was able to hit it on the beat, but there seemed to be a bit of a desync between the indicator and when I had to press for it to work. But thats a relatively easy fix and a common issue in this jam, great game otherwise!

too bad that there's a bug with the boss being stuck in the corner. i think with a bit more polish this could be an excellent entry. hoping you continue development after the jam!

Aw thanks! Yeah I really with the boss moved around like he did in the editor. I even had two phases of the boss. But it is really my fault for not leaving enough time for debugging the builds. Keep posted for a post jam build.

interesting I like this combination! I think the screen size does not fit well on my computer as I can't see all the text and the enemy. Got confused for a while until I noticed I need to reflect the bullet back to get progress.

Love the music and character design.  Didn't seem much point being able to move left and right yet, maybe you could have something dropping from the sky to dodge?

Submitted
Cat to the Beat
LikeReply
SimpatheyDeveloper78 days ago(+1)

Thanks! Yeah in the standalone build there is a bug where the boss stands in corner :( He moves around and the fight is supposed to be a lot more dynamic. I think it is a great idea to add obstacles too!

This is cool, difficult with azerty but it's note your fault!

I like the idea, graphics and sound. I was a bit confused with the instructions as they disappeared a bit quickly. It would be a cool game to have perhaps as a side scrolling platformer.

Honestly making it a scroller might make the game more interesting, then I could play with enemy types and behaviors too.

I think it's definitely a concept you should keep working on, I'd like to see more.