The Lord of SandsView game page

Submitted by Michael Miriti (@michael_miriti) — 24 minutes, 25 seconds before the deadline
Add to collection 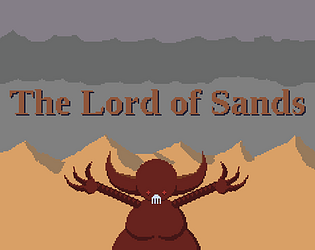 The Lord of Sands's itch.io page

Dependencies
Everything should be in the archive

The Lord of Sands stands out as one of the more polished submissions this year, and presents an experience that is well paced and feels whole.

I have a lot of love for the game's minimalist style. The articulated "cute" demon is wonderfully animated. Parallaxing clouds and screenshake are executed well and give a great sense of scale. There's a high bar set here, but it's one that makes the player's tank feel out of place, with its flat sprite popping out against the perspective implied by the rest of the game's visuals.

The two firing modes are a nice attempt at interpreting the theme, but I can't help but feel that this would be much stronger if the default small shot had some tactical value that wasn't dramatically outweighed by the power of the super shot. I'd be interested to see how the game would play out if the hand smacking phases were accompanied by waves of small mobs or homing projectiles that the player needed to use the rapid fire small shot to take down.

The audio has a retro feel to it, established by the opening rumble as the demon emerges. The player and enemy hit sound effects almost feel like drum samples, and there's a fun kind of rhythm that emerges from the bullet patterns when taking damage while firing back. Music is notably absent, and might add a lot to the game's atmosphere, but I think that The Lord of Sands stands up well enough without it.

The Lord of Sands is one of my favourite submissions this year.

Thanks for submitting and best of luck with the project if you decide to continue work on it :D

I'd also like to do a short interview with you for an article I'm writing on the 2018 Linux Game Jam. Shoot me an email via cheese@cheesetalks.net and I'll send you through some questions!

Awesome entry! I really enjoyed playing it. The bullet hell mix is awesome, the visual feedback for damage on both player and boss is good, a very satisfying boss battle. It woul be a bit more satisfying if the tank keeps shooting when holding the mouse LMB, but awesome job you did, congrats :3

Nice graphics and gameplay! It would be more fun/challenging if you had to shoot the boss's hands first.

Very satisfying game! A nice set of varying attacks from the baddie. My only thought is, the player doesn't take too much damage from hits and, as another user mentioned, if you part in the extreme edge of the map, you rarely get hit at all, making it a cake walk. Perhaps limit movement to the limits of the baddy's hand attacks?

I think that this "ease" is up to the player, I decided to stay in the middle of the screen on purpose just to feel the bullet hell urge tapping left right left right to avoid the bullets :P

Hey! Because I don't know where to begin with rating a game, I just want to tell you that I played your game.

The art and focus of the game are good, but when I first heard the shoot sound you used, I fell in love.

There's no need for a mouse. I just put my cursor on the head, and used LMB as my shoot button (I'm on a laptop). Also staying in the bottom left corner makes it very easy. I didn't know there was a super shot.

I like the art a lot, and the gameplay is really good. However, I can't get the super fire to work properly, and I feel that it could benefit from some music.

You have to keep holding the lmb until it fires, if you release it before it wont work... Also after I started using it there's no reason not to only use it, it almost gave me RSI trying to defeat the bos without it (because I'm dumb and played the game without reading the comments below haha)

the game segfaults if you shoot too fast :/

Oh no :d What dist are you using? Has it happened more than once?

yes it happens every time I shoot faster than casual clicking, the webgl version crashes and the downloadable version crashes. Very annoying when you are nearly done and then click faster