Platformer for the Linux Game Jam 2018
Submitted by ObsidianBlk — 12 hours, 49 minutes before the deadline
Add to collection 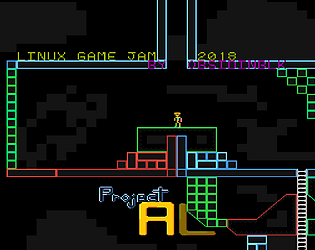 I had a lot of fun playing Project AL, and to me, it stands out as being one of the most complete experiences offered by a submission this year.

The game has a wonderful look and feel that evokes a late 80s/early 80s feel that I really dig. Juhani Junkala's public domain music really pushes the 80s feel with its chip synth sounds and driving rock beat.

Gameplay is challenging and feels nicely rewarding when secrets are discovered or a tricky move is pulled of.

It took a while for me to discover/get the hang of some of the more nuanced controls such as crouch jumping and ball mode, but once I worked them out, they were cool additions that felt like they opened up the game.

The window for double tapping feels like it might be a little too large. I often found myself accidentally dodging, particularly when trying to position AL close to the edge of a platform (which meant unintentionally flying off). Al also doesn't "stick" to sloped surfaces when travelling downhill, making jumping while descending more or less impossible (a common problem that most physics based platformers overcome).

I wasn't able to get the game's bindings to behave correctly on my Logitech F310.

I don't have much in the way of suggestions for improvement beyond experimenting with tighter controls and adding more levels. Fantastic work!

Project AL was one of my favourite submissions this year. I've spotted that you've continued working on the game since the jam and am looking forward to checking a new build out :D

I'd also like to do a short interview with you for an article I'm writing on the 2018 Linux Game Jam. Shoot me an email via cheese@cheesetalks.net and I'll send you through some questions!

I liked the overall level design, with collectables and such, but the controls doesn't help :( my suggestions is that you add a way to control the jump and wall jump, like...if I release the jump button the character starts falling, this by itself would solve 90% of the problems I ran into while playing.

Thank you very much for your suggestions. There is control for the players jump, albeit significantly reduced compared to walking control. This was intentional as I wanted jumping to be risky. Wall clinging is connected to whether you're holding the directional pad while against the wall you are "moving" to. If you are holding neither the jump button nor the directional pad, AL should fall. This allows the player to jump off the wall by simply pressing the jump button again (and cling to any adjacent wall by simply holding the pad in that direction, and subsequently jumping off that was, etc etc).

For my future platformers, I'll give a hair more jump control.