A game about the saga of Godot's core developer trying to code new features and fix bugs
Submitted by Pigdev (@pigdev) — 1 day, 11 hours before the deadline
Add to collection 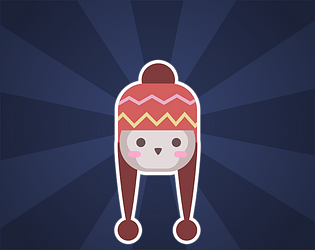 Juan's Saga is an absolutely adorable tribute to one of the Godot engine's core developers (who as an affinity for alpacas). The art style is simple but bold, and the music is super happy.

The game loop is straightforward, but feels like a good start to a larger game (and based on the additional mechanics and enemies I've seen screenshots of, it seems like it was!).

The combination of mouse and keyboard controls feels like it's leading somewhere interesting, but I found myself strugging to perform any meaningful mouse actions when moving. I'd be keen to see how different the game would feel if movement was world-relative whenever the camera was moving instead of screen-relative.

Part of me would be excited to see more variation in the kinds of interactions players can have with bugs that had tactical value that varied depending on context (for example, maybe clicking and dragging a bug attached to the player could throw it a short distance, freeing Juan up for a jump when he's been attacked by a single bug, but being less useful when there are many bugs around).

It's been great to see you continue work on the game, and it seems like you're taking the game in fun directions. I'm looking forward to playing the new version!

Thanks for your submission and best of luck with the project :D

Hey Cheeseness! Thank you so much for such a rich feedback <3

What a coincidence, I just released a feature freeze version yesterday with a whole month of improvements. We took especially your feedback on the live you guys made reviewing the games, and I decided to take rid of mouse inputs. This will allow so many new features later on further development cycles, that it wouldn't make sense to keep this approach from the first prototype. For example:

Due to this design decision we implemented another mechanic which, besides not inovative or revolutionary, fitted the game's gameplay, and allowed for, imo, a better experience.

I mean... what am I giving my unilateral opinion xD

What about you play it when you have some time available? If you installed through itch.io's app it should be up to date already. Anyway, thank you guys for this amazing jam! It was a good opportunity to try some new approaches to gamedev and design! <3

Hi! I understand - I was aware that you'd moved away from mouse input (which has clear advantages) before I posted, but I wanted to give this judging feedback that was based on my experiences of the end of jam build and what it evoked in me since that is what I'm offering to all participants.

I plan to play the new version, but unfortunately it's going to be a while before I have time.

Hey guys, sorry for the inconvenient, but I'd like to make a disclaimer!

Please judge the game by the "linux game jam" build available on the game's description (also links below).

The one available in itch.io (v0.1.0) is a 48h entry for JimJam. After the 48h of JimJam I wasn't able to push a build to Linux Game Jam until April's 17th, when the entry time was already over. So I made a build in GitHub special for Linux Game Jam with lots of new features, please check the links below:

Also, the characters already setup and with animations are also free content! You can Fork them using our repo, which will be constantly updated with new characters and animations as we develop more games <3

Thank you very much <3

If you get interested, we have a repository where we keep our characters with their animations for Godot Engine:

Very nice game! The whole presentation fits very well with the theme. For me, I noticed that i occasionally had a little trouble moving left or right and jumping at the same time, but not enough to be horrible.

Thanks for the feedback <3

Yeah, unfortunately I noticed that small jump bug,  I still have to fix that, since I don't know how to reproduce it :/

Hey! Because I don't know where to begin with rating a game, I just want to tell you that I played your game.

This really looks and feels professional.

Also you communicated the annoyance of bugs very well, with the sound they make in this game.

Also, nice review pointing what you liked! I hope you enjoyed playing it <3 any suggestions to improve it?

Instead of platforms, you could make a skating goat