In this trading card game the key attribute is the temperature of the cards.
Submitted by Viktor — 10 hours, 55 minutes before the deadline
Add to collection 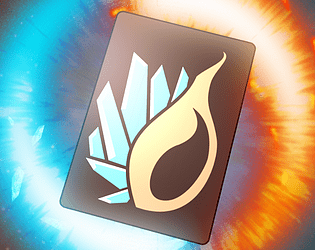 Interesting game. I included it in my Godot Community Jam compilation video series, if you’d like to take a look. :)

Very cool cards game with temperature theme - it has it all. Please keep working on it, maybe you will release Godot card game that will compete with Gwent :)

Awesome game for such a short amount of time. Hope you keep working on it =)

Impressive work for a 3-day jam, both on the gameplay and the graphics! I had a lot of fun playing this game against the AI, did 3 skirmish games which I won - but the AI seemed decent enough at any rate.

The help screen is good to get started. There were some mechanics I did not fully grasp, like the "increase temperature by 2 when attacked" which seemed to be triggered in both directions, with no clear visual feedback that it was during an attack (seemed more like +2/-2 at start/end of turn. But overall, the game rules are simple to understand and they work well. I like that you need to balance your fire/ice creatures to be able to both destroy enemy creatures and deal a substantial deltaT of damage :)

I'd like to play more of this game, so I can only encourage you to keep working on it and build upon this nice idea with a more polished UI, enhanced AI and some more cards in the deck (though the current deck is pretty well balanced already). And then online multiplayer of course :P

I've got a lot of positive feedback so far, so I will keep working on this game.

Some of the reported problems were already addressed in the post-jam branch.

Really impressive what you were able to do in such a short time! Enjoyed the +/- temperature mechanic.

Very impressive work for such a small amount of time, congrats!

Wow! Really impressed with this game. The mechanics are simple, but they work perfectly.

I really enjoyed the concept, I lost against the AI but it was really intelligent, kudos to you

Pretty decent!  Once I read the Help page and understood the temperature mechanic! ¦3

I'm glad you figured out how the mechanics work.

Great Job, Its surprising how much you could do in so little time. The concept is really interesting but I didn't really get 100% how things work.

but having a card-game with multiplayer and AI game in a game-jam is impressive.

I would add a better tutorial.

This is really good! Overall the gameplay and design is great! I think if you keep working on this after the jam and give it that full game polish it could make a really great card game. Surprisingly well balanced for a jam game! My only issues were fairly minor for a jam game:

No real instructions inside the game

When selecting cards, the cards underneath are selected first. That means when trying to target a creature you have to click in the top/bottom portion which doesn't overlap with cards attached to it, which was confusing. I thought I couldn't target certain creatures until I worked that out!

I wrote about the right-click in the last sentence of the help section. I guess it gets missed too easy.

Well, I had not enough time for a real tutorial.