Keep the blob alive by feeding it and keeping it at a comfy temperature.
Submitted by Fenderbate (@Fenderbate) — 3 hours, 9 minutes before the deadline
Add to collection 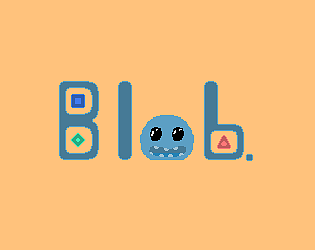 Interesting idea, however it didn't seem to work for me. I included it in my Godot Community Jam compilation video series, if you’d like to take a look. :)

I'm sorry that it didn't work for you :/ I noticed from the feedback of others that the description on how the game should be played doesn't help at all, considering that nobody wants to read stuff.

I'm guessing you didn't bother looking into why it didn't work (and I don't blame you, I would've just closed the game and moved on :D) so here's a quick explaination:

Anyway thank you very much for including my game in your video and thank you for reading my overly verbose response :D

(Also I'm releasing a more polished version of the game, so if you want to give it another go you're very much welcome to do so :D)

Unfortunately I'm terrible at this, I couldn't have blob on my own :( But seriously, great piece of work, I liked that very much :)

I don't think you're bad at it, it's just that I made it too complicated (everyone I showed the game to complained that they don't understand it :P), but I hope you could still somewhat enjoy it. I'll make sure the new version will be more beginner friendly.

Thank you for the feedback! :D

This was a pretty cool concept! The screen is a bit cluttered for the actual game, but that's about what you'd expect for a game jam. Did you make that sound effect with your mouth or find it [for hunger]? I love it XD

I'm still working on the game so it's not so crowded with information and is easier to play.

As for the sounds, yes I made them with my mouth :'D (except for the cooling machine next to the blob I recorded my fan for that)

I'm happy you enjoyed the game and thanks for the feedback! :D

It's quite difficult in beginning, but the help menu really helped.  Congrats for the game. i liked. :D

The help menu helped? That's a happy suprise! :D Everyone else complained it's too complicated.

I'm happy that you liked the game and thank you for the feedback :D

Like the art and sound!  But the game window was so big I couldn't see everything and really couldn't play.

Yea I know the screen is too big, that's why I added a decription under the game to put the browser in fullscreen by hitting F11.

After the gamejam has ended which I submitted the game for, I'll upload a new version that won't go fullscreen.

Thank you for the feedback! :D

Nice idea and good job on the overall implementation and graphics, as well as the music and gurgling sound effects :D

The gameplay is a bit complex at first, and there's indeed a lot of information to take, while not being really clear at the same time. I read the instructions first, did not understand the part about temperature limits to put in ingredients, and then wondered for a while why putting ingredients on the container would make them disappear without visual feedback. Even when I understood it, and managed to cook some recipes, I quickly grew annoyed because when trying to drag the cooked product out of the container, it would sometimes disappear (because interpreted as dropping it on the container, which is outside the "put ingredients in" temperature range when you cook).

With some more polish on the feedback it could definitely become a pretty fun game though, and for a 3 day jam it's already quite decent.

Yea I know the description is really unclear. I tried to cram too much information on one screen, but after the jam voting ends i'm planing on realeasing a new build that has clearer instructions.

I did have a plan for making an effect for substances dissapearing but i forgot about it and realized it too late :P again, I plan to add that in a new build.

The "accidents" where you can move the container a bit and destroying the substance in the process annoyed me a lot as well, I just didn't implement the fix yet. (will probably place the substance further away upon removal)

Thanks for the detailed feedback I'll make sure to put some improvements into the game :D

Blob looks really cute but the web version of the game went way beyond my screen size. Thankfully the linux version worked well. Cooking is awfully complex and it was hard to satisfy him. Good job.

The screen size was too big?  Did you set the browser to fullscreen? (It says that you should do that, under the game)

I'm sorry that it was hard to play, due to lack of time I didn't have much time to make a proper description

Thank you for the feedback and I hope you somewhat enjoyed it :D

There's no choice, the game goes fullscreen, well full-browser window automatically when running the html5 version. So it can only be seen properly by pressing F11 (to hide the browser controls).
I did enjoy it, it's a fun game. Just takes a while to figure the controls out.

A bit hard to understand what to do, even with all the (over)information, but a nice experience, liked the crafting and how it blended with the theme of temperature. Keep up the good work!

I know it's a bit too much information and I don't know how to make good tutorials or good descriptions :/ That's the next thing I'll have to learn somehow :)

Thank you for the feedback :D

The bottom of the screen was cut off for the web build, making it unplayable in browser.

I really want to like this game despite the glitchy controls and the information overload. But don't let that discourage you, it's better than a majority of the first-time games made for this jam.

Yes i know the web build is glitchy for some reason web export is a bit flawed right now, but it works perfectly on firefox (in theory).

As for the cut off screen the information says right under the game that you should put the browser in fullscreen.

I don't know how to do a proper how to play description and I didn't have time to think about it so I don't even expect anyone to understand the game mechanics :P

Thanks you for the feedback tho it's really usefull :D