A platformer with little time to get to the end.
Submitted by Skwyni
Add to collection 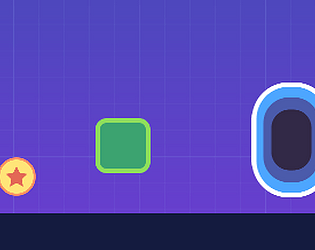 Game Description
A platformer where you have approximately 7 seconds to beat 7 levels.

Really cool idea, and really well executed! I had a lot of fun playing it!
My only main issue was the jump felt really slow and difficult to control. Once I got the hang of it, it was alright, but it didn't behave like I intuitively wanted it to, and made the tower stage especially difficult to master.
Overall, really great work! Nice entry! (I won in 14.22 seconds, thanks mr. coins)

The concept seems interesting but I've gotta say the level design really detracted from the game for me.  Since the game is pressuring you to go as fast as possible, and the locations of the "coins" are continually trying to get you to slow down.  Especially considering how well it was timed out essentially requiring all 7 coins.  To be more specific:

Alright, unfortunately I was probably a little more harsh than I meant to be, but the mismatch of the level design and the core idea behind the game really got me.  Since they're entirely at odds for most of the game.

Definitely a cool concept tho!  Just would've preferred going all in on the speedrun esque game.

Thanks for the feedback ! You are not being harsh, you are being constructive, and that's good ! :)
It was my intent to make the whole game playable without collecting any coin, and coins to be a little detour to help those having trouble, but as I didn't work enough on level design I failed to do that. As I decided on having 7 levels it required me to have a 1 second clear time on average per level and that limited me heavily in my level design, especially for making vertical levels, hence the addition of coins.

Glad you liked the concept though !

Fast paced platformer with music that makes you wanna rush through it even more. The game looks very similar to the one I created when I did that tutorial on YouTube haha. Good job, good implementation of the theme!

Excelent. Just the kind of game i like: fast and fun. Maybe the pixel perfect jumps can be a bit frustrating, but as the game is short, it keeps you trying

I really like the fast-paced gameplay that your game has and the music suits it pretty well. It would make the character a lot more controllable if they accelerated up to max speed instead of them moving at max speed immediately

Submitted
The other 6
LikeReply
SkwyniDeveloper151 days ago

Yeah, but having too much time before reaching max speed would break the flow between levels, which is something I didn't want to have.
Thanks for the feedback, if I go back to this game I will try to work on the controls ! :)

Very nice speed running game. The grapic is simple but it is suits the game so it is not a bad thing. And the sound is nice as well

Thanks, though the graphics and audio weren't mine. Don't hesitate to show your appreciation to GDQuest for the art (I took it from one of their tutorials) and Juhani Junkala for the audio (I found his musics on opengameart.org) ! :)

Good use of theme! The automatically restarting game made it really easy to just keep trying. I think the horizontal acceleration was maybe a little slow? I had a hard time landing on small platforms.

Yeah, it takes a while to get used to the movement speed. I didn't have enough time to tune speed better, I will do better next time, thanks for the feedback ! :)

I enjoyed the music it kept me going! I got to level 6 a couple times.  I didn't mind having the restart happen automatically so i could make another go at it.

Submitted
The Seven Trials of Chronos
LikeReply
RomeRomeySubmitted155 days ago

Great job on the theme here! It was just a tiny bit too hard. Powerups could have been slightly more beneficial (like 1.75 seconds instead of 1.5). I'd also be interested to see what tweaks you could make to the levels/controls to make the game winnable in 7 seconds without powerups!

Thanks a lot ! Yeah, the time added by the coins changed a lot while I was making the game, I tried every value between 1 and 2, and made a last minute decision on 1.5 :')
Yeah, it was the objective at first to make it winnable in 7 seconds, though I didn't have enough time to think about level design to make it possible. Oh well ! Might make adjustments when the ratings are done.