The other 6View game page

A simple top-down shooter
Submitted by Aerosol_man — 5 hours, 7 minutes before the deadline
Add to collection 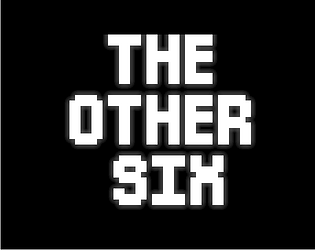 The other 6's itch.io page

Simple, but still fun! As others said, I think it would have been better with lower health across the board. Also, while I thought the movement felt ok in general, it was a bit frustrating when I couldn't easily manage to aim down the narrow corridors due to the slidey movement.

The enemies are too random for my taste, but other than that a very solid game :)

Very nice 2d shooter.  I am kind of missing an alternative shooting mode on right mouse button (could me mines or something). Just a random idear

You got some extremely smooth movement controls, which makes moving around alone pretty fun. The sound effects on the enemies are pretty quirky and gave the game a lot of character.

The movement's imprecision lends itself to making the game somewhat difficult actually, but at the same time there isn't too much danger of losing health and dying. The combination of hard to aim (probably a ton better on mouse, I'm on trackpad, but the sliding movement remains the same) and not much danger of being hit means the levels can take a pretty long time. And on top of that, the enemies don't die in a single shot. I think giving the enemies less health and/or making aiming easier (maybe a full laser beam while aiming and not just an arrow) would make the game less drawn-out.

Well done with music, the sound effects, and the smooth movement. Great job!

I loved the simple art and how the animations really brought them to life. Felt pretty well-rounded for a jam game!  Well done!

I loved the simple art and how the animations really brought them to life. Felt pretty well-rounded for a jam game!  Well done!

I enjoyed playing through the levels! I only had a feeling that the enemies never even wanted to try to attack me. But it's fun how they are programmed and behave, and to shoot them!

I also felt the the enemies weren't really trying to attack me. I guess it wasn't just my lucky day :D

Thanks for the feedback! I definitely agree about how I should have made the enemies more aggressive in general