Manage a bakery in hell.
Submitted by jdbuenol (@jdbuenol), Rydath — 45 minutes, 3 seconds before the deadline
Add to collection 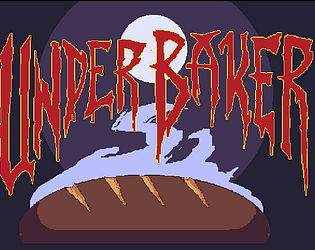 Source
No. Unless asked.

You added a lot of mini-games, which were all pretty fun. I was getting stressed at the beginning because I though there was a timer and the customers were not going to like me waste their time (and who wants to anger the devil?), but it seems like it wasn’t the case. ^^

I follow the others on the controls: For some mini-games it was not clear what to do. For the pretzel, I took time to understand you had to use the keyboard, as the rest of the game is played with the mouse. For the flappy-toaster, it was only after loosing a few times clicking randomly that I understood what was happening (the toaster falls rather quickly). For the rolls, even after many tries, I still don’t understand. I managed to get it rolled a little by click-and-dragging from the bottom up, but as soon as I release the mouse it reverse to the original position…

I also think the “randomness” of the orders should be better controlled: on my first try, the first monster only had 1 order, and the others 2 each, and I only played 3 different types of mini-games, meaning I would have missed 2! I played it again because I wanted to try all of them, and this time, they had 3 or 4 orders. So by controlling the randomness, I would say: have each mini-game played at least once (or twice?), the total number of orders should be within a certain range (10 to 12?), and maybe a single character should never order twice the same thing. For a small game (such as one made for a game jam), players will likely play only once, so you want to avoid cases where they would miss content (didn’t try all the mini-games) or that is too repetitive (e.g. needs to do 16 times the same mini-game).

The art was cool, and I loved the music of the main theme! (The music of the title screens starts of a little “weirdly”, probably because the virtual instrument doesn’t feel very realistic, but it gets better when backed up with other instruments.)

Anyway, great submission! (And thank you jdbuenol for rating and commenting everyone’s game!)

Yeah, thanks a lot for playing and reviewing my game, i learned a lot in this jam, it was my first time with a team (Rydath is a really awesome artist). And yeah, you're right about the controls and the randomness,  the next time i will make a game this complex for a jam i will be sure to include instructions or a tutorial and to control a bit the randomness so there is variety. I didn't comment all the games (only most of them) but i played and rated them all.

Flappy Toast, I love it!

Also I couldn't figure out how to make rolls, I could only roll them half way.

The concept is really cool, and it feels like there went a lot of work into this for a game jam. good job!

Game is pretty ok and full on known minigames, but still hard to understand sometimes.

Once you figured them out It gets better, but still everything feels unpolished/untested. Give someone your game and ask if it's easy to understand and collect some feedback! :)

I am victim of this myself, but try to reduce the scope. One well polished minigame will be much better then few unpolished  :)

Congratulation on submitting the game!

Very cool game! This one is a lot of fun!

Much the same as some others, there were some control things that threw me for just a while. One was with the doughnut mini-game, where I finally realized that the logic was working from the mouse pointer instead of the visible nozzle of the glaze bottle.

Definitely found this interesting as a concept - the donut mini game went wrong on me at one point and started going crazy no matter what I did (O and X appearing at the same time and all sorts of things!) The jam/glazed roll mini game was fine until I had to roll it and I could never seem to get the mouse in the right place!

The coffee game and pretzel games worked fine all the time though.

Nice graphics, I only wish there were instructions for how to do some of the stuff. Maybe more markers or something, or a little instruction booklet?

I pretty much failed every single roll and the donut sometimes confused me cause it'd give me both the 'good' and the 'bad' after I did the tops.

I loved the concept of baking in hell and the mini games were fun - especially the flappy toaster one.

Interesting game with some cool graphics. I had a hard time figuring out what I was supposed to be doing half the time though.

Nice collection of mini games and concept! Flying toaster and cthulhubuck coffee are my favorite. Feels like I could benefit from some brief instruction before each mini game starts. The roll drove me crazy for ten minutes  straight because I couldn't figure out how to make it stay folded. :P

Some of the  character and food art is extremely good looking here.