Team up with butter as toast(s) to get to the bottom of this mystery platformer game.
Submitted by jmbjr, sophiadoodles — 2 minutes, 9 seconds before the deadline
Add to collection 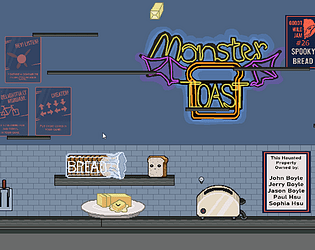 Game Description
Save the haunted bakery using your Toast Powers!

This was really great in my opinion, your use of theme was spot on. The different types of toast to overcome different kinds of obstacles is kind of what games are all about I reckon. One of my favourite games this Jam!

Thank you, really good compliments! And it is always good to hear people say the theme is spot on!

My only problem with it was that you had to go back all the way to the beginning when you died. Made it very, very hard to beat!

Thank you for your comments!

Sorry that the game seems hard.  The secret cheat code should make it easier to not die so much, but you do have to unlock Franken toast in order to see it. We intended for the ghost form to be a nice time for people to just float around and explore, but I can see it being annoying when you didn't want to do that. Definitely something for us to think about if we ever make any adjustment to the ghost toast.

Really great kind-of metroidvania. I like the fact that it lets you explore in ghost form, the secret cheat was a nice detail, it is really cool, i didn't use it (i swear). The final boss was a bit simple but still fun to beat him. The artstyle is certainly amazing (The cake looks delicious again like in the past GWJ game), the music and SFX are simple but nice enough. Every toast-form feels unique and the vampire-form makes you feel powerful.

I'm glad you like the secret cheat area! And I believe you that you didn't have to use it.  I'm probably the only one on the team who needs it really, lol.

Having another cake in the ending is total accident though, I wonder if that's saying something about me and my secret food preferences. :P

I am happy to hear you thought every toast feels unique, and that vampire toast feels powerful by the time you get to him. I know that's something John and Jerry, who designed our levels, has strived to do. So they should be happy to hear someone has pickup on that.

Wow, great game! And so much content for a game jam. I finished it, and I can say it wasn’t… a piece of cake. B)

… Nevermind. So as I said, a lot of levels, enemies & characters (with various moves), and each with their own sprites. The musics were nice, and cool sounds effects (though I would have decreased the volume of some, such as crushing cans). You even added a boss fight, with awesome animations! The patterns were a little hard to read sometimes, and it seemed to glitch a little? (At one point it was “jumping” up and down around the room, but it would teleport to the top position instead.) But I had enough butter stacked to brute-force it.

They were some animations not playing correctly, and fighting some enemies was not always smoothly (hit boxes? enemies going to fast? too much delay in the attacks?… hard to say), but nothing really bad.

I didn’t understand until the very end how to use the “vents”. Retried the game again with the cheats, and tried every character until I got it: it was the ghost!

Wow, thank you for such detailed feedback! Always much appreciated as we know people don't always have much time to write comments.

Yes I totally agree the can is a little loud, and the boss could totally use more of our time! We probably over scope this project quite a bit,  there's so much fine tuning that would have been nice if we can get to them!

All the animations play for me on my computer, but I have heard it not always played for some people. I'm totally bummed about that, since I have worked really hard on my animation. Probably something we should look into further.

I'm happy that hear that you found out ghost can enter vents! We intended for the ghost to be sort of a scout character that can get in places to see what's coming ahead sometimes. But it's much more fun playing as other toasts, so we probably just need to expand his capability a bit further for people to want stay a ghost longer.

Thanks again for playing and leaving us feedback!

Great game and fun to play, It reminded me of my old NES games.
Good job.

That is a good compliment, thank you!

Loved your artwork in this, it's so silly and fun.

I am so glad you enjoyed the artwork.! I didn't know how graphic intense this game was going to be when we decided on the idea.  I am totally exhausted!

Enjoyed the game art and the mechanics of the game. Thank you for sharing.

Thank you for playing and trying the game!

I was a bit confused at first. It took me longer than it maybe should have to realize that my F key was also an attack.  That was pretty fundamental to moving along, so I was glad when I realized it.

I didn't use the cheats at all.

The boss fight bugged out for me. I died and was returning up to fight again, and accidentally hit the boss through the wall, then the boss stopped moving and took no hits.

Thank you for your compliments!

I think we designed butter bob to give player control tips as the game progresses, maybe he forgot to mention the "F" and "Enter" key for attacking. I'll have to look into that.

That's great you didn't need the cheats. I personally can only get to myself to get to were toast and have to cheat after that to get to the boss.

Sorry the boss bugged out for you. We probably could use more time on balancing/debugging him. But overall I am just happy that he even made it into the game!

I loved the graphics and setting of the game. Unlocking new ways with new forms of bread was pretty neat, kinda metroidvania like.

The controls where a bit clumsy in my opinion. A lot of acceleration and the hitboxes where a bit unpredictable...

But I was glad I played trough the end or else I would have missed the bossfight :D

Thank you for the comment! Yes the hitboxes are not the most obvious thing here! Part of it is kind of my fault that I drew my toast with such short arms, that the coders on the team felt like they have to compensate by allowing a bigger hitting radius than what it looks like on screen. It's totally our first metroidvania type game too, so we are still learning!

I'm happy to hear you got to the boss! That one took forever to do graphic wise, and I am pretty sure my poor brother who has to string it all together  with codes was not having the time of his life either.  So it's very  good to hear people were able to see it in action. :)