RPG platformer. Lenore finds her home town deserted! She must defeat her foes and discover the fate of the townsfolk!
Submitted by Sage7, mhm32167 — 36 minutes, 17 seconds before the deadline
Add to collection 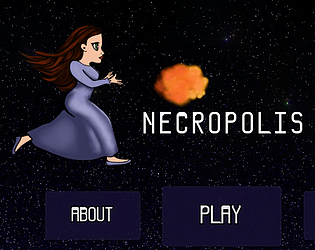 Source
Yes we are sharing the source - https://gitlab.com/snowburst-games/godotwildjam25

Game Description
Necropolis is an RPG platformer. Lenore has returned from her travels to find her home town deserted. What happened? To find out, and defeat her foes, she must change herself and become what she despises...

Participation Level (GWJ only)
This is our third Godot Wild Jam :)

Participation Level across all Jams
This is our fourth game jam :)

I played this on stream, and decided to play on Hard difficulty. After calling a builder to mend the hole I'd punched in the wall, I went back in on Story difficulty and saw it through to the end. I really like how you aimed for the stars with this: a Metroidvania with RPG elements is no mean feat, and even though it's a little rough around the edges, it's got real heart to it. The dialogue is quite charming (ha!), too.

Thanks for playing and for the feedback! We did try to put a lot of elements into the game, but maybe didn't make it as accessible and polished as a result. It was really rushed to get everything ready towards the end, and so testing and balance was a little limited. Perhaps our game was overscoped? We plan to release a small post-jam update tweaking things based on jammers' feedback, including difficulty. Thanks again, and I'm sorry I missed the stream :)

I really like the magical and slightly dark universe, and the fact that the game is story rich, the dimensional shift mechanic also. Oh and the ghosts lament sound is great.

Thank you! I'm so glad you liked it! We were going for magical and slightly dark and mysterious - spot on! Thanks so much for playing <3

Cool that you where able to work a little story into the game! I think the way you implemented the berserk spell was cool. I played through "Story" difficulty (not sure how that ranks on the Easy, Medium, Hard difficulties). I would maybe add a little differentiation in the style of each part of the level, as I wasn't always sure if I was going the right direction. Still, great game for a short jam!

I saw you used Audacity? Did you make the music? I liked it!

Differentiating the regions is a fantastic tip that I never thought of - thank you! I really appreciate these tips. I always find it a little difficult to balance giving too much instruction and not enough direction!
Yes! I made the music in Bosca Ceoli and fixed it up using audacity. I made all the sound effects in Audacity too - couldn't have made ghost noises without it! Haha! I'm so happy you liked it <3

Useful feedback thank you! The level design was a little last minute and we would do things a little differently next time. We don't want to give too much away so as to encourage exploration so we didn't want quest compass style elements. Perhaps smaller levels and a minimap. And yes differentiation in different parts is a really good idea - perhaps using different obstacles and scenery in each area.

Story mode is the easiest for those who just want to experience the story. I think I'll add a top tip for the post jam update. Thanks again :)

Very nice game! I got stuck in a part and could not finish it, but the idea is very promising. Love how the theme was applied!

Thank you so much! I'm glad you liked it :)
I'm sorry you got stuck - we had a little issue with collisions on one of the platforms that we will fix in the next update! Thank you so much for leaving feedback, we really appreciate it! <3

Thank you for the feedback! Can you tell us how you got stuck so we can try and fix it for the post jam update?

I simply did not find anywhere else to go. There was a wall I could see the other side but could not teleport to it. When I clicked I would teleport to the same place I already was

This game controls really well, and your animations feel very smooth. I would love to see you guys keep practicing to have a bit more consistency in your graphics. It was very fun to play, and I think you have a lot of potential here. Good job :)

Thanks so much for playing! I'm so happy you enjoyed it. Also thank you for leaving feedback, it really makes a difference! Much appreciated <3

The difficulty selector is a great addition for a jam,  i liked the music and the use of line art, the level structure could be improved sometimes is hard to navigate, the dialog and narrative are interesting and on the right quantity, I liked the RPG elements and the blink ability, I played on medium.

Thank you for your feedback! Very happy that you liked it :)  I often find designing levels for platformers really difficult, and in this case, since the player has magic abilities like teleporting, it made it even more difficult because we wanted the player to use the ability so we put some obstacles that you could only cross with the blink spell. I need to watch some tips on level design! We also had feedback that making the regions look different might improve navigation so will definately take that on board next time.
Thanks so much for playing <3

I got stuck and couldn't finish the game, but I liked the setting and theme! The fact that the NPCs have different lines every time you talk to them is very interesting!

Thank you so much for playing! I'm sorry you got stuck - did you get stuck between a platform? I know that we have one problem with collisions that we will fix next time! Thank you so much for leaving feedback <3 I'm glad you enjoyed the NPC dialogue, it was fun to write!!

Really good, you put a lot of effort into this! I got confused for a bit when the npc man suddenly was at the other side of the map + changed into Jane's mother but then i realized it was someone different ;)

Thank you for playing!
Haha! Yes the npcs looked very similar didn't they? If we had one more day of game dev time, Jane's mother would have been a woman!

The game was so cool. The graphics are really beautiful and the concept is so nice. The story progressed with ease and gave a sense of progression and hope.

Thank you so much! I'm so happy you enjoyed playing it - it really means a lot to us :) <3

Hey, nice game! It has a bit of a Alice in Wonderland feel to it, which I really like. Graphic is quite awesome, though I was a little confused why Jane's mother would have a male npc graphic. :P Music and sound effects are great! I wish the message window wouldn't stop the music from playing though.

I feel like you did a decent job of telling the player what the controls are by displaying the info on the screen here and there. But I must have missed the instruction somewhere on how to use the pendant,  I was not able to transform and see the other world.  While looking for a reminder of what the game controls are in the game menu, I found going from keyboard to mouse control a little awkward. If you go further with the game, might be nice to consider doing the menu in keyboard too?

Overall I was quite impressed on what's in the game. Though I was not able to see the other world, I can see the creatures floating semi-transparently in the background and that was a neat detail.  I also thought the animation and sound effects you use for the spiritual safe spot is quite magical. :D

Thank you for playing! I'm so glad you enjoyed it and liked the graphics!! Haha! If we had more time, Jane's mother would have been a woman!

Very happy that you liked the music and sound effects - it was fun to make this. Who knew I'd end up making 10 different ghost noises into a microphone? Not me!!

We realise we needed to make some of the instructions clearer - like clicking the pendant to go to the ghost world and clicking the portrait to increase your spell level. This is why your feedback is so much appreciated! It really helps us take these notes on board to our next game <3

Wonderful game! Liking all the sorcery/magic theming! One little detail I really like is that NPC's never seem to repeat the same line. It's a nice little touch that goes a long way. Nice work!

Good concept! I beat it on STORY mode, a very good game with good secrets.