Strategy board game with a twist: the board moves
Submitted by Mad Parrot Studios — 2 minutes, 5 seconds before the deadline
Add to collection 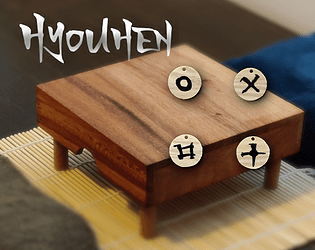 Source
Not sure yet

Game Description
Strategy board game with a twist!

A lot of game modes, very complete, loved the photo graphics and your tabletop approach, lovely music, its hard by highly replayable.

very interesting game and backstory. I think everything looked pretty clean and had a consistent look and feel. I thought the finger looked a bit creepy though, initially (it might have been the speed? dunno) but after a few rounds I stopped noticing it.

I wasn't able to test the multiplayer but I definitely racked up a few Ls against the AI since I think I wasted too many moves on flipping the board when maybe I didn't need to.

Great job - I really enjoyed this game. I lost against AI but then re-read the rules and won! AI was actually winning and then changed colour, allowing me to get ahead :D Enjoyed the music too and it's really cool that you have a multiplayer option. Well done!

The logic for the AI is:
Easy: afraid of changing color, will only do it when trapped and can no longer move forward. Even when trapped, will move forward until hits a wall, and only then flips the color. Not aware of player (plays as if you don't exist)

Medium: calculates the number of turns it would take without changing color, versus number of turns if flipping once (including the turn spent to flip). Decides on the faster one. When trapped, flips immediately. Also not aware of others, plays as if alone on board

Hard: does the calculation above for itself and also for all competitors in the board, and finds the most dangerous candidate (closer to winning). Instead of deciding the shortest option, it decides the option increasing the advantage compared to the most dangerous. So it may flip the color making it worse for itself if it will make it much worse for you. Playing with several AI pieces makes the game easier since they are not allies, so they may fight each other while you make use of it

Nice work! One comment - I wish there was a way to predict how the board changes. I often found myself changing the board in favor of the opponent!

You can predict! The sections always rotate in the same direction, which is reverse of adjacent sections. So if first section rotates right, second rotates left, third right, fourth left etc. Also alternate in vertical rows

If this is not happening then we have a bug!

Good job on the game. Was pretty engaging.

Great game! I'd like to play some more and develop a strategy. Good music and graphics.

Great game and fits the theme very nicely! Faster moves please! Doesn't affect my rating though, very well polished and complete for a jam. Keep up the good work.