Welcome to Airport Charlcago! Time to catch your connection by running non-stop to your gate!
Submitted by jmbjr, sophiadoodles, JerBearStare, Greynaab — 11 hours, 41 minutes before the deadline
Add to collection 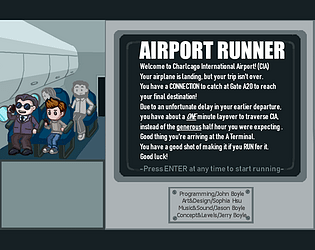 Game Description
RUN through the airport to make your connecting flight!!

Hey. Congrats on making this cool looking game with very nice graphics and well fitting sound. I've had a bit of a hard time doing good runs though, seems I'm better at it in real life than in this game. Seems there's always an old lady that will kick my ass for running into her ;)

Congrats on this entry, keep up good work!

That's a lot of fun! The grandma animation made me laugh, and the soundtrack is very adequate!

Thank you for your comment on the animation and the soundtrack! I'm glad the game was fun to play.

Great runner! I made it on the first attempt, but the speed in the end was scary:)

Thanks for trying the game! As for the uncontrollable speed at the end, I blame those candies that you can pick off the floor for free. :P

(suspiciously tripping through the airport) what's there in those candies?

It does feel like knocking onto people is inevitable but I do like the hectic nature of the airport.

Still gameplay wise it does feel a bit dry. I do like the idea of a runner game where knocking onto someone isn't a game over but rather slows you down while reaching the time limit but in practice I felt like I didn't have a lot of control for skillful play. I also didn't really care much about collecting the coins or anything.

I noticed that I still made my connecting flight even when the timer reached 0. Perhaps it's a bug or maybe a social statement about how we end to rush at an airport but airlines tend to be more lenient than we think.

I wish I had more control over the obstacles (let me shove an elderly old woman at the cost of my morality or something) but for the scope of the jam it works.

The art and animations are pretty nice and cute and I think the music served its purpose well of having that tension, especially when the timer went to 15 seconds. The art does remind me of a game like Citizens of Earth. I would love to see the style in an RPG or story-driven game. Kinda like Earthbound's aesthetic but without pixel art. I like it.

Overall I am not really sure what I'd do with the gameplay in particular but I think the aesthetic looks great. I enjoyed playing it for that. The controls are good for the gameplay too and I never felt frustrated by them

Wow great comments and feedback! I especially like the idea of a potential ability to shove people out of the way. I think that could definitely add an interesting choice to the player.

I think we needed some tutorial levels to explain better what the point of getting the coins and snacks was. Snacks increase your speed so you can clear the level faster. Coins/skymiles are tracked and if you are able to pick up enough (50 percent) then you can get an in-flight upgrade to better seats.  The upgrade also lets you start the next run at higher stamina/speed (i.e. you felt refreshed after the flight).   And if the timer runs out, you aren't eligible for the stamina upgrade.

But we weren't able to carve out more time to make this clearer in-game but it's definitely something we want to improve.

Thanks again for the comments!

Thanks for the detailed feedback! It's not too often people has time to thoroughly comment on all aspects of the game. Definitely helpful and much appreciated.

And RPG would be fun to make one day... maybe not in a game jam setting though, just story boarding would take a week by itself. :P

Nice entry ! Difficulty level is very well balanced, not easy to do that for a game jam. Special felicitation for all the graphisms !

This is a fun running game! I like the animations of the grandmother and the businessmen, really gives a feel for their character. The narration at the start helps create the atmosphere as well :)

However, I do think that there are certain parts that have clearly no right move? I mean there are times when there are obstacles in every lane. I think having the player lose under no fault of his own isn't ideal. It'd be better if you just create higher chances for mistakes to punish poor skill

Overall, this is a good game! I can't wait to see you expand on this :)

Thanks for playing and for your comments!  And I think you are correct that sometimes all lanes can be full. Part of that is probably due to the wonky way that the enemies 'wake up' (proximity to the player).  Based on a bit of investigation, it appears that if you get hit at the wrong spot (which stops the player), some enemies can wake up earlier than others, which causes the full-lane blockage when the intent wasn't to force the players to deal with that kind of situation, so I think we will need to look closer at those kinds of situations for sure.  (if you are somehow able to maintain speed and dodge everyone, then there *should* be a sliver of space to squeeze by.. at least that was the intent).

This game excels visually and is a blast to play! I love the little bits of narration between levels. Wish I had time to put that in my game!

I wish we had more time to balance our game and do a proper ending!  Every game jam I always feels like other people's game is more finished and more polished. Lol, probably normal to always wish for more time. I'm glad you enjoyed  what we managed to get in!

I love all the different characters and their reactions to getting hit, it really feels like a crowded airport and gives me a bit of anxiety :D. A great interpretation of the theme. The results screen and bit of narration between levels is a great touch.

I'm glad to hear you thought it feels like a crowded airport and that it was a good interpretation of the theme , we figured trying to make connection  in airports is a stressful experience a lot of  us air travelers can relate.  :)

By the way your game is like perfect, I am envious of how polish it is.

The art is great on this game, and the gameplay is solid. At some points, I felt like there were so many people that it was impossible to avoid them. The speed boost due to the coin collecting is a nice touch, and adds some importance to the collectibles. Nice work!

Thank you for your comments!  I can't for the life of me do well enough in any of the three levels to get out of the economy class seating at the end, so I know what you mean  that it feels impossible at times to avoid any collision.  I'll probably beg the rest of the team to put in a tutorial level so I can at least do well with one level. :P

Amazing game! Although a bit unfinished, the art and animations are just wonderful. I love the touch with the specific smacks from each character, absolutely amazing.

Yes we always  thought we budget enough time to properly finish our games, but  so far we always try to do too much.  I'm glad you enjoyed the art and animation, they were fun to make but a lot of work!

Nice Game! The graphics are amaziong! An the angry grannys are hilarious!

It briefly cross my mind she's a little too violent for such nice looking little old lady when I made her, but  glad to hear you enjoyed her antic!