Submitted by Fuchsia Studios (@FuchsiaGames) — 17 hours, 10 minutes before the deadline
Add to collection 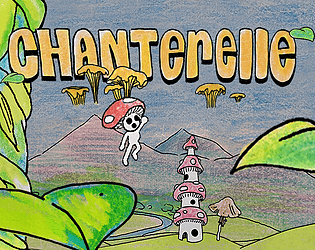 Love the art in this! I included it in my GoGodot Jam compilation video series, if you’d like to take a look. :)

Wonderful graphics. I liked the game.

I adore this art style! Very cool and impressive for the jam time frame!

Why does my Input feel very delayed by Half a Second, even though the game runs at the maximum of 60 Frames per Second?

Other much more processor-intensive Godot games don’t have this issue, such as almost all 3D Godot games I have tried: Even though I use a Bluetooth Keyboard, and even if they run at only 30 Frames per Second, the Input still feels instant.

If this issue gets fixed, along with implementing considerations on Enemy Placement to reduce wait times between jumps, this would actually be a great game.

I'm not sure why this would be the case, unfortunately.  What platform are you playing on?

We play tested on MacOS, Windows and Web and unfortunately never encountered this :(

Why did you say “unfortunately”, when you said that you never encountered this issue? This is Good!

I was playing the Web Version, and then the Input lagged all the same in the Native Linux Version, despite the highest possible framerate.

I have only encountered this issue with your specific game so far.

Maybe the input is not actually delayed, but still feels delayed because the game might not use 2 important player fairness techniques:

You should look these 2 terms (Coyote Time and Jump Buffering) up if you want to know more.

ZOMG THE ART!!!!!!! The art!! Oh my goodness. Was this actually hand drawn? Or what's going on here because that was crazy. I went wild the second that I saw the art and the name of the game!
Really fun and very very charming. No stone unturned! It was fun having a new path each time I lost life and speaking of which--can we discuss the losing screen? That was so wonderful and very creative! Loved how you did that artwork! Great game!! Will definitely be playing again!

it is all hand drawn! The art is drawn by hand with pens and crayons, scanned, and cleaned up in PhotoShop!

Thanks for playing and the super kind words!

That is Insane!!!!!!! My mind is blown. It really is such incredible artwork and the animation of the handrawn graphics is so clean. Really superb work! The effort really shines through!

This game was the bomb, it felt great playing it. Congratulations!

As I said on Felipe stream, the art is gorgeous, really loving this style!

And yeah, the game is daaamn tough. :P

very polished game , the art is very cool , i liked the procedural generation ,but game is hard  i only  reach once

I really love this game, the intro and artwork sets the tone in such a charming, engaging fashion. Platforming is tough but rewarding.

Loved it, really hard tho lol. but still liked it a lot and the visuals are stunning ^^

That in 10 days is absolutely incredible! Loved the gameplay elements!

Submitted
Deep of the Water
LikeReply
Fuchsia StudiosDeveloper105 days ago

NOTE: We just updated the game with a minor bug fix to address the skybox rendering at very high bean stalk heights.

Love the art, Love the sound. Found the game brutally difficult. Also, i could not dash on the keyboard or controller. Not sure if I was missing something. Either way great work.

dash is unlocked after getting a power up after climbing the beanstalk a bit.

Sorry about the difficulty! I'll have to take a look at tuning it a bit!

We just added an "Easy Mode"! You can toggle it at the bulletin board in town! Hopefully that helps make the game more enjoyable :) Thank you for playing!

The art is really beautiful and the gameplay is quite smooth. You're one of the best ones for now!

Maybe the collision size of the dragonflies is too big?

Thanks! We just toggled the size on the hornets down a little bit, as well as added an easy mode at the bulletin in town, if that appeals to you :D