A dicey dice-shooter.
Submitted by russmatney (@russmatney) — 2 hours, 32 minutes before the deadline
Add to collection 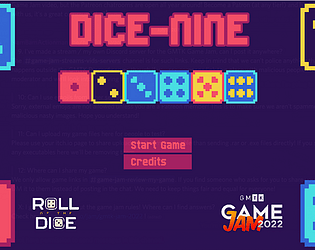 How does your game fit the theme?
You play as a Die, you shoot die... it's all about the dice.

Super creative game. Love the concept and the gameplay too. Great work :D

It is a solid game: beautiful menu, ending, nice sounds, simple but cool graphics. However, i don't really like using dice just to display health. Most of the time i didn't pay attention to enemies health and even to my dices health. I expected the number of dots to control the abilities of the dice.

Preety fun game!little bit hard to see the bullets but its fine

I like how you use dice and numbers on each die to indicate the player's heath. Nice idea and I had fun. I just wish I could be more powerful when I have a lot of dice. Anyway, great job!

A fun little game! I loved how the health of the enemies was represented through the numbers on a d6, as well as amassing a crew of dice. The 3rd level is definitely the best, though overall the game is a little confusing and mechanically shallow. That being said, I still enjoyed my time with it. Good work :)

Thanks for playing and the feedback! I’m glad you liked the army-of-dice moment :)

I thought it was quite simplistic at first but when I reached the 3rd level, I realized that there is a lot of potential in the level design. Great game.

I appreciate the feedback! I had ideas for other levels, including some that are divided (which let you control a die on either side of a wall), and others that are more of an escort task (guiding some endangered character safely across some gaps)…. maybe next time.

nice game! it was fun creating an army of dices! great work!!

Very nice game! The art and audio effects made it fell especially nice to play. The second level gave me some performance issues when enemies shot projectiles, but then again I'm playing on a low-end device :P

thanks for letting me know about the performance issue - I was a bit concerned about that as the size of that level took shape, good to know.

Its quite hard to understand whats going on when you die. The idea of having multiple dices is fun but i didnt understand at first. when you lost a life, you should add a feedback. Maybe not respawning at the beggining of the level. And yes, level design is not perfect. Maybe you should make your assets bigger and a simple level design.

I thought that one of my dices was an ennemy. Make real differences should be better.

Nice idea, though I feel that the theme was a bit underrepresented. Adding new dices to your "crew" was nice, though camera following just one of them and labyrinth-like levels don't work with that too good.

I originally implemented matching on the sides (pips) for the bullets to hit, and had a rolling mechanic for shuffling which bullet the player shot - the shuffle animation is still in there if you right-click (but it’s useless now)

I think if i were doing it again i’d go for a dice-gun that let the player control the probabilities of the gun’s output dice, and have that evolve with some variants (an odds-gun, an evens-gun, a less-than-three-gun, etc), then stick with the matching over the subtracting.