Submitted by Cole&Gram — 18 hours, 36 minutes before the deadline
Add to collection 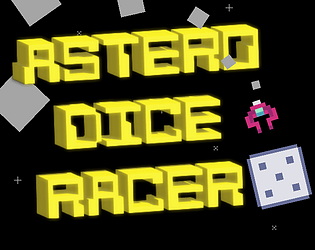 How does your game fit the theme?
The Roll of the Dice shows you the dice you have to touch with your ship.

Greaat game!! I loved how the fonts used totally match the game aesthetics.

Good game, it was fun.. controls are a bit hard, but it's space so it makes since im not armstrong :"D

Good take on the asteroids style game! I love the parallax of the stars.

Submitted
A Game with Dice
LikeReply
hzzzlnSubmitted193 days ago(+1)

Man I love when people manage to come up with self-balancing mechanics like this, really creative. Music, sounds and effects all fit perfectly, very nice all around!

Submitted
Role Of The Dicer
LikeReply
LanyardSubmitted193 days ago(+1)

The Dice really piled up quick! Would have loved some kind of power-ups or something here, too. Nice work! I've also made an Asteroids game in the past, it was fun! :)

Great take on a die roll based asteroid like game. FX are juicy and the game is challenging enough to keep you hooked.

It is really nicely executed and offers an interesting premise. The music is also really pleasant.

Some tips on the target dice mechanics would be nice to have at the start, but overall it's a very fun Astroid-like experience. Well done.

This game was fun, a little astroid-type game. Simple but enjoyable. I was confused at the target dice mechanic first but i got the hang of it. Great job!

Your game is amazing !

Thanks mate, your's too!

Controls of the ship were just like how it would be in space :D

Great job on the game! It is quite addictive (I made several games) and the mood is very good music matches very well what is going on + you even took time to do credits and menu! \o/

Cool little game, albeit a bit hard to control (i've never made more than 1 dice in a run). Nice to see audio !

Submitted
Dice in my Blood
LikeReply
WoumSubmitted194 days ago(+1)

That full speed chasing a dice not ended as good as I hoped :D.

I find it really interesting that you came with the idea of shooting wrong number and face hitting good ones :D.

Now I'll have to learn to be patient and play safe, I'm not sure if it's voluntary, but that's a nice way to think about the addiction around the dices.

It's not only in the them because there's dice, but it's also in the theme because, like in casino games, you shouldn't throw everything and hope for the best, there's a high probability that it ends badly!

(Now I can return pew pew some bad dices!)