Tumble uncontrollably through the air in this unique platformer. Made in 48 hours for GMTK Game Jam 2020.
Submitted by Pixelulsar (@Pixelulsar) — 30 minutes, 41 seconds before the deadline
Add to collection 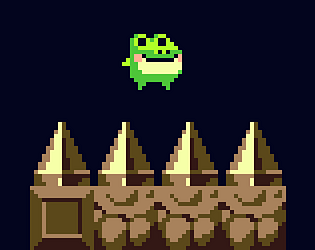 How does your game fit the theme?
It is a platformer where the player is "out of control" whenever they are in the air. Each jump and dash must be executed carefully because the player will flail and bounce until they come to rest on the ground again.

This is a great game. Pixel-art is amazing. My favourite animations were the frog, the dying ghost and the falling stars. Game was really hard at times, and even when the controles felt a bit floaty, the overall discontrol feeling of them was really well accomplished because it did not feel annoying. Great work!

Really fun game! The stun from jumping didn't feel out of place, but it did also get a little bit annoying if I jumped and landed on the same elevation. It feels like it would've been better if you feel to any platform lower than your starting elevation rather than on every jump. I also found myself getting stuck behind small ledges when I wanted to jump to a slightly elevated platform sometimes too (guessing because it was trying to bounce me off the wall but couldn't because I just immediately hit the floor again?) Also, the dead frog souls were a nice, subtle touch to highlight death (reminds me of how red goo splatters everywhere when you die in super meat boy, gives your death a feeling of permanence, like it actually matters more).

The level design was good and it was really satisfying to watch the frog get stunned and hurt himself with all the screenshake and whatnot. It really felt like he was hitting the walls and ground hard, which was strangely satisfying (does that make me a bad person? lol.) There were some areas where it felt like I needed to do really precise platforming. This isn't a bad thing, but I got stuck on the last jump of the final part right before the final free fall for probably 2-3 minutes. I got a bit impatient and was bordering on quitting when I finally got it by narrowly missing a wall spike.

That being said, most of these things are just minor nitpicks. Overall, this was a genuinely fun game. I really enjoyed it a lot and if you continue development, I think you'd have a really good game on your hands.

This was super freaking fun! Congrats on that, the stun for the single height jump got the teensy-iest annoying but this was just a fun polished game. It's one of my favorite games that I've played during this jam.

I think you could have gone with different colors for your graphics, something that pops more. Perhaps a gray for the platforms with that background. Also adding some texture to the background, but not too much, would add some visual dynamism. Music for this would be so great, something to just add the right amount of anxiety and panic (lol). Sincerely though, this was really well done! If you could give ours a play, I would appreciate it!

One of the cleaner submissions i have played so far! I would have loved something more once you bet the game, like a little end screen or something but other then that I have no real complaints. Real fun

I also played it and thought it was very charming. Well done!

Amazing! Really satisfying controls, and the jumps you pull off must have taken so long to get just right. Level design is great at leading you to the answer without beating you over the head. All together great little game and great use of the theme!

Simple but very effective graphics, chip tunes to match, and a great gameplay hook that fits the theme well.

Only wish the “dizzy” animation were a little quicker so I could get back into it sooner.

By far the best game I’ve played from the jam entries!

Great game, so addicting, the mechanics in the dash were well made, the only bad thing i could find was the fact i was not capable of move around with the WASD keys, beside that,  a perfect game, beautiful graphics too

I hope you continue working on the game, you did a great job!

the game is well balanced for the GMTK 2020 theme

On of my favorites ! great job !

Stunning pixelart and animations! playing the game was also very enjoyable especially large falls when your character bounces around wildly.
Only thing is the landing recovery were abit too annoying, maybe make them shorter or only happen after large falls.
Great submission overall!

Awesome, very unique mechanic. Though sometimes it wasn't very clear what to do next and unintentionally bouncing past a checkpoint was quite annoying . The only thing that really bugged me out was the fact that frog gets stunned for a while even after the smallest of jumps ;)

All in all - fantastic concept, pleasing graphics, fast gameplay (with fast restarts).

Also, that careful placement of some platforms (so that frog could smoothly bounce from one to another) must've taken some time to arrange, but it was definitely worth it!

Really love the retro-vibe of the game and the movement system is really nice!

OMG, the chaos of pinball bouncing with more gravity and the design of the game it is very solid entry :) great job :)

Submitted
The Key to Victory
LikeReply
Jonny SwalesSubmitted192 days ago

I like it! the level design is really solid.

The idea it's pretty cool and funny! good work!

I loved the concept! Very hard and cool, well done!